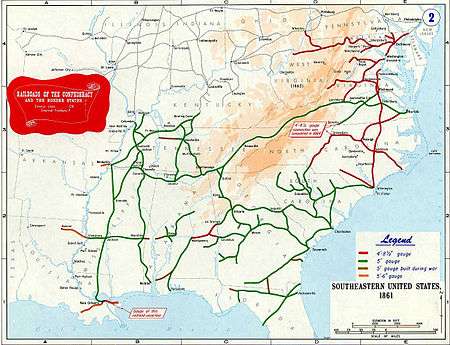 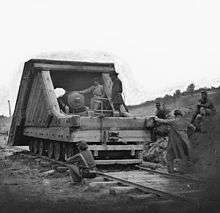 A railway mounted gun and its crew, used during the Siege of Petersburg.

During the American Civil War, the Confederate States Army depended heavily on railroads to get supplies to its lines. The system was fragile and was designed for short hauls of cotton to the nearest river or ocean port. During the war, new parts were very hard to obtain, and the system deteriorated from overuse, lack of maintenance, and systematic destruction by union raiders.[1]

The outbreak of war had a depressing effect on the economic fortunes of the Confederate railroad industry. With the cotton crop being hoarded in an attempt to entice European intervention (See King Cotton) railroads were bereft of their main source of income.[2] Many were forced to lay off employees, and in particular, let go skilled technicians and engineers.[2] Due to a general sentiment that the war would not last long, initially Confederate rail operators did not seek, nor build, alternative sources of iron for rail construction and repair.[3]

Although railroad contracts to port-towns had ceased, due to the combined effects of the Cotton export policy and the Union naval blockade, lucrative government contracts were doled out to rail operators with lines supplying men and arms to the front line of Tennessee and Virginia.[2] A consortium of rail operators had decided upon a universal rate for government contracts; "a uniform rate of two cents a mile for men and half the regular local rate for munitions, provisions, and material, and also agreed to accept Confederate bonds at par in payment of government transportation."[4]

In addition, the Confederacy suffered from two key railroad deficiencies. The first was the lack of a true rail network; instead, rail lines usually connected ports and river terminals to points inland. This lack of inter-railway connections caused many railroads to become useless once the Union blockade was in place. A second concern was a break of gauge; much of the Confederate rail network was in the broad gauge format, but much of North Carolina and Virginia had standard gauge lines. Southern railroads west of the Mississippi were isolated, disconnected, and differed widely in gauge.[5]

As troop movement began in earnest in May and June 1861, a crippling problem was discovered; many rail lines terminated in towns without connecting to continuing lines.[6] Instead, cargo would have to be unloaded, driven across town, and then reloaded. Soldiers, and other passengers, would often have to stay overnight to catch a continuing train the next day.[6] When the Confederate government attempted to rectify this problem, they ran into local opposition. Towns preferred the lack of connection, since it required the hiring of teamsters and populated hotels with guests.[6] Railroad operators, while not opposed to connecting lines, were opposed to the possibility of sharing rolling stock with rival companies.[6]

In April 1863, the presidents of the southern railroads again convened in Richmond and again addressed Secretary Seddon on the condition of the rails and appealed to Congress for remedial legislation...No record is available which shows that these recommendations were acted upon by the confederate government.[7]

As 1862 opened, the Confederacy built a 5.5 miles (8.9 km) spur off the Orange and Alexandria Railroad at Manassas Junction toward Centreville, Virginia known as the Centreville Military Railroad. It served to supply the Confederate defenses on the Centreville Plateau along the north side of the Bull Run feed into the Occoquan River.

As the war waged on attempts were made by railroad operators to acquire railroad supplies abroad, necessitated by the Confederacy's small industrial base.[8] The problem of supplies had become increasingly acute, especially with respect to the already small supply of engines and cars. Stressed by overuse, lacking material to make repairs, and the conscription of men who could make them, rail operators were predicting a breaking point as early as 1862.[9] While railroad operators attempted, throughout the war, to get assistance from the Confederate Congress, the response was either indifferent or hostile.[8]

It was not until mid-1863 that the Confederate government initiated an overall policy concerning railroads, and even then it was confined solely to aiding the war effort.[7] With the legislation of impressment the same year, railroads and their rolling stock came under the de facto control of the military. In March 1864, the Quartermaster General ordered all passenger trains to give governmental trains the right of way.[10] By mid-1864, all passenger service in the Confederacy had come to a standstill.[10] Transport of goods for civilian use was also affected, exacerbating shortages brought on by wartime devastation, rampant speculation and hoarding, and the Confederacy's impressment policy.[10]

In the last year before the end of the war, the Confederate railroad system was always on the verge of collapse. The impressment policy of quartermasters ran the rails ragged. Feeder lines would be scrapped for replacement steel for trunk lines, and the continual use of rolling stock wore them down faster than they could be replaced.[11]

As the Union armies pushed further into Confederate territory, they came into ownership of former Confederate railway lines, or what was left of them. Confederate troops generally applied a scorched-earth policy towards railroads when they were in retreat.[12] Union troops would often have to rebuild an entire line from scratch for it to be usable.[12] Due to the vagaries of the war, some lines would be rebuilt 6 or 7 times by differing sides, especially in states like Virginia, where fighting was most intense.[12][13]