Nevada in the American Civil War

During the American Civil War, Nevada's entry into statehood in the United States was expedited by Union sympathizers in order to ensure Nevada's participation in the 1864 presidential election in support of President Abraham Lincoln.

In total, Nevada sent 1,200 men to fight for the Union during the civil war; but its main contribution to the cause was $400 million in silver from the Comstock Lode, which was used to finance the war. In addition, the state hosted a number of Union posts. 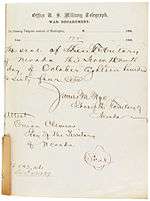 Signature page for the telegraph transmission of the first Nevada State Constitution, October 1864. The handwritten annotation shows the word count (16,543) and cost ($4303.27).

Nevada's entry into full statehood in the United States was expedited. Union sympathizers were so eager to gain statehood for Nevada that they rushed to send the entire state constitution by telegraph to the United States Congress before the presidential election and they did not believe that sending it by train would guarantee that it would arrive on time. The constitution was sent October 26–27, 1864,[1] just two weeks before the election on November 7, 1864. The transmission took two days; it consisted of 16,543 words and cost $4303.27 ($59,294.92 in 2010 dollars) to send.[1][2] It was, at the time, the longest telegraph transmission ever made, a record it held for seventeen years, until a copy of the 118,000-word Revised Version of the New Testament was sent by telegraph on May 22, 1881.[3][4]

Nevada had fewer than 40,000 inhabitants when it gained statehood, far fewer than the initial population of any other state (though this was not a legal barrier to statehood.)[5] President of the United States Abraham Lincoln wanted an additional Northern state that would presumably vote for his reelection, and help force pro-Northern ideas into new amendments to the United States Constitution.

In total, Nevada sent 1,200 men to fight for the Union.[6] In May, 1863, Nevada raised a battalion of cavalry the 1st Battalion Nevada Volunteer Cavalry. In summer of 1864, a battalion of infantry, 1st Battalion Nevada Volunteer Infantry was mustered in. The adjutant-general of Nevada reported that since the beginning of the Civil War 34 officers and 1,158 enlisted men had voluntarily enlisted in the service of the United States from Nevada. These troops were not used against the southern armies, but protected the central overland route and settlements on the frontier from the Indians. With the units of California Volunteers engaged in the same service, they made incursions into Indian country, exploring large sections of territory which had never been entered by American forces, and had frequent skirmishes with the Indians.[7]

However, Nevada's main contribution to the war was the Comstock Lode, whose silver totaling $400 million financed the Union Civil War effort to defeat the southern states. A common belief is that Nevada achieved early statehood due to its silver, but as the Union already had Nevada's silver due to Nevada being its territory, its statehood was due to political concerns, not economic.[8]

There were several sympathizers to the Confederate States of America in Nevada during the War; in fact, of the "Pacific Coast" states, none had more southern supporters.[9] In Virginia City, in particular, sentiment towards the warring sides was split evenly. However, in strict military fashion any strong sentiment that was pro-Confederate was struck down as Union army soldiers arrested the sympathizers and jailed them at Fort Churchill. The only time a Confederate flag was flown in the state was at a stone saloon, and defended at gunpoint by one of the saloon's owners until the owner's partner convinced him to change the flag to the United States flag before troops from Fort Churchill forced the matter, causing the commander of Fort Churchill to feel additional paranoia about pro-Confederate sympathies in mining camps, and throughout the war Nevada would be under martial law. [10]

One organization particularly pro-Union was the Virginia City Fire Department. Many of them were originally from New York, and had strong feelings for the New York Fire Zouaves, who many had known when they lived back east. When news arrived of the Union defeat at the First Battle of Bull Run, with the New York Fire Zouaves in particular suffering heavy casualties, it was determined by the Virginia City firemen that they would book no celebrations by pro-Confederates, and they bullied any southern sympathizer they met that day by fist and weapons.[6]