Divonne-les-Bains is a commune in the Ain department in eastern France.

Divonne-les-Bains is a spa town situated on the border with French-speaking Switzerland, between the foot of the Jura mountains and Lake Geneva. It is situated in the Pays de Gex, about eight km from Gex, from which the area takes its name. Divonne is about 20 km from Geneva to the south-west and 10 km from Nyon to the east. Since 2012 Divonne forms part of a wider agglomeration known as Grand Genève. 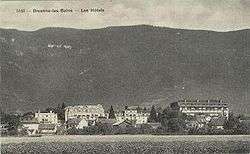 A short way above the town there are several springs, which were exploited in the 19th century to provide spa facilities for which Divonne became renowned.

The golf course was built in the 1930s. Many of its present-day amenities - casino, hippodrome, open air swimming pool and artificial lake (Lac de Divonne) - were built after 1945. The Casino de Divonne was opened in 1954. A cultural centre by the lake (L'Esplanade du lac) was completed in 2005. Divonne used to host a small chamber music festival every summer, centred on its tiny theatre and the Domaine de Divonne.

There is a lively market on Sundays and a succession of cultural and sporting events throughout the year. 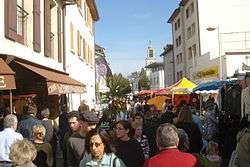 The Sunday market in Divonne

Origin of the name Divonne

A number of etymologies are suggested:

1) Divona, Devona - the name of a Gaulish goddess of a sacred spring providing water for the city that is now Bordeaux, invoked in a 4th-century Latin poem by Ausonius. The Latin quatrain was engraved on a stone tablet above a spring at Divonne in the nineteenth century by persons erroneously supposing that Divonne was referred to. It can still be seen near the Casino.

2) Conflation of the Latin word divis (rich, abundant) and the word Ona or Ana, for a flowing river (as in the river Rhone)

(Section still under construction) From the second century B.C. the Romans progressively conquered and settled the mostly Celtic area north of the Alps and west to Lake Geneva. Julius Cesar decisively defeated the Helvetii in 58 B.C. Roman settlements flourished in Nyon and Geneva. The natural springs of Divonne were appreciated by the Romans, who built an aqueduct of about 11 km from Divonne to Nyon to supply water to their garrison. Many traces of this aqueduct have been found, and continue to be found and excavated, often as new building developments are undertaken (see, for example, this note from the Roman Museum at Nyon). From the fifth century A.D. the Burgundians became dominant in the area, following the decline of the Empire and the withdrawal of the Romans.[2] In the Middle Ages Divonne's name emerges, as a parish and in the context of its fortified castle and feudal owners.

In the twelfth century the parish of Divonne was part of the diocese of Geneva.

By the beginning of the twelfth century the Lords of Divonne, in the fiefdom of the lords of Gex, had constructed a fortified castle, on the site of the present Chateau de Divonne. In 1123 Walcher de Divonne and his brother Etienne made a donation to the monastery of nearby Bonmont, constituting the foundation of Bonmont Abbey

In 1225 Amadeus II, the Lord of Gex gifted the fiefdom of Divonne to the monastery of Saint-Claude, free from feudal ties and taxes. Sixty years later in 1285, Léonète, the Lady of Gex, and her son Pierre petitioned Amadeus V of Savoy for the return of the castle to them. Its use was assured in 1295 by Pierre's marriage to Jeanne, daughter of Louis of Savoy and widow of Guillame de Joinvile, Lord of Gex.

The Lord of Divonne in 1356 was Amé II de Joinville, whose daughter Aymonette married Jacques de Gingins. Her descendant, Laurent de Gignins, was the last of his line to be Lord of Divonne. He had married Jeanne de Symond, and following his death in 1653, she married Gilbert I de La Forest of Savoy. She bequeathed the Divonne estate to him, and it was retained in the family until 1789.

Earlier, under the Treaty of Lyon (1601), the Pays de Gex had definitively become part of France and the lordship of Divonne thus came under the jurisdiction of the King of France. The son of Gilbert, Albert-Eugenie de La Forest, accordingly left Savoy and settled in Divonne as a French subject. As the principal Barony of the Pays de Gex, Divonne thus became the administrative centre of a considerable area.

Although the French Revolution had deprived the aristocracy of much of their assets, Louis de la Forest was able recover some of his land including forests in the Jura, and in 1827 he was named as a hereditary member of the "Chambre des Pairs" (Chamber of Peers) under the constitution of the Restoration. During the eighteenth century the old castle was demolished and the present Chateau built.

At this time the population of Divonne was just over 1000.

The town is home to over 8000 people (2011), some 23% of whom are classified as immigrants - i.e. were not born in France, a high figure reflecting Divonne's proximity to, and involvement with, the international community centred on Geneva.

Divonne was the terminus of a railway line linking it to Gex and Bellegarde, and thus eventually to Paris. The line from Bellegarde was inaugurated in 1889, and eventually closed by SNCF in 1980, against the will of the Ain departmental administration. From 1905 Divonne was also linked by rail to Nyon, via Crassier on the border. The line was closed during the Second World War, re-opened in 1949 and finally closed in 1962. Divonne railway station can still be seen in the town centre, although its future is now in some doubt as the Divonne council considers ways to develop the area surrounding and including the station. An SNCF administrative office still functions in the station for the purchase of tickets from any SNCF departure point.

Since 2012 a bus service operates connecting Divonne to the Swiss rail network at Coppet, offering a fast link to Geneva.

A regular bus service runs between Divonne and Bellegarde.

It is safe to assume that the historical economy of the settlement of Divonne and its surroundings in the Pays de Gex was one of agriculture and forestery. The Divonne river provided power for water mills, and it is said that the present-day thermal spa is built on the site of a diamond-cutting works, powered by a water wheel on the Divonne river. It was in the nineteenth century that Divonne's potential as a Spa was recognised. (This section, charting the Spa from then till now is under construction). (Section also under construction to show the economy post-war till now including Casino, tourism and dormitory for cross-frontier workers).

The town is well provided with recreational facilities including a 50m open-air swimming pool, football pitches, tennis club, golf course, and a 3.3 km path around the lake for walkers and cyclists, with exercise points. Along a path between the lake and Hippodrome there is a scale representation of the sun and planets of the solar system. Each planet is shown with its astrological symbol and a brief summary of its composition, mass, density distance from the sun, and size relative to the sun.