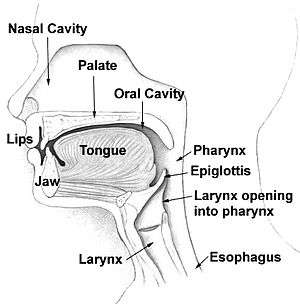 In linguistics (articulatory phonetics), tongue shape describes the shape that the tongue assumes when making a sound. Tongue shape is primarily important for the sibilant sounds. Because these sounds have such a high perceptual prominence, small changes in tongue shape are easily audible, and can be used to produce different speech sounds, even within a given language.

For non-sibilant sounds, the relevant variations in tongue shape can be adequately described by the concept of secondary articulation, in particular palatalization (raising of the middle of the tongue), velarization (raising of the back of the tongue) and pharyngealization (retracting of the root of the tongue). Usually, only one of these secondary articulations can co-occur with a given sound. In addition, the acoustic quality of velarization and pharyngealization is very similar; as a result, no language uses both of these articulations contrastively. (That is, no language has two sounds that differ only in one being velarized while the other is pharyngealized.)

The following varieties of tongue shapes are defined for sibilants, from sharpest and highest-pitched to dullest and lowest-pitched:

The latter three types of sounds are often known as "hushing" sounds because of their quality, as opposed to the "hissing" grooved sounds. Note that palatalization is an inherent part of the definition of the above varieties, and cannot normally be varied independently.

This article is issued from Wikipedia - version of the 8/21/2015. The text is available under the Creative Commons Attribution/Share Alike but additional terms may apply for the media files.