Unicode supports several phonetic scripts and notations through the existing writing systems and the addition of extra blocks with phonetic characters. These phonetic extras are derived of an existing script, usually Latin, Greek or Cyrillic. In Unicode there is no "IPA script". Apart from IPA, extensions to the IPA and obsolete and nonstandard IPA symbols, these blocks also contain characters from the Uralic Phonetic Alphabet and the Americanist Phonetic Alphabet.

The International Phonetic Alphabet (IPA) makes use of letters from other writing systems as most phonetic scripts do. IPA notably uses Latin, Greek and Cyrillic characters. Combining diacritics also adds meaning to the phonetic text. Finally, these phonetic alphabets make use of modifier letters, that are specially constructed for the phonetic meaning. A "modifier letter" is strictly intended not as an independent grapheme but as a modification of the preceding character[1] resulting in a distinct grapheme, notably in the context of the International Phonetic Alphabet. For example, ʰ should not occur on its own but modifies the preceding or following symbol. Thus, tʰ is a single IPA symbol, distinct from t. In practice, however, several of these "modifier letters" are also used as full graphemes, e.g. ʿ as transliterating Semitic ayin or Hawaiian okina, or ˚ transliterating Abkhaz ә.

From IPA to Unicode

The following tables indicates the Unicode code point sequences for phonemes as used in the International Phonetic Alphabet. A bold code point indicates that the Unicode chart provides an application note such as "voiced retroflex lateral" for U+026D ɭ LATIN SMALL LETTER L WITH RETROFLEX HOOK (HTML &#621;). An entry in bold italics indicates the character name itself refers to a phoneme such as U+0298 ʘ LATIN LETTER BILABIAL CLICK (HTML &#664;) 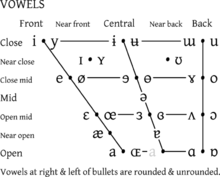 From Unicode blocks to scripts

Not to be confused with Extensions to the IPA.
Main article: IPA Extensions (Unicode block)

The characters in the "Spacing Modifier Letters" block are intended as forming a unity with the preceding letter (which they "modify"). E.g. the character U+02B0 ʰ MODIFIER LETTER SMALL H isn't intended simply as a superscript h (h), but as the mark of aspiration placed after the letter being aspirated, as in pʰ "aspirated voiceless bilabial plosive". The block contains:

This block, together with Phonetic Extensions Supplement below, contains: