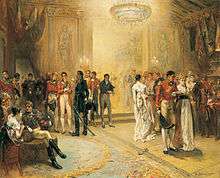 The Duchess of Richmond's Ball by Robert Alexander Hillingford (1870s).

Elizabeth Longford described it as "the most famous ball in history".[1] "The ball was certainly a brilliant affair",[2] at which "with the exception of three generals, every officer high in [Wellington's] army was there to be seen".[3]

According to Lady Georgiana, a daughter of the Duchess,

Lady Louisa, another of the Duchess's daughters, recalled:

While the exact order of the dances at this ball is not known, there is a comment from a contemporary critical observer about the season in Brussels: 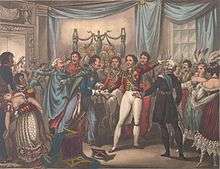 Intelligence of the Battle of Ligny (1818) by William Heath, depicting a Prussian officer informing the Duke of Wellington that the French have crossed the border at Charleroi and that the Prussians would concentrate their army at Ligny.

Arthur Wellesley, 1st Duke of Wellington with his intimate staff arrived some time between 11 pm. and midnight. [lower-alpha 3] Shortly before supper, which started around 1 am.,[7] Henry Weber, an aide-de-camp to the William, Prince of Orange, arrived with a message for the Prince. The Prince handed it to Arthur Wellesley, 1st Duke of Wellington, who pocketed it unopened. A short time later Wellington read the message—written at around 10 pm., it reported that Prussian forces had been forced by the French to retreat from Fleurus. As Fleurus is north-east of Charleroi this meant that the French had crossed the river Sambre (although Wellington couldn't tell from this message in what strength)— Wellington requested the Prince to return to his headquarters immediately, and then after issuing a few more orders went into supper, where he sat between Lady Frances Webster and Lady Georgiana. To his surprise the Prince of Orange returned and in a whisper informed him of another dispatch, this one sent by Baron Rebecque to the Prince's headquarters at Braine-le-Comte, and dated 10:30 pm. It informed the Prince that the French had pushed up the main Charleroi to Brussles road nearly as far as Quatre Bras.[lower-alpha 4] After repeating to the Prince that he should return to his headquarters, Wellington continued to sit at the table and make small talk for 20 minutes more, before announcing that he would retire to bed. He rose from the supper-table and:[8]

The atmosphere in the room changed when news circulated among the guests that the French were crossing the border: 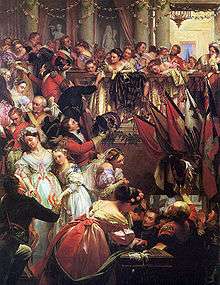 Before Waterloo (1868), by Henry O'Neil, depicting officers departing from the Duchess of Richmond's ball

Katherine Arden daughter of Richard Arden, 1st Lord Alvanley described the events towards the end of the ball and the rest of the night: 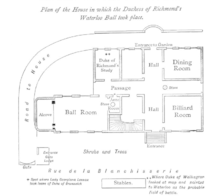 At the time of the ball no accurate record was kept of the location of the ballroom. In 1887 a plan of the house was published by Lady De Ros (daughter of the Duchess of Richmond), provided by her brother, who were both resident in the house. It was later reprinted in "Reminiscences of Lady de Ros" by the Honourable Mrs J. R. Swinton, her daughter.[10]

The coach house, proposed by Sir William Fraser in 1888 as the likely location of the ball.

Sir William Fraser examined the site and concluded that the room proposed as the ballroom by Lady de Ros was too small a space for the number of people who attended the ball.[11] A short time after his visit, he wrote a letter to the The Times which was published on 25 August 1888. He reported that he had likely discovered the room and that it was not part of the principal property that the Duke of Richmond had rented on the Rue des Cendres, but was a coach house that backed onto the property and had an address in the next street, the Rue de la Blanchisserie. The room had dimensions of 120 feet (37 m) long, 54 feet (16 m) broad, and about 13 feet (4.0 m) high (the low ceiling was a case where reality impinged on one meaning of Lord Byron's artistic allusion to "that high hall").[12][13]

Research by lawyer P. Duvivier and published by Fleischman and Aerts in their 1956 book Bruxelles pendant la bataille de Waterloo put forward an alternative theory. It proposes that, unknown to Fraser, the coach house used as a ballroom had been demolished by the time of his investigations and that the building he assumed was the ballroom was not built until after 1815.[14]

The following were sent invitations to the ball:[lower-alpha 6] 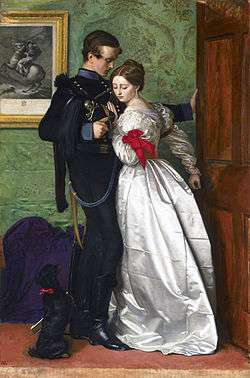 The Black Brunswicker by Millais.

The ball inspired a number of writers and artists in the nineteenth century.[21] Sir Walter Scott mentioned it in passing in Paul's Letters to his Kinsfolk.[22] It was described by William Makepeace Thackeray in Vanity Fair and by Lord Byron in Childe Harold's Pilgrimage. Byron emphasises the contrast between the glamour of the ball and the horror of battle, concentrating on the emotional partings,

Thackeray's dramatic use of the ball in Vanity Fair inspired, in turn, a number of screen depictions. One notable example comes from the 1935 RKO production Becky Sharp, the first full-length Technicolor film released after perfection of the full-color three-strip method,[24][25] which makes the Duchess of Richmond's Ball the first historical set-piece ever staged in a full-colour feature film.[26] Critics of the day were not kind to the picture itself, but the sequence in which the officers hurry to leave the ball — the red of their coats suddenly and emotionally filling the frame — was widely praised as showing great promise for the dramatic use of colour on-screen.[27]

The ball also inspired artists, including John Everett Millais, who painted The Black Brunswicker in 1860, Henry Nelson O'Neil who painted Before Waterloo in 1868 and Robert Hillingford who painted The Duchess of Richmond's Ball.[28]

The ball was a scene in the third act of a melodrama called In the Days of the Duke written by Charles Haddon Chambers and J. Comyns Carr, it was displayed sumptuously in the 1897 production, with a backdrop by William Harford showing the hall and staircase inside the Duchess's house.[29][30][31]

Several characters attend the ball in Georgette Heyer's 1937 novel An Infamous Army, and also in her novelisation of the life of Sir Harry Smith, 1st Baronet, The Spanish Bride.

The ball was used by Sergei Bondarchuk in his 1970 film Waterloo for dramatic effect. Bondarchuk contrasted an army at peace with the impending battle and in particular as a dramatic backdrop to show how completely Napoleon managed to "humbug" Wellington.

In the novel Sharpe's Waterloo (1990), Bernard Cornwell uses the ball in a similar way to Bondarchuk, placing his character Richard Sharpe in the role of the aide who brings the catastrophic news to Wellington, but includes a sub-plot where Sharpe brawls with Lord John Rossendale, Sharpe's wife's lover and a man who owes Sharpe money.

A fictional account is given of the Duchess of Richmond's ball in The Campaigners, Volume 14 of The Morland Dynasty, a series of historical novels by author Cynthia Harrod-Eagles. Some of the fictional Morland family and other characters attend the ball and the events that unfold are seen and experienced through their eyes.

The ball serves as the backdrop for the first chapter of Julian Fellowes's 2016 novel, Belgravia. The chapter is titled, "Dancing into Battle," and portrays a potential mésalliance that is avoided the next day by a battlefield fatality at Quatre Bras. Fellowes incorporates into his book actual occurrences at the ball, and inserts a fictional protagonist, James Trenchard, into the famous private conversation between the Duke of Richmond and the Duke of Wellington. This actual conversation prompts a premature end of the ball, and in the resulting confusion, there is a misunderstanding that Fellowes plays with throughout the remainder of his wonderful book.

On 15 June 1965 the British Ambassador in Brussels held a ball to commemorate the 150th anniversary of the Battle of Waterloo and the Duchess of Richmond's ball. 540 guests attended the function of whom the majority were Belgians.[32] This commemoration ball has now become an annual event with the money raised going to support several charities.[33][34]