"Closed sea" redirects here. For the legal concept in opposition to 'freedom of the seas', see Mare clausum. 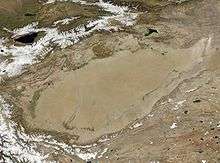 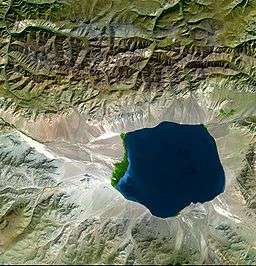 An endorheic basin (also endoreic basin) (from the Ancient Greek: ἔνδον, éndon, "within" and ῥεῖν, rheîn, "to flow") is a closed drainage basin that retains water and allows no outflow to other external bodies of water, such as rivers or oceans, but converges instead into lakes or swamps, permanent or seasonal, that equilibrate through evaporation. Such a basin may also be referred to as a closed or terminal basin or as an internal drainage system.

Normally, water that has accrued in a drainage basin eventually flows out through rivers or streams on the Earth's surface or by underground diffusion through permeable rock, ultimately ending up in the oceans. However, in an endorheic basin, rain (or other precipitation) that falls within it does not flow out but may only leave the drainage system by evaporation and seepage. The bottom of such a basin is typically occupied by a salt lake or salt pan.

Endorheic regions, in contrast to exorheic regions which flow to the ocean in geologically defined patterns, are closed hydrologic systems. Their surface waters drain to inland terminal locations where the water evaporates or seeps into the ground, having no access to discharge into the sea.[1] Endorheic water bodies include some of the largest lakes in the world, such as the Aral Sea (formerly) and the Caspian Sea, the world's largest saline inland sea.[2]

Most endorheic basins are arid, although there are many notable exceptions, such as the Valley of Mexico, the Lake Tahoe region, and various regions in the Caspian Basin.

Endorheic basins can be massively and rapidly affected by climate change and excessive water abstraction. An exorheic lake naturally remains at an overflow level, so water flow into the lake may be many times more than is needed to maintain its present size. In contrast, an endorheic basin does not have enough inflow that it overflows to the ocean, so any loss of water intake can immediately begin to shrink the lake. In the past century or so, many very large endorheic lakes have been reduced to small remnants of their former size, as with Lake Chad and Lake Urmia, or gone completely as have Tulare Lake and Fucine Lake. The same effect was seen at the end of the Ice Age, in which many extremely large lakes in the Sahara and western United States disappeared or were drastically reduced, leaving behind desert basins, salt pans and remnant saline lakes.

Endorheic lakes are bodies of water that do not flow into the sea. Most of the water falling on Earth finds its way to the oceans through a network of rivers, lakes and wetlands. However, there is a class of water bodies that are located in closed or endorheic watersheds where the topography prevents their drainage to the oceans. These endorheic watersheds (containing water in rivers or lakes that form a balance of surface inflows, evaporation and seepage) are often called terminal lakes or sink lakes.[3]

Endorheic lakes are usually in the interior of a landmass, far from an ocean in areas of relatively low rainfall. Their watersheds are often confined by natural geologic land formations such as a mountain range, cutting off water egress to the ocean. The inland water flows into dry watersheds where the water evaporates, leaving a high concentration of minerals and other inflow erosion products. Over time this input of erosion products can cause the endorheic lake to become relatively saline (a "salt lake"). Since the main outflow pathways of these lakes are chiefly through evaporation and seepage, endorheic lakes are usually more sensitive to environmental pollutant inputs than water bodies that have access to oceans, as pollution can be trapped in them and accumulate over time.[2] 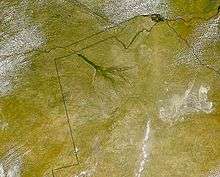 The Okavango Delta (centre) of southern Africa, where the Okavango River spills out into the empty trough of the Kalahari Desert. The area was a lake fed by the river during the Ice Ages.

Endorheic regions can occur in any climate but are most commonly found in desert locations. In areas where rainfall is higher, riparian erosion will generally carve drainage channels (particularly in times of flood), or cause the water level in the terminal lake to rise until it finds an outlet, breaking the enclosed endorheic hydrological system's geographical barrier and opening it to the surrounding terrain. The Black Sea was likely such a lake, having once been an independent hydrological system before the Mediterranean Sea broke through the terrain separating the two. Lake Bonneville was another such lake, overflowing its basin in the Bonneville flood. Malheur/Harney Lake in Oregon is normally cut off from drainage to the ocean, but has an outflow channel to the Malheur River that is normally dry, but flows in years of peak precipitation.

Examples of relatively humid regions in endorheic basins often exist at high elevation. These regions tend to be marshy and are subject to substantial flooding in wet years. The area containing Mexico City is one such case, with annual precipitation of 850 mm and characterized by waterlogged soils that require draining.[4]

Endorheic regions tend to be far inland with their boundaries defined by mountains or other geological features that block their access to oceans. Since the inflowing water can evacuate only through seepage or evaporation, dried minerals or other products collect in the basin, eventually making the water saline and also making the basin vulnerable to pollution.[2] Continents vary in their concentration of endorheic regions due to conditions of geography and climate. Australia has the highest percentage of endorheic regions at 21 percent while North America has the least at 5 percent.[5] Approximately 18 percent of the earth's land drains to endorheic lakes or seas, the largest of these land areas being the interior of Asia.

In deserts, water inflow is low and loss to solar evaporation high, drastically reducing the formation of complete drainage systems. Closed water flow areas often lead to the concentration of salts and other minerals in the basin. Minerals leached from the surrounding rocks are deposited in the basin, and left behind when the water evaporates. Thus endorheic basins often contain extensive salt pans (also called salt flats, salt lakes, alkali flats, dry lake beds or playas). These areas tend to be large, flat hardened surfaces and are sometimes used for aviation runways or land speed record attempts, because of their extensive areas of perfectly level terrain.

Both permanent and seasonal endorheic lakes can form in endorheic basins. Some endorheic basins are essentially stable, climate change having reduced precipitation to the degree that a lake no longer forms. Even most permanent endorheic lakes change size and shape dramatically over time, often becoming much smaller or breaking into several smaller parts during the dry season. As humans have expanded into previously uninhabitable desert areas, the river systems that feed many endorheic lakes have been altered by the construction of dams and aqueducts. As a result, many endorheic lakes in developed or developing countries have contracted dramatically, resulting in increased salinity, higher concentrations of pollutants, and the disruption of ecosystems.

Even within exorheic basins, there can be "non-contributing", low-lying areas that trap runoff and prevent it from contributing to flows downstream during years of average or below-average runoff. In flat river basins, non-contributing areas can be a large fraction of the river basin, e.g. Lake Winnipeg's basin.[6] A lake may be endorheic during dry years and can overflow its basin during wet years, e.g., the former Tulare Lake.

Because the Earth's climate has recently been through a warming and drying phase with the end of the Ice Ages, many endorheic areas such as Death Valley that are now dry deserts were large lakes relatively recently. During the last ice age, the Sahara may have contained lakes larger than any now existing.[7] 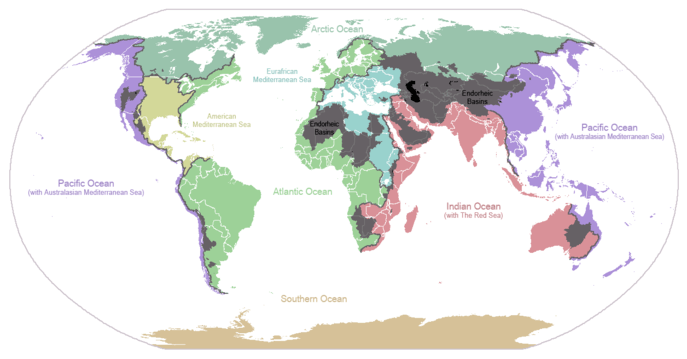 Endorheic lakes in Antarctica are located in the McMurdo Dry Valleys, Victoria Land, the largest ice-free area in Antarctica. 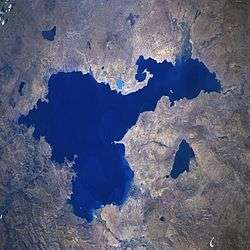 Much of western and Central Asia is a giant endorheic region made up of a number of contiguous closed basins. The region contains several basins and terminal lakes, including:

Other endorheic lakes and basins in Asia include: 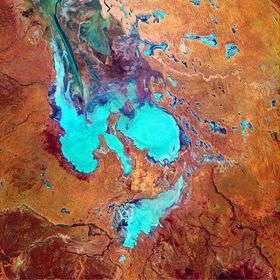 Australia, being very dry and having exceedingly low runoff ratios due to its ancient soils, has many endorheic drainages. The most important are:

Large endorheic regions in Africa are located in the Sahara Desert, the Kalahari Desert, and the East African Rift: 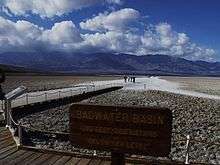 The dry lake in the Badwater Basin in Death Valley National Park.

Many small lakes and ponds in North Dakota and the Northern Great Plains are endorheic; some of them have salt encrustations along their shores.

The Lasithi Plateau in Crete

Though a large portion of Europe (about 19%, located in Russia and Kazakhstan) drains to the endorheic Caspian Sea, Europe's wet climate means it contains relatively few terminal lakes itself: any such basin is likely to continue to fill until it reaches an overflow level connecting it with an outlet or erodes the barrier blocking its exit. Exceptions include:

All these lakes are drained, however, either through manmade canals or via karstic phenomena. Minor endorheic lakes exist throughout the Mediterranean countries of Spain (e.g. Laguna de Gallocanta, Estany de Banyoles), Italy, Cyprus (Larnaca and Akrotiri salt lakes) and Greece. 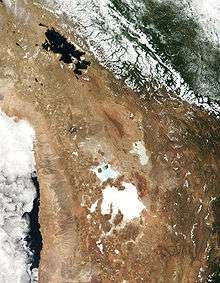 MODIS image from November 4, 2001 showing Lake Titicaca, the Salar de Uyuni, and the Salar de Coipasa. These are all parts of the Altiplano

Some of the Earth's ancient endorheic systems and lakes include: