Many members are also part of the Republican Study Committee, another conservative House group.[8][9] The caucus is sympathetic to the Tea Party movement.[10] According to its mission statement, "The House Freedom Caucus gives a voice to countless Americans who feel that Washington does not represent them. We support open, accountable and limited government, the Constitution and the rule of law, and policies that promote the liberty, safety and prosperity of all Americans."[11]

The origins of the Caucus lie at the mid-January 2015 Republican congressional retreat in Hershey, Pennsylvania. Raúl Labrador and eight other representatives met separately from the main group to plan their own agenda. The group debated over a name for their new caucus, eventually settling on the "Freedom Caucus" because, according to founding member Mick Mulvaney, "it was so generic and universally awful that we had no reason to be against it." The group started with nine initial members in Hershey, who set as a criterion for new members that they had to be willing to vote against Speaker of the United States House of Representatives John Boehner on legislation that the group opposed.[12]

During the crisis over the funding of the Department of Homeland Security in early 2015, the Caucus offered four plans for resolution, but all were rejected by the Republican leadership. Politico reported that one of the caucus leaders, Labrador of Idaho, said the Caucus will offer an alternative that the most conservative Republican members could support.[13]

The Caucus was involved in the resignation of Boehner on September 25, 2015, and the ensuing leadership battle for the new Speaker.[14] Members of the Caucus who had voted against Boehner for Speaker felt unfairly punished, accusing him of cutting them off from positions in the Republican Study Committee and depriving them of key committee assignments. Boehner found it increasingly difficult to manage House Republicans with the fierce opposition of the Freedom Caucus, and he sparred with them over their willingness to shut down the government in order to accomplish goals such as repealing the Affordable Care Act.[12]

Initially, Kevin McCarthy, the House Majority Leader, was the lead contender, but the Freedom Caucus withheld its support.[15] However, McCarthy withdrew from the race on September 28, 2015.[16] On the same day as McCarthy's withdrawal, Reid Ribble resigned from the Freedom Caucus saying he had joined to promote certain policies and could not support the role that it was playing in the leadership race.[17]

On October 20, 2015, Paul Ryan announced that his bid for the Speaker of the United States House of Representatives was contingent on an official endorsement by the Freedom Caucus.[18] While the group could not reach the 80% approval that was needed to give an official endorsement, on October 21, 2015, it announced that it had reached a supermajority support for Ryan.[19] On October 29, 2015, Ryan succeeded John Boehner as the Speaker of the House.[20]

On November 17, 2015, Jim Jordan was re-elected as Chairman of the caucus.

The group has faced backlash from the Republican Party establishment during the 2016 election cycle.[21] One of its members, Congressman Tim Huelskamp, a Tea Party Republican representing Kansas's First District, was defeated during a primary election on August 2, 2016, by Roger Marshall. 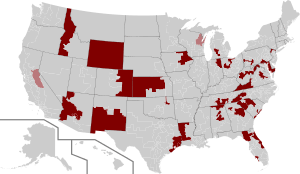 Members of the House Freedom Caucus as of June 2016 include: