McClintock was born in White Plains, New York to a wealthy family and graduated in 1978 from UCLA. He was elected Chairman of the Ventura County Republican Party at age 23, and served until 1981. He was chief of staff to State Senator Ed Davis from 1980–82. From 1992–94, he served as the director of the Center for the California Taxpayer.[1] He was director of the Claremont Institute's Golden State Center for Policy Studies from 1995–96.[2]

After running for Congress in 1992 and for controller in 1994, he decided to run for the Assembly again in 1996. He ran for California's 38th State Assembly district and defeated Democrat Jon Lauritzen 56%–40% to win his sixth assembly term.[8] In 1998, McClintock won re-election to a seventh term unopposed.[9]

He authored California’s lethal injection use for California's death penalty law. He also opposed tax increases and supported spending cuts. He was a strong proponent of abolishing the car tax.[10][11] 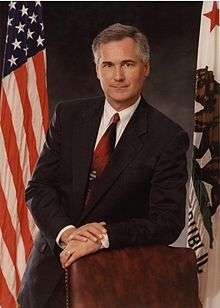 McClintock has a long history of opposing various tax increases. During the 2000 dot-com bubble, he was instrumental in proposing a two-thirds reduction in the vehicle license fee, or car tax. In 2003, he opposed then-Governor Gray Davis's attempt to rescind a rollback of a vehicle license fee.[14] McClintock has also opposed deficit reduction efforts that would have increased taxes. He supported the Bureaucracy Reduction and Closure Commission and performance-based budgeting.[15]

He ran for California State Controller after incumbent Democrat Gray Davis retired. He won the Republican primary, defeating John Morris, 61%–39%.[16] In the general election, he faced Kathleen Connell, former Special Assistant to Los Angeles Mayor Tom Bradley and Director of L.A. Housing Authority. Despite the fact that Connell outspent McClintock by a 3-to-1 margin, he only lost by two percentage points, 48%–46%, with three other candidates receiving the other 6% of the vote.[17]

McClintock ran for State Controller again in 2002, facing Democratic nominee Steve Westly, an eBay executive. Westly outspent him 5-to-1. McClintock's campaigns focused on increasing accountability for the state budget. The ads featured the character Angus McClintock, a fictional cousin and fellow Scottish American extolling Tom McClintock's virtues of thriftiness and accountability with low-budget fifteen-second ads. He lost by a margin of just 0.2%, or 16,811 votes behind Westley, who won with a plurality of 45.3% of the vote. McClintock obtained 45.1% of the vote, while three other candidates obtained a combined 9.5% of the vote.[18]

He ran for Lieutenant Governor in the 2006 elections. He defeated Tony Farmer in the Republican primary, 94%–6%.[21] In the general election, he lost to Democratic State Insurance Commissioner John Garamendi 49%–45%.[22]

On March 4, 2008, McClintock announced his candidacy for the U.S. House of Representatives in California's 4th congressional district, which is hundreds of miles away from the district McClintock represented in the state Senate. The district's nine-term incumbent, fellow Republican John Doolittle, decided to retire. McClintock was unable to vote for himself in either the primary or the general election because the California Constitution required him to maintain his legal residence in his State Senate district until the end of his Senate term. Furthermore, in order to vote using a ballot in regards to a specific congressional district, one must live within that district. Because Thousand Oaks is outside of California's Fourth Congressional District, McClintock was thus ineligible to vote for himself.[25]

Upon McClintock's entry into the race, fellow Republicans Rico Oller and Eric Egland withdrew from the Republican primary and endorsed McClintock.[25][26] McClintock was endorsed by the Republican Liberty Caucus,[27] Club for Growth, and U.S. Congressman Ron Paul. McClintock faced former U.S. Congressman Doug Ose, a moderate represented the neighboring 3rd District from 1999 to 2005. Ose lived outside the district and was painted as a carpetbagger and a liberal who had voted to raise taxes and who voted for earmarks. McClintock defeated Ose 54%–39%.[28]

The Democratic nominee was retired Air Force Lt. Col. Charlie Brown, who ran an unexpectedly strong race against Doolittle in 2006. In March 2008, Ose's campaign commercials criticized McClintock for receiving payments totaling over $300,000 in per diem living expenses during his time in the California State Senate, despite the fact that he lived in Elk Grove, near Sacramento, for most of the year. McClintock maintained that the payments were justified because his legal residence was in Thousand Oaks, in his State Senate district. He stated, "Every legislator's [Sacramento area] residence is close to the Capitol. My residential costs up here are much greater than the average legislator because my family is here."[29] However, Ose's campaign commercials argued McClintock does not own or rent in home in the 19th district, but uses his mother's address. These attacks prompted a response from McClintock's wife, Lori, who said McClintock stays with his mother in order to better care for her after she fell ill and after the death of her husband.[30] McClintock ran ads attacking Brown’s participation at a 2005 protest by Code Pink, an infamous anti-war group, and argued Brown supported gay marriage but not the troops in Iraq. He also portrayed Brown as a clone of Speaker Nancy Pelosi.[11]

McClintock was challenged in the Republican primary again, this time by Michael Babich. He easily defeated Babich 78%–22%.[33] On November 2, he easily won re-election to a second term, defeating businessman Clint Curtis 61%–31%, winning all of the counties in the district.[34]

After redistricting, he decided to run in the newly redrawn 4th, which was moved significantly down the state. Only three counties remained from his prior district: Nevada, Placer, and El Dorado. Despite this, he easily won re-election to a third term, defeating Democrat Jack Uppal 61%–39%. He won all but two of the district's ten counties: Nevada (37%) and Alpine (41%).[35]

During the 112th Congress McClintock was one of 40 "staunch" members of the Republican Study Committee who frequently voted against Republican party leadership and vocally expressed displeasure with House bills.[37] In 2011, McClintock voted against the National Defense Authorization Act for Fiscal Year 2012 as part of a controversial provision that allows the government and the military to indefinitely detain American citizens and others without trial.[38] McClintock's Chief of Staff, Igor Birman, was a candidate for Congress in California's 7th congressional district in 2014.

In 2009 McClintock signed a pledge sponsored by Americans for Prosperity promising to vote against any global warming legislation that would raise taxes.[39]

McClintock supported the Water Rights Protection Act, a bill that would prevent federal agencies from requiring certain entities to relinquish their water rights to the United States in order to use public lands.[40] The bill was a reaction to the United States Forest Service's decision to pursue a "new regulation to demand that water rights be transferred to the federal government as a condition for obtaining permits needed to operate 121 ski resorts that cross over federal lands."[41] McClintock supported the bill, saying that the Forest Service's regulation "illustrates an increasingly hostile attitude by this agency toward those who make productive use of our vast national forests, in this case by enhancing and attracting the tourism upon which our mountain communities depend."[41]