The Harvard Institute of Politics (IOP) was created to serve as a living memorial to President John F. Kennedy and inspire Harvard University students into careers in politics and public service, much as President Kennedy was inspired during his days as a student at Harvard. The IOP also brings together the academic world with the world of politics and public affairs. All of this activity occurs on a non-partisan basis with the sole aim of promoting public service.

Following President Kennedy's death in 1963, the Kennedy Library Corporation raised more than $20 million for both the construction of the John F. Kennedy Presidential Library and Museum, and for the creation and endowment of an institute at Harvard for the study of politics and public affairs. More than 30 million people from around the world, including school children, contributed to the fund. In 1966, the Kennedy Library Corporation presented Harvard University with an endowment for the creation of the Institute of Politics.

Among the programs offered by the IOP include internships, prominent and diverse Forum speakers, the Harvard Political Review, study groups led by visiting and resident Fellows, annual public opinion surveys focused on America's youth, policy groups, and conferences intended to provide opportunities for interaction with the people who shape politics and public policy. The IOP does not offer formal courses or degree-granting programs; instead, it provides avenues for practical experience and encourages students to examine critically and think creatively about politics and public issues.

In 2003, the IOP launched the National Campaign for Political and Civic Engagement, working collaboratively with other schools and organizations across the country to engage young people. The IOP also conducts research and surveys into the political views of America's young voters. In addition, the Institute offers conferences for new members of Congress and new mayors, and, after each Presidential election since 1972, brings together top campaign officials to analyze the race in the "Campaign for President" series.[1]

The Institute of Politics is housed within Harvard's John F. Kennedy School of Government, and is affiliated with the Kennedy Presidential Library. The three institutions work closely together.

The Institute of Politics' mission is to unite and engage students, particularly undergraduates, with academics, politicians, activists, and policymakers on a non-partisan basis and to stimulate and nurture their interest in public service and leadership. The Institute strives to promote greater understanding and cooperation between the academic world and the world of politics and public affairs.

Students are offered wide-ranging opportunities, including internships, prominent and diverse Forum speakers, study groups led by visiting and resident Fellows, and conferences intended to provide opportunities for interaction with the people who shape politics and public policy. The IOP does not offer formal courses or degree-granting programs; instead, it provides avenues for practical experience and encourages students to examine critically and think creatively about politics and public issues. 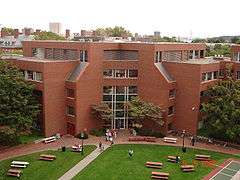 The John F. Kennedy Jr. Forum is one of the world's premier arenas for political speech, discussion and debate. Located at the heart of the John F. Kennedy School of Government, the Forum regularly hosts heads of state; leaders in politics, government, business, labor and the media; academics; community organizers; and artists.[2] In addition to speeches, debates and panel discussions on pressing issues, the Forum has sponsored television and radio programs, film screenings, and theatrical productions.[3]

Since its founding in 1978, the Forum has hosted more than one-thousand events, seen by live audiences totaling more than 650,000 people and millions more via cable television, teleconferencing and the Internet.

The current director of the JFK Jr. Forum is Carrie Devine.

Founded in 2000, the Harvard Public Opinion Project aims to track young voter's (18- to 29-year-olds) attitudes toward politics and public service. Members of HPOP, in conjunction with the Polling Director of the Harvard Institute of Politics, John Della Volpe, conduct the largest national survey of the Millennial generation. These take the form of a tracking poll in the fall and a more comprehensive poll in the spring. After analyzing the data, the committee shares its findings in a nationally covered media release.[6]

The Fellows Program represents a unique opportunity for political practitioners with diverse experiences and viewpoints to spend a semester at Harvard. Fellows interact with students, participate in the intellectual life of the community, and pursue individual studies or projects. The Fellows Program is central to the Institute's dual commitment to encourage student interest in public life and to develop ways for the academic and political communities to learn from each other.

The IOP is also home to and publishes the Harvard Political Review (HPR).[7] The HPR is a quarterly, non-partisan journal of political affairs, written, edited, and managed entirely by Harvard College undergraduates.