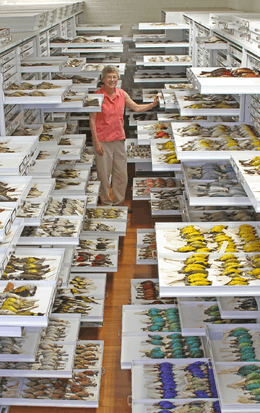 A collection of bird specimens at the Museum of Comparative Zoology

Many of the exhibits in the public museum have not only zoological interest but also historical significance. Past exhibits have included a fossil sand dollar which was found by Charles Darwin in 1834, Captain Cook's mamo, and two pheasants that once belonged to George Washington, now on loan to Mount Vernon in Virginia.

The Harvard Museum of Natural History is physically connected to the Peabody Museum of Archaeology and Ethnology; for visitors, one admission ticket grants access to both museums. The research collections of the Museum of Comparative Zoology are not open to the public.

The Museum of Comparative Zoology was founded in 1859 through the efforts of zoologist Louis Agassiz, and the museum used to be referred to as "The Agassiz" after its founder. Agassiz designed the collection to illustrate the variety and comparative relationships of animal life.

In contrast to numerous more modern museums, the Harvard Museum of Natural History has many hundreds of stuffed animals on display, from the collections of the Museum of Comparative Zoology. Notable exhibits include whale skeletons, the largest turtle shell ever found (eight feet long), "the Harvard mastodon", a 42-foot (13 m) long Kronosaurus skeleton, the skeleton of a dodo, and a coelacanth preserved in fluid. The two-story Great Mammal Hall was renovated in 2009 in celebration of the 150th anniversary of founding of the Museum of Comparative Zoology.