Kirkland House is one of twelve undergraduate residential Houses at Harvard University, located near the Charles River in Cambridge, Massachusetts. It was named after John Thornton Kirkland, president of Harvard University from 1810 to 1828.

Some of the buildings were built in 1914 but construction was not completed until 1933. Kirkland is one of the smallest Houses at Harvard, but has nevertheless managed to win many intramural and house-spirit contests, most recently the 2012 Straus Cup. Before Harvard opted to use a lottery system to assign housing to upperclassmen, Kirkland was considered the "jock house" because its location near Anderson Bridge and the Soldiers Field made it a desirable home and convenient place to dine for Harvard athletes. 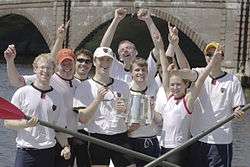 The first Master of Kirkland House was Edward A. Whitney. Walter Eugene Clark succeeded Whitney as the second Master on September 1, 1935.[1] [2] The current Masters of Kirkland House are Tom and Verena Conley, and the Resident Dean is Cory Way.[3]

Kirkland House boasts many traditions, such as its opening ceremony (complete with Minutemen reenactors playing the drums and fife as they process around the House, followed by the house masters, tutors, and students), Secret Santa week (an in-house-only series of gifts, jokes, and events) -- accompanied by bawdy skits in the dining hall, and a winter dance nicknamed "IncestFest" (a debaucherous dance open only to members of the house).

Kirkland House has a gym, lounge, game room, music rooms, and performance and event spaces for students. It also has a wall honoring the history of the Kirkland House Boat Club, which has won Harvard's intramural men's sweeps regatta more often than any other House. Most recently, Christopher D.H. Row, a resident tutor, art history doctoral candidate, and master of divinity student, led the KHBC to five consecutive victories and was awarded the title of "Admiral-for-Life." Among the most recent additions is a brewery, operated and maintained by the Kirkland House Brew Club, which occupies the space once used as the house darkroom.

Kirkland House is located four blocks south of Harvard Yard, adjacent to Eliot House, and across Dunster Street from the Malkin Athletic Center.

The House Seal is a black cross with three silver stars on a red field. 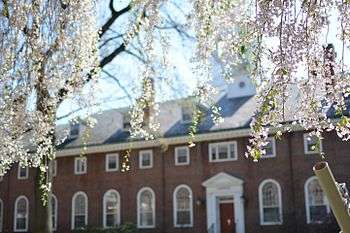 A view facing the Kirkland House dining hall, in May.

Smith Halls, which were constructed in 1914 as freshman dormitories; Bryant Hall and the Masters' Residence, both constructed in 1931; and Hicks House, which dates from 1762 and serves as the House Library. Kirkland students also live in the 20 DeWolfe Street apartments. Located in Smith Halls, the dining hall and Junior Common Room boast magnificent woodwork and high ceilings that highlight Kirkland's classic charm and elegance.