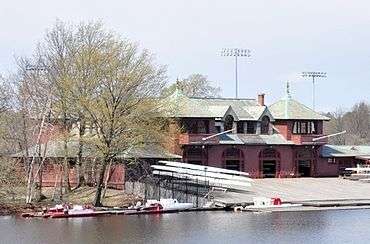 Newell Boathouse, named for a popular Harvard athlete killed just a few years after graduation, is the primary boathouse used by Harvard University's varsity men's rowing teams.[1] It stands on land subject to an unusual[2] peppercorn lease agreement[3] between Harvard and the Commonwealth of Massachusetts.

Called "the elder statesman among Charles River boathouses",[4] Newell Boathouse is named for 1894 Harvard College graduate Marshall Newell, a varsity rower and All-American football player in all four of his undergraduate years, "beloved by all those who knew him" and nicknamed "Ma" for the guidance he gave younger athletes.[5] After Newell was killed in 1897 while working as an official of the Boston and Albany Railroad,[6] $2,000 was raised for a boathouse in his memory.[5]

Built in 1900 on the south side of the Charles to a design by Peabody and Stearns (architect Robert Peabody having been rowing captain as a Harvard undergraduate),[1] Newell Boathouse is constructed of concrete, with a slate facade and roof. It was Harvard's first permanent boathouse,[7] replacing a series of wooden boathouses in the area.[8] In addition to storage for racing shells, the building provides locker rooms, meeting and training rooms, and rowing tanks and other practice equipment.[4] Architectural historian Bainbridge Bunting wrote that its "complex profile ... closely resembling that of Carey Cage reflected in the Charles in the early morning, has made it a landmark on the river."[7]

The "prime riverfront space" upon which Newell Boathouse stands belongs to the Commonwealth of Massachusetts. In addition to having given the Commonwealth forty-six acres of land downriver, Harvard pays $1 per year for the right to maintain a boathouse on the site, under a lease running one thousand years, at the end of which time Harvard has the option to renew the lease for a further thousand years[2]—​​an example of a peppercorn lease amounting to "virtual freehold."[3]