History and traditions of Harvard commencements 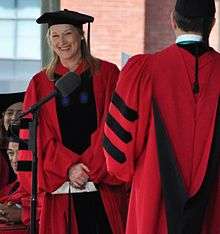 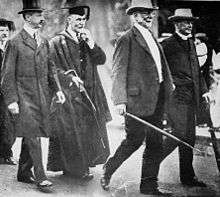 What was originally called Harvard Colledge (around which Harvard University eventually grew) held its first Commence­ment in September 1642, when nine degrees were conferred.[3] Today some 1700 under­grad­uate degrees, and 5000 advanced degrees from the university's various graduate and professional schools, are conferred each Commence­ment Day.

Each degree candidate attends three ceremonies: the Morning Exercises, at which degrees are conferred verbally en masse; a smaller midday ceremony (at the candidate's professional or graduate school, or upperclass House) during which actual diplomas are given in hand; and in the afternoon the annual meeting of the Harvard Alumni Association's, at which Harvard's President and the day's featured speaker deliver their addresses.[4]

Several hundred Harvard honorary degrees (which with few exceptions must be accepted in person) have been awarded since the first was bestowed on Benjamin Franklin in 1753.[5] In 1935 playwright George Bernard Shaw declined nomination for a Harvard honorary degree, suggesting instead that Harvard celebrate its three-hundredth anniversary by "burning itself to the ground ... as an example to all the other famous old corrupters of youth" such as Yale.

The ceremonies shifted from late summer to late June in the nineteenth century,[lower-alpha 1] and are now held at the end of May. A number of unusual traditions have attached to them over the centuries, including the arrival of certain dignitaries on horseback, occupancy by Harvard's president of the Holyoke Chair (a "bizarre" sixteenth-century contraption prone to tipping over) and the welcoming of newly minted bachelors to "the fellowship of educated men and women." 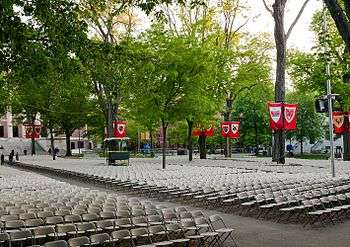 Seating for degree candidates in Tercentenary Theatre. Banners display arms of the various graduate and professional schools, and upperclass houses.

Most upperclass Houses have rituals of their own. At Lowell House, for example, a perambulating bagpiper alerts seniors at 6:15 am for a 6:30 breakfast in the House dining hall with members of the Senior Common Room, after which all process (along with members of Eliot House, who have been similarly roused) to Memorial Church for a chapel service at 7:45.[8][9]

The first to enter are candidates for graduate and professional degrees, followed by alumni and alumnae. Candidates for under­grad­uate degrees enter next, traditionally removing headgear as they pass the John Harvard statue en route.[12][13] Finally comes the Presi­dent's Procession, as follows:[3][14]

At Cambridge. Is kept in the College there.
Seems but little the worse for wear.
That's remarkable when I say
It was old in President Holyoke's day.

On the dais the Presi­dent occupies the Holyoke Chair, an uncom­fort­able[7] and treach­er­ous Jacobean turned chair reserved for such ceremo­nies since at least 1770 (when it was already some two hundred years old). Called "bizarre ... with a complex frame and top-heavy superstructure", its "square framework set on the single rear post makes [it] tip over easily to either side." [22] Said the Harvard Gazette in 2007, "When the chair holds its robed occupant, onlookers cannot detect the odd geometry by which its triangular seat points toward a square back rippling with knobby dowels and finials. Perhaps by striking their own precarious balance in this strange seat of authority, the successors of Edward Holyoke [Harvard's president 1737–69] come to sense what the job is all about." [lower-alpha 6] 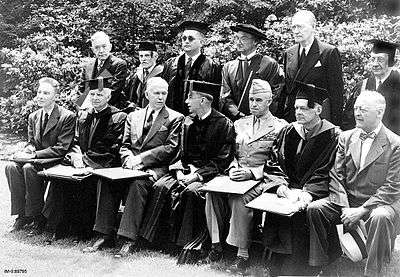 At the University Marshal's call ("Mister Sheriff, pray give us order") the Middlesex Sheriff takes to the dais, strikes it thrice with the butt of his staff, and intones, "The meeting will be in order." [7] Three student speakers (Under­grad­uate English, Under­grad­uate Latin, and Graduate English) are introduced and deliver their addresses.

Then, according to the order in which the various graduate and professional schools were created, the dean of each school steps forward to present, en masse, that school's degree candidates. Each group stands for the President's incantation conferring their degrees, which is followed by a traditional welcome or exhortation: doctoral graduates, for example, are welcomed "to the ancient and universal company of scholars", while law graduates are reminded to "aid in the shaping and application of those wise restraints that make us free." Last to be graduated are the Bachelor's candidates, who are then welcomed to "the fellowship of educated men and women." [3]

Honorary degrees are then bestowed. Finally, all rise to sing "The Harvard Hymn",[24][25] expressing the hope (Integri sint curatores, Eruditi professores, Largiantur donatores—​​printed lyrics are supplied)[26] that the trustees, faculty and benefactors will manifest (respectively) integrity, wisdom, and generosity.[27] After a benediction is said, the Middlesex Sheriff declares the ceremony closed and the Presi­dent's Procession departs.

Once the dais is clear the Harvard Band strikes up and the Memorial Church bell commences to peal,[25] joined by bells throughout Cambridge for most of the following hour.[lower-alpha 7] 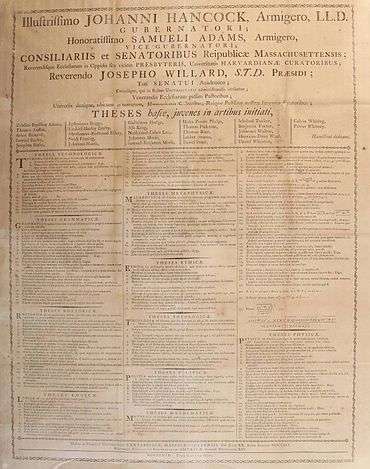 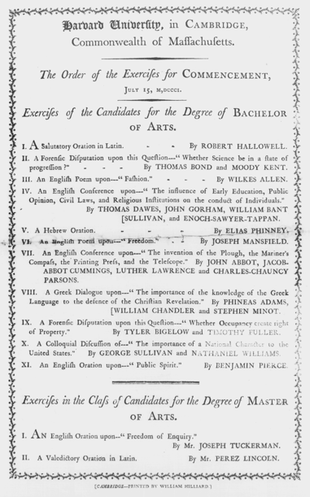 Order of the Exercises (July 15, 1801) opening with "A Saluta­tory Oration in Latin" 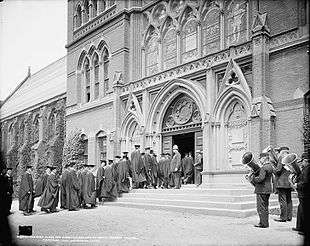 After the Morning Exercises, each graduate or professional school, and each upperclass House, holds a smaller ceremony (with luncheon) at which its member-graduates are called forward by name to receive their diplomas in hand.

At the afternoon meeting of the Harvard Alumni Association, the Presi­dent and the Commence­ment Day speaker deliver their addresses.

US Secretary of State (and former Army general) George C. Marshall's 1947 address as Commence­ment Day Speaker famously outlined a plan (soon known as the Marshall Plan, and for which he would later be awarded the Nobel Peace Prize) for the economic revival of post-World War II Europe.[28] 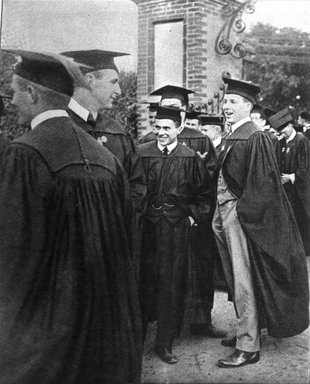 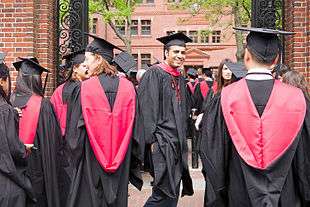 "Our fathers ... closely associated the thirst for learning and that for beer", a 1924 Harvard history observed,[29] so that (a modern survey continued) the sheriffs' presence at Commencements "has a practical origin. Feasting, drinking, and merry­making at earlier commence­ments often got out of hand. Fights were not unheard of", and commencements in various years have featured two-headed calves, an elephant, and Indians-versus-scholars archery competitions.[7] Such goings-on were sufficiently common knowledge that in 1749, Bostonian William Douglass explained to a general readership that the siege and capture of Louisbourg had been "carried on in a tumultuary random Manner, and resembled a Cambridge Commence­ment." [29]

For the preservation of Disorders on Commence­ment day, [the Corporation] voted that the Honble Henry Gardner Esq: and the Honble Abraham Fuller Esq: Justices of the Peace thro' the State, and Loammi Baldwin Esq: Sheriff of the County of Middlesex, be requested to give their attendance on that day ...[17]

Earlier measures had included the 1693 banning of plum cake—​​the enjoyment of which, officials asserted, was unknown at other universities, "dishonourable to ye Colledge, not gratefull to Wise men, and chargable to [i.e. the fault of] ye Parents". This was one of many efforts by Increase Mather (Harvard's president from 1692 to 1701) toward "Reformation of those excesses ... [of] Commence­ment day and weeke at the Colledge, [sic] so that I might [prevent] disorder and profaneness" [3]—​​for Harvard officials a recurring headache.[lower-alpha 8]

To curb unseemly sartorial displays of wealth and social status the 1807 Laws of Harvard College provided that, on Commence­ment day,

[E]very Candidate for a first degree shall be clothed in a black gown, or in a coat of blue grey, a dark blue, or a black color; and no one shall wear any silk nightgown, on said day, nor any gold or silver lace, cord, or edging upon his hat, waistcoat, or any other part of his clothing, in the College, or town of Cambridge.[27]

Responding to the prospect of being nominated for an honorary degree on the occasion of Harvard's Tercentenary in 1936, George Bernard Shaw wrote:

Dear Sir, I have to thank you for your proposal to present me as a candidate for an honorary degree of D.L. of Harvard University at its tri-centenary celebration. But I cannot pretend that it would be fair for me to accept university degrees when every public reference of mine to our educational system, and especially to the influence of the universities on it, is fiercely hostile. If Harvard would celebrate its three hundredth anniversary by burning itself to the ground and sowing its site with salt, the ceremony would give me the greatest satisfaction as an example to all the other famous old corrupters of youth, including Yale, Oxford, Cambridge, the Sorbonne, etc. Under these circumstances I should let you down very heavily if you undertook to sponsor me.

A handwritten postscript read: "I appreciate the friendliness of your attitude." [30]