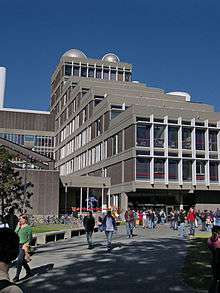 The Harvard University Science Center is Harvard's main classroom and laboratory building for undergraduate science and mathematics, in addition to housing numerous other facilities and services. Located just north of Harvard Yard, the Science Center was built in 1972[1] and opened in 1973[2][3] after a design by Josep Lluís Sert (then dean of the Harvard Graduate School of Design).[4]

Harvard had been interested in building an undergraduate science center in the 1950s and 1960s. However, in the midst of an economic decline, funding could not be found. No concrete plans were made until in 1968, Edwin Land, inventor of the Polaroid "Land" camera, made a $12.5 million donation to construct a science center specifically for undergraduates.[5][6]

Opponents of the plan feared that insufficient monies would be found to complete the project, and that the building's maintenance costs would be unreasonably high.[6] The Biology Department also protested the move of its undergraduate-instruction facilities far from the department's main quarters. Professor George Wald argued that this would degrade the quality of instruction. There was also dissatisfaction with cancellation of plans at that time for a new biochemistry building.[7]

The plan called for demolition of Lawrence Hall, a laboratory and a living space built in 1848. By the time of the scheduled demolition it had been occupied as the site of "Free University". The controversy was rendered moot when fire gutted the building in 1970.[8][9]

As part of the project, in 1966–68 the portion of Cambridge Street running along the north edge of Harvard Yard was depressed into a 4-lane motor vehicle underpass, thus allowing unhindered pedestrian movement between the Yard and Harvard facilities to the north, including the new Science Center. Architectural historian Bainbridge Bunting wrote that this was the "most important improvement in Cambridge since the construction of [what would later be called] Memorial Drive in the 1890s".[1] The large plaza that was created between the Science Center and the northern wall of Harvard Yard is used at various times for food trucks, roller skating, ice skating, and tents housing temporary events. Near the main entrance to the Science Center is an installation of large boulders and landscaping which operates as an outdoors fountain during good weather.

Harvard commissioned architects Sert, Jackson and Associates to design and build the facility. Sert, who had become Dean of the Harvard School of Design in 1953, had designed a number of other Harvard buildings, including Peabody Terrace, Holyoke Center (now the Smith Campus Center), and the Harvard Divinity School's Center for the Study of World Religions. These buildings were part of a modernist movement that sought to break away from the Georgian and related styles used at Harvard for hundreds of years. Thus, the Science Center is largely steel and concrete, with plentiful fenestration admitting natural light.[4][7] Construction lasted from 1970 to 1972.[7]

From 2001 to 2004 a $22 million, 32,000-square-foot (3,000 m2) renovation created space for the Collection of Historical Scientific Instruments and expanded other facilities.[5][10][11] A room-sized historic electromechanical computer built in 1944, the Harvard Mark I, is displayed on the ground floor next to the central stairwell in the main lobby of the building.

The Science Center comprises nine stories, plus a basement and observatory floor. It houses the History of Science, Mathematics, and Statistics Departments. Other facilities include:[12]

Secreted beneath the Science Center itself and its courtyard (and largely unknown those who work and study at Harvard) is a "gargantuan" chilled water plant, "a magnificent Piranesi-like interior with the volume of Boston's Symphony Hall"[1] providing cooling to much of Harvard from the Science Center northward.[16]