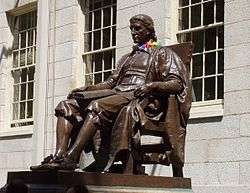 University Hall is a white granite building designed by the great early American architect Charles Bulfinch and built by the noted early engineer Loammi Baldwin, Jr. It is located in Harvard Yard on the campus of Harvard University in Cambridge, Massachusetts. It was designated a National Historic Landmark in 1970 for its architectural significance.[2]

The hall was designed by Bulfinch, class of 1781, and built between 1813-15 of white Chelmsford granite, probably using rock cut to size at the Charlestown Prison. It consists of a partial basement story, plus three full stories raised above ground as well as an additional story set within the roofline. The long east and west facades are very similar, and symmetrically arranged with two entrances per facade, each flanked by pilasters; smaller north and south facades present rows of windows. Total construction cost was $65,000 of which $53,000 was paid by the Commonwealth of Massachusetts. 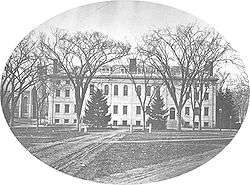 University Hall's first floor contained the College Commons (dining room) until 1849. The building also contained a library and philosophical (scientific) apparatus, as well as a chapel within the second and third floors. A massive portico with stone pillars was added to the western facade soon after completion, but removed in 1842. In 1849 the first floor was partitioned into classrooms; in 1867 the chapel was partitioned as well. In 1896 the chapel was restored and used for meetings of the Faculty of Arts and Sciences. In 1924 Daniel Chester French's bronze statue of John Harvard was moved to the western façade from its original location near Memorial Hall.

In 1969, Harvard students took over the hall and occupied it for 18 hours in protest of Harvard's stance on the Vietnam War. The demonstration ended only when Massachusetts state police arrived to remove the students from the building.[3]