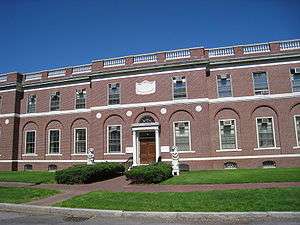 The Harvard–Yenching Library is the primary location for East Asia-related collections at the Harvard University Library. In addition to Chinese, Japanese, and Western languages, it houses collections in Korean, Vietnamese, Tibetan, Manchu, and Mongolian, totaling more than 1 million volumes.[1] The library is located at 2 Divinity Avenue on the Cambridge campus of Harvard University.

In 1879, Ko K'un-hua, a scholar from China, was engaged to give a course in the Chinese language. The small collection of books that was bought for this course became Harvard College's first acquisitions in any East Asian language. In 1914, two Japanese professors came from Tokyo Imperial University to lecture at Harvard; and they donated several important sets of Japanese publications on Sinology and Buddhism to the Harvard College Library, thus launching Harvard's Japanese collection. These two collections became the nucleus of Harvard's East Asian library. In 1927, Archibald Cary Coolidge, head of Harvard's libraries, asked Alfred Kaiming Chiu, then a graduate student at Harvard, to organize and catalog these collections.[2] The library was formally founded in 1928 as the Chinese-Japanese Library of the Harvard-Yenching Institute, the library took its present name in 1965 to reflect the expansion of its collections beyond Chinese and Japanese. In 1976, management of the library shifted from the independent Harvard-Yenching Institute to the Harvard College Library.[3]

The 75th Anniversary of the Library was celebrated in 2003 with a symposium and the publication of a volume of scholarly articles on the history of the library and its collections. [5] In 2009, the library announced a six-year, multimillion-dollar project to digitize major sections of its rare books collection in cooperation with the National Library of China. [6]