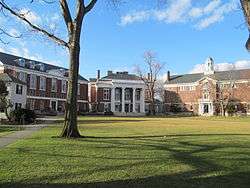 The Radcliffe Institute for Advanced Study at Harvard, located in Cambridge, Massachusetts, and now a division of Harvard University, carries on many of the research and professional development programs that Radcliffe College pioneered and has introduced other programs to the worldwide community of scholars. It is one of the nine member institutions of the Some Institutes for Advanced Study consortium.

The Radcliffe Institute offers a calendar of events to share emerging and engaging ideas in all disciplines with the public - for attendees in Cambridge and thousands who watch the video coverage of the lectures, conferences, and performances.

Lizabeth Cohen, the Howard Mumford Jones Professor of American Studies in the Harvard Faculty of Arts and Sciences, is the dean of the Radcliffe Institute for Advanced Study.

The current Institute came into being by the agreement of October 1, 1999, under which Radcliffe College merged formally into Harvard University.[3] However, long before this date the focus of Radcliffe had already begun to shift, as undergraduate women had for a half-century taken their classes at Harvard, and for a quarter-century lived integrated in dormitories with Harvard men.

During the period of transition from College to Institute, Mary Maples Dunn served as interim dean. On January 1, 2001, Drew Gilpin Faust became the Institute's first permanent dean; she stepped down in July 2007 to become President of Harvard University. Barbara J. Grosz, Higgins Professor of Natural Sciences at the Harvard School of Engineering and Applied Sciences, served as interim dean starting in July 2007 and was named dean of the institute on April 28, 2008. She stepped down from that post in June 2011.

The Arthur and Elizabeth Schlesinger Library on the History of Women in America exists to document women's lives and endeavors. Its wealth of resources reveals the wide range of women's activities at home in the United States and abroad from the early 19th century to the present day. The library’s holdings include manuscripts; books and periodicals; and photographic and audiovisual material.

There are more than 2,500 unique manuscript collections from individuals, families, and organizations. Women's rights movements past and present, feminism, health and sexuality, social reform, and the education of women and girls are manuscript holdings. Ordinary lives of women and families and the struggles and triumphs of women of accomplishment are richly documented in diaries and other personal records. Many collections, such as the papers of Charlotte Perkins Gilman, Pauli Murray, and the records of the National Organization for Women, feature political, organizational, and economic questions. In addition to these collections, the library also houses the works of Susan B. Anthony, Amelia Earhart, Betty Friedan, Adrienne Rich, and many others.

Books and Periodicals: More than 80,000 printed volumes include scholarly monographs as well as popular works. These cover topics including women’s rights; women and work; women’s health; women of color; comparative material about women in other cultures; works on women in the arts and in music; women and family; feminist and anti-feminist theory; and lesbian writings. Hundreds of periodical titles, including popular magazines such as Ladies' Home Journal, Ebony, and Seventeen, highlight domestic concerns, leisure pursuits, etiquette, fashion, and food.

Photographic and Audiovisual Material: More than 90,000 photographs, ranging from casual snapshots to the works of professional photographers, create an unparalleled visual record of private and public life. Audiotapes, videotapes and oral history tapes, and transcripts add the soundtrack to the story of women’s lives.

The library has two distinguished special collections. A culinary collection of over 15,000 books—spanning five centuries and global cuisines—is one of the world's most significant. This collection also includes the papers of several famous chefs and foodwriters such as M. F. K. Fisher, Julia Child, and Elizabeth David. The archives of Radcliffe College, 1879-1999—including papers of college officers, students, and alumnae—richly record the history of women in higher education.

While its focus for collecting is American women, the library has an abundance of print and manuscript materials bearing on issues around the globe as a result of American women's extensive travel and foreign residence. Some examples are letters of early missionaries in China, activists' accounts of the Women's Encampment for a Future of Peace and Justice, and the speeches and writings of Shirley Graham Du Bois.

Detailed records for the library’s manuscript collections as well as books and periodicals can be found in HOLLIS. The catalog record gives a description of the item or collection and provides other important information such as offsite location or access restrictions.

Radcliffe Institute fellowships are designed to support scholars, scientists, artists, and writers of exceptional promise and demonstrated accomplishments who wish to pursue work in academic and professional fields and in the creative arts.

The Radcliffe Institute Fellowship Program was founded at Radcliffe College in 1960 as the Radcliffe Institute for Independent Study. In 1978 the Institute was renamed the Mary Ingraham Bunting Institute to honor Radcliffe College President Mary Bunting whose initiative it was to create a postgraduate study center for female scholars and artists. Concerned about the prevailing "climate of unexpectation" for women at that time, Bunting deliberately sought to reverse that negative attitude by establishing the essential gifts of an Institute fellowship: time, financial support, a room of one's own, membership in a vital community of women, and access to all Radcliffe and Harvard resources.

Once Bunting’s idea was made public and the announcement appeared on the front page of the New York Times in the fall of 1960, more than 2,000 women inquired about the "experiment." The outpouring of interest confirmed President Bunting's hunch—that a growing number of educated women were ready to resume intellectual or artistic work after raising families.

Since 1960, more than 1,300 scholars, scientists, artists, writers, and musicians have been named fellows. The Boston Globe Magazine called the Bunting Institute "America's Think Tank for Women," and the Chronicle of Higher Education described the Institute as a place where "lives get turned around, books get written, and discoveries are made, all the result of time spent among intellectual peers."

In addition, research clusters at the Radcliffe Institute for Advanced Study use the Radcliffe Fellowship Program to draw together scholars to focus on particular themes. Previous cluster topics include unconscious prejudice and the law, immigration, randomness and computation, and cosmology and theoretical astrophysics.

In addition to the Schlesinger Library and the Fellowship Program, Radcliffe's newest program, Academic Ventures (formerly known as Academic Engagement Programs) was created in 2009. It serves as an internal link for Harvard faculty, graduate and undergraduate students, and fellows, creating more opportunities for intellectual sharing, exploring, and collaboration. In addition, the general public is invited to attend select events.