In the New Testament

The son of Zebedee and Salome, James is styled "the Greater thunder" to distinguish him from the Apostle James "the Less". He was the brother of John, the beloved disciple, and probably the elder of the two.[1]

His parents seem to have been people of means. Zebedee, his father, was a fisherman of the Sea of Galilee, who probably lived in or near Bethsaida, present Galilee, Israel, perhaps in Capernaum, and had some boatmen or hired men. Salome, his mother, was one of the pious women who afterwards followed Christ and "ministered unto him of their substance", and his brother John was personally known to the high-priest, and must have had wherewithal to provide for the Mother of Jesus.[1]

It is probable that his brother had not received the technical training of the rabbinical schools; in this sense they were unlearned and without any official position among the Jews. But, according to the social rank of their parents, they must have been men of ordinary education, in the common walks of Jewish life. James is described as one of the first disciples to join Jesus. The Synoptic Gospels state that James and John were with their father by the seashore when Jesus called them to follow him.[Matt. 4:21-22][Mk. 1:19-20] James was one of only three apostles whom Jesus selected to bear witness to his Transfiguration.[2] James and John[3] (or, in another tradition, their mother[4]) asked Jesus to grant them seats on his right and left in his glory. Jesus rebuked them, and the other ten apostles were annoyed with them. James and his brother wanted to call down fire on a Samaritan town, but were rebuked by Jesus.[Lk 9:51-6] The Acts of the Apostles records that "Herod the king" (traditionally identified with Herod Agrippa) had James executed by sword. He is the only apostle whose martyrdom is recorded in the New Testament. He is, thus, traditionally believed to be the first of the twelve apostles martyred for his faith.[Acts 12:1-2] Nixon suggests that this may have been caused by James' fiery temper,[5] for which he and his brother earned the nickname Boanerges or "Sons of Thunder".[Mark 3:17] F. F. Bruce contrasts this story to that of the Liberation of Saint Peter, and notes that "James should die while Peter should escape" is a "mystery of divine providence".[6]

The New Testament scholar Dennis MacDonald identifies Castor and Pollux as basis characters for the appearance of James and John in the narrative by Mark the Evangelist.[7] Macdonald cites the origin of this identification to 1913 when J. Rendel Harris published his work Boanerges,[8] a Greek term for Thunder, the epithet of Zeus father of Pollux in what MacDonald calls a form of early Christian Dioscurism.

The English name "James" comes from Italian "Giacomo", a variant of "Giacobo" derived from Iacobus (Jacob) in Latin, itself from the Greek Ἰάκωβος "Iacobos". In French, Jacob is translated "Jacques". In eastern Spain, Jacobus became "Jacome" or "Jaime"; in Catalonia, it became "Jaume", in western Iberia it became "Iago", from Hebrew יַעֲקֹב, which when prefixed with "Sant" became "Santiago" in Portugal and Galicia; "Tiago" is also spelled "Diego" in Spanish and "Diogo" in Portuguese, which is also the Spanish name of Saint Didacus of Alcalá. Alternatively, Santiago is the local Galician evolution of Vulgar Latin Sanctu Iacobu, "Saint James".[9] 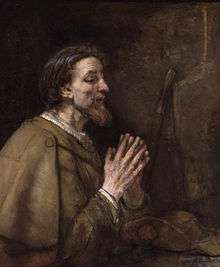 Saint James the Elder by RembrandtHe is depicted clothed as a pilgrim; note the scallop shell on his shoulder and his staff and pilgrim's hat beside him.

Saint James is the patron saint of Spain and, according to legend, his remains are held in Santiago de Compostela in Galicia. (The name Santiago is the local Galician evolution of Vulgar Latin Sanctu Iacobu, "Saint James".) The traditional pilgrimage to the grave of the saint, known as the "Way of St. James", has been the most popular pilgrimage for Western European Catholics from the Early Middle Ages onwards, although its modern revival and popularity stems from Walter Starkie's 1957 book, The Road to Santiago. The Pilgrims of St. James.[9] Some 237,886 pilgrims registered in 2014 as having completed the final 100 km walk (200 km by bicycle) to Santiago to qualify for a Compostela.[10] When 25 July falls on a Sunday, it is a ″Jubilee″ year (an Año Santo Jubilar Compostelano or Año Santo Jacobeo) and a special east door is opened for entrance into Santiago Cathedral. Jubilee years fall every 5, 6, and 11 years. In the 2004 Jubilee year, 179,944[11] pilgrims received a Compostela. In 2010 the number had risen to 275,135.[12]

The feast day of St. James is celebrated on 25 July on the liturgical calendars of the Roman Catholic, Anglican, Lutheran and certain Protestant churches. He is commemorated on 30 April in the Orthodox Christian liturgical calendar (for those churches which follow the traditional Julian Calendar, 30 April currently falls on 13 May of the modern Gregorian Calendar).

The site of martyrdom is located within the Armenian Apostolic Cathedral of St. James in the Armenian Quarter of Jerusalem. The Chapel of St. James the Great, located to the left of the sanctuary, is the traditional place where he was martyred when King Agrippas ordered him to be beheaded (Acts 12:1-2). His head is buried under the altar, marked by a piece of red marble and surrounded by six votive lamps.[13]

Mission in Iberia and burial at Compostela

The 12th-century Historia Compostelana commissioned by bishop Diego Gelmírez provides a summary of the legend of St. James as it was believed at Compostela. Two propositions are central to it: first, that St. James preached the gospel in Iberia as well as in the Holy Land; second, that after his martyrdom at the hands of Herod Agrippa his disciples carried his body by sea to Iberia, where they landed at Padrón on the coast of Galicia, and took it inland for burial at Santiago de Compostela.

The translation of his relics from Judea to Galicia in the northwest of Iberia was effected, in legend, by a series of miraculous happenings: decapitated in Jerusalem with a sword by Herod Agrippa himself, his body was taken up by angels, and sailed in a rudderless, unattended boat to Iria Flavia in Iberia, where a massive rock closed around his relics, which were later removed to Compostela.

According to ancient local tradition, on 2 January AD 40, the Virgin Mary appeared to James on the bank of the Ebro River at Caesaraugusta, while he was preaching the Gospel in Iberia. She appeared upon a pillar, Nuestra Señora del Pilar, and that pillar is conserved and venerated within the present Basilica of Our Lady of the Pillar, in Zaragoza, Spain. Following that apparition, St. James returned to Judea, where he was beheaded by King Herod Agrippa I in the year 44.[14][15]

The tradition at Compostela placed the discovery of the relics of the saint in the time of king Alfonso II (791-842) and of bishop Theodemir of Iria. These traditions were the basis for the pilgrimage route that began to be established in the 9th century, and the shrine dedicated to James at Santiago de Compostela, in Galicia in Spain, became the most famous pilgrimage site in the Christian world. The Way of St. James is a tree of routes that cross Western Europe and arrive at Santiago through Northern Spain. Eventually James became the patron saint of Spain.

James suffered martyrdom[Acts 12:1-2] in AD 44. According to the tradition of the early Church, he had not yet left Jerusalem at this time.[16] An argument supporting this assertion is based on St Paul's Epistle to the Romans, written after AD 44, in which he expressed his intention to avoid "building on someone else's foundation",[Rom. 15:20] by visiting Spain[Rom. 15:23-24], suggesting that he knew of no previous evangelisation in Hispania.

The tradition was not unanimously admitted afterwards, while numerous modern scholars, following Louis Duchesne and T. E. Kendrick,[17] reject it. (According to Kendrick, even if one admits the existence of miracles, James' presence in Spain is impossible.) The Bollandists however defended it (their Acta Sanctorum, July, VI and VII, gives further sources). The suggestion began to be made from the 9th century that, as well as evangelizing in Iberia, his body may have been brought to Compostela. No earlier tradition places the burial of St. James in Hispania. A rival tradition places the relics of the apostle in the church of St. Saturnin at Toulouse; if any physical relics were ever involved, they might plausibly have been divided between the two.

The Catholic Encyclopedia (1908) registered several "difficulties" or bases for doubts of this tradition, beyond the late appearance of the legend:

Although the tradition that James founded an apostolic see in Iberia was current in the year 700, no certain mention of such tradition is to be found in the genuine writings of early writers nor in the early councils; the first certain mention we find in the ninth century, in Notker, a monk of St. Gall (Martyrologia, 25 July), Walafrid Strabo (Poema de XII Apostoli), and others.

The authenticity of the relics at Compostela was asserted in the Bull of Pope Leo XIII, Omnipotens Deus, of 1 November 1884. 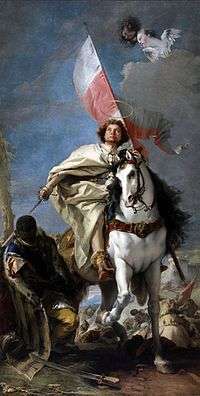 Saint James as the Moor-killer by Giovanni Battista Tiepolo (Museum of Fine Arts, Budapest). His mantle is that of his military order.

An even later tradition states that he miraculously appeared to fight for the Christian army during the legendary battle of Clavijo, and was henceforth called Santiago Matamoros (Saint James the Moor-slayer). ¡Santiago, y cierra, España! ("St. James and strike for Spain") was the traditional battle cry of medieval Spanish (Christian) armies. Cervantes has Don Quixote explaining that "the great knight of the russet cross was given by God to Spain as patron and protector".[18]

A similar miracle is related about San Millán. The possibility that a cult of James was instituted to supplant the Galician cult of Priscillian (executed in 385) who was widely venerated across the north of Iberia as a martyr at the hands of the bishops rather than as a heretic should not be overlooked. This was cautiously raised by Henry Chadwick in his book on Priscillian;[14] it is not the traditional Roman Catholic view. The Catholic Encyclopedia of 1908, however, is quite cautious about the origins of the cult (see above at "Controversy"). 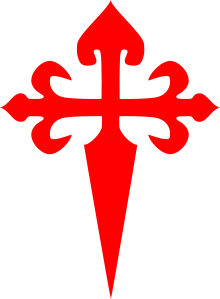 The Cross of Saint James, the symbol of the Order of Santiago; the hilt is surmounted with a scallop.

The military Order of Santiago, named after James, was founded in Spain in the 12th century to fight the Moors. Later, as in other orders of chivalry, the membership became a mark of honor.

James had a special place in the Central African Kingdom of Kongo because of his association with the founding of Christianity in the country in the late 15th century. Portuguese sailors and diplomats brought the saint to Kongo when they first reached the country in 1483. When King Afonso I of Kongo whose Kongo name was Mvemba a Nzinga, the second Christian king, was facing a rival, his brother Mpanzu a Kitima, in battle, he reported that a vision of Saint James and the Heavenly Host appeared in the sky, frightened Mpanzu a Kitima's soldiers, and gave Afonso the victory. As a result, he declared that Saint James' feast day (25 July) be celebrated as a national holiday.

Over the years, Saint James day became the central holiday of Kongo. Taxes were collected on that day, and men eligible for military duty were required to appear armed. There were usually regional celebrations as well as one at the capital. In some cases, Kongolese slaves carried the celebration to the New World, and there are still celebrations of Saint James Day in Haiti and Puerto Rico.

The Church of Jesus Christ of Latter-day Saints (LDS Church) teaches that James has been resurrected and that in 1829 he—along with the resurrected Peter and the translated John—visited Joseph Smith and Oliver Cowdery and restored the priesthood authority with apostolic succession to earth.[19]