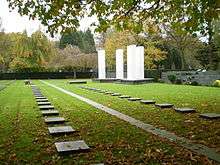 Memorial to the victims of the Innovation Department Store Fire in Evere, Belgium

The L'Innovation fire was a fire which took place at the À L'Innovation department store on the Rue Neuve in Brussels, Belgium on 22 May 1967. 323 people were killed, 150 injured and the department store itself, the work of the architect Victor Horta, was destroyed. In the aftermath of the fire, there was speculation that it might have been started by anti-American, Maoist protestors in the context of the Cold War and opposition to United States involvement in the Vietnam War.

The Innovation fire was a major tragedy and remains the most deadly fire in Belgian history.

The Innovation department store was situated on the fashionable Rue Neuve in Brussels. It was housed in a purpose-built edifice constructed by the leading Art Nouveau architect Victor Horta in 1901. The store had five floors and, in 1967, had daily takings of 30 million Belgian francs (roughly 4,300,000 euros of 2015). 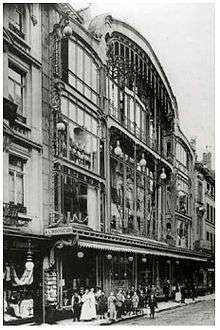 The Innovation store, pictured soon after its construction in 1901.

An exhibit featuring American merchandise that began on 5 May and included blue jeans, barbecue equipment and paper dolls had created outrage among a pro-China group called "Action for the Peace and Independence of Peoples." In the days leading up to the fire, picketing outside the store had taken place, while pamphlets promising greater conflict also circulated.

The blaze began in the five-story structure at approximately 13:30 when more than 1,000 people were in the store. The store was built with an atrium in the center open to all floors and topped with a skylight, an architecture that behaved like a chimney giving a steady air draft to the store's wooden floors and walls. Cries of "fire!" caused panic, with virtually the entire store engulfed in just 10 minutes. No sprinkler system or other active fire fighting system was present. Many shoppers rushed to windows, since the main stairway was enveloped in thick black smoke, while some jumped to their deaths before fire ladders arrived. Still others went to the roof and escaped via nearby buildings. Some employees, having become used to the exploding fireworks that protestors had set off, ignored pleas to leave the building until it was too late.

The origin of the fire was a source of confusion, with store management first stating that the inferno began in the first-floor children's wear department. That was a contradiction of witnesses who had seen exploding butane canisters in the third floor camping department, as well as fourth floor problems in the kitchen of the store's restaurant. Further controversy came about when one witness claimed to have heard one person shout after the fire began, "I'm giving my life for Vietnam!"

On May 30, a funeral service for the victims, attended by Belgium's King Baudouin I and Queen Fabiola, was held at the Basilica of the Sacred Heart. Other towns also held funeral masses. The fire marked the worst catastrophe worldwide since the 1961 Niteroi circus fire in Brazil, and was Belgium's greatest disaster since the August 1956 coal mine tragedy at the Bois du Cazier colliery in Marcinelle.