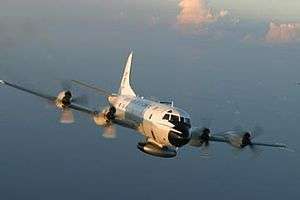 The National Oceanic and Atmospheric Administration Office of Marine and Aviation Operations (OMAO) operates a wide variety of specialized aircraft and ships to complete NOAA's environmental and scientific missions. OMAO also manages the NOAA Small Boat Program and the NOAA Diving Program, the latter having as part of its mission the job of ensuring a level of diving skill conducive to safe and efficient operations in NOAA-sponsored underwater activities.[1]

Inside Hangar 5, home of the NOAA's AOC.

NOAA's ship fleet was created when various United States Government scientific agencies merged to form NOAA on 3 October 1970. At that time, the United States Coast and Geodetic Survey and the United States Fish and Wildlife Service's Bureau of Commercial Fisheries were abolished, and the ships that had constituted their fleets – the hydrographic survey ships of the Coast and Geodetic Survey and the fisheries research ships of the Bureau of Commercial Fisheries – combined to form the new NOAA fleet.

The NOAA fleet provides hydrographic survey, oceanographic and atmospheric research, and fisheries research vessels to support NOAA's strategic plan elements, and mission. Some ships of the fleet have been retired from the United States Navy or other maritime services. The vessels are located in various locations around the United States. The ships are managed by the Marine Operations Center, which has offices in Norfolk, Virginia, and Newport, Oregon. Logistic support for these vessels is provided by the Marine Operations Center offices or, for vessels in Woods Hole, Massachusetts; Charleston, South Carolina; Pascagoula, Mississippi; San Diego, California; and Honolulu, Hawaii; by port captains located in those ports.

NOAA's aircraft and ship fleet is operated and managed by a combination of NOAA Corps Officers, wage marine and civilian employees. Officers and OMAO civilians frequently serve as chief scientists on program missions. The wage marine and civilian personnel include licensed engineers, mechanics, navigators, technicians, and members of the engine, steward, and deck departments. Administrative duties and navigation of the vessels are performed by the commissioned officers. The aircraft and ship's officers and crew provide mission support and assistance to embarked scientists from various NOAA laboratories as well as the academic community.

To complement NOAA's research fleet, OMAO is fulfilling NOAA's ship and aircraft support needs with contracts for ship and aircraft time with other sources, such as the private sector and the university fleet.

Notice: This article incorporates material taken from the public domain website of the NOAA OMAO.