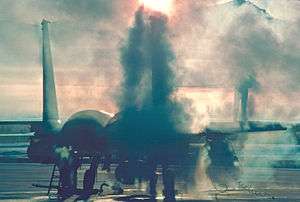 Photo taken during an Art Program trip to Elmendorf AFB Alaska, for Operation "Brim Frost", Jan '87. De-icing of an F-15 at -40 degrees.

The program expanded to offer artists the opportunity to travel with the Air Force to locations around the world to witness military facilities and exercises for the purpose of recording these events in the form of paintings. Artists were selected from the various professional groups around the nation, such as the "Societies of Illustrators" in New York, Los Angeles, and San Francisco.

The Society has its headquarters and museum located in New York City. Today, there are nearly 9,000 works in the Air Force Art Program and the Society of Illustrators has been joined by other organizations* and independent artists to continue documenting Air Force personnel, equipment, locations and activities. While they accord the artist all courtesies and privileges as an equivalent grade of GS15/rank or Colonel, the artist’s income and opportunities are suspended during the assignment and creation of the work. Additionally, all work is donated to the Air Force without any permissible tax deductions.

Artists of the Air Force Art Program where actually caught in the fighting of Hue, Vietnam, during the Tet Offensive.

Every eighteen months, a tuxedo banquet was held in Washington DC, for the participating artists of that period. Hosted by the Secretary of the Air Force.

The Program lost considerable funding during the Reagan administration military cutbacks in the late 1980s.