In the United States Army, Navy, Marine Corps, Coast Guard and Air Force, a guidon is a military standard that company or platoon-sized elements carry to signify their unit designation and corps affiliation or the title of the individual who carries it. A basic guidon can be rectangular, but sometimes has a triangular portion removed from the fly (known as "swallow-tailed").

The guidon is a great source of pride for the unit, and several military traditions have developed around it, stemming back from ancient times. Any sort of disgrace toward the guidon is considered a dishonor of the unit as a whole, and punishment is typical. For example, should the guidon bearer drop the guidon, they must fall with it and perform punishment, often in the form of push-ups. Other units may attempt to steal the guidon to demoralize or antagonize the unit. Veteran soldiers know not to give up the guidon to anyone outside their unit, but new recruits may be tempted into relinquishing it by a superior, especially during a unit run.

As described in Chapter 6 of Army Regulation 840-10, guidons are swallow-tailed marker flags in branch-of-service colors, measuring 20 inches (51 cm) at the hoist by 27 inches (69 cm) at the fly, with the swallow-tail end forked 10 inches (25 cm). Previously guidons were made of wool bunting, and if serviceable these older versions may still be used. Current guidons are made of heavyweight rayon banner cloth. Old guidons show letters and numerals reversed as if printed through on the reverse of the guidon. Current guidons are made so that letters and numerals read correctly on both sides.

Lettered companies (troops and batteries in the cavalry and field artillery respectively) of battalions (squadrons in the cavalry) have guidons displaying the branch insignia, the company letter, and the battalion and regimental numbers. The base color of the guidon is the first named color of the applicable branch, e.g. scarlet for field artillery, with the letters, numerals and insignia applied in the second named color of the branch, e.g. yellow for field artillery. For companies of separate battalions, the branch insignia is centered on the guidon between the battalion number above and the company letter below. For companies of battalions of regiments, the number above the insignia is that of the regiment; the number of the battalion is vertically centered between the insignia and the hoist. Groups use diagonal stripes of the branch's secondary color.[1][2]

Separate numbered TO&E companies have guidons with their numerical designation under the branch insignia, e.g. the guidon of the 380th Quartermaster Company is buff with the insignia of the Quartermaster Corps over the numerals “380” in ultramarine blue, these being the named colors of the branch. Headquarters companies of groups, brigades, divisions and corps have guidons of a design corresponding to that of their Organizational Flag, e.g. the guidon of a headquarters battery of a Field Artillery Brigade or Fires Brigade would be vertically divided, scarlet and yellow, with the brigade's shoulder sleeve insignia centered.[3][4][5]

Headquarters elements of Army commands, agencies, garrisons, centers, schools, depots and miscellaneous organizations are authorized guidons of distinctive design and colors. Generally these guidons follow the design of the unit’s Organizational Flag. Various units not oriented to a specific branch, e.g. US Army Garrisons, have a teal blue guidon with the branch immaterial insignia (the Coat of Arms of the U.S. within a ring) in yellow.[6]

Exceptions to the use of branch colors for guidons are found in the infantry and cavalry. The infantry branch colors are light blue and white, but infantry guidons have a field of Old Glory blue (the same shade of blue as used for the canton of the US national flag). The cavalry branch colors are yellow and dark blue. Cavalry guidons, however, are horizontally divided, scarlet over white, with troop letters and squadron/regimental numbers in white and scarlet, but no branch insignia.[2]

There are two types of guidons used by the Corps of Cadets at the United States Military Academy. “Dress” guidons are horizontally divided, golden yellow over silver gray, with the letters “USCC” centered between the regimental number on the upper stripe and the company letter on the lower stripe. “Field” guidons have the regimental number only. All letters and numerals are black.[7] Initial entry training platoons carry colored guidons to signify what phase of training they have attained. The guidon bearer normally stands with the platoon guide when stationary and marches at the head of the column. Although IET guidons may have streamers attached, they are typically undecorated.

Any unit citation, war service or campaign streamer may be attached to guidons. Guidon-bearing elements of US Army Regimental System units are entitled to display all streamers awarded to the regiment, with those earned by its own higher echelon (batttalion or squadron) denoted by the addition of the Earned Honor Device, an embroidered laurel wreath, at the fly. Streamers for guidons are 1 3⁄8 by 24 feet (42 cm × 732 cm).[8][9]

In recent years, the ongoing reorganization of the Army has led to the creation of new types of units, e.g. Sustainment Brigades and Fires Brigades, but generally their flags and guidons are of the pattern described above. 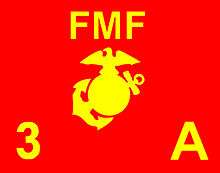 Recruit training units do not have any branch of service indication on their guidons; boot camp platoon guidons only display the platoon number (such as "3081") in yellow/gold against a scarlet background. During the first phase of training (i.e., before initial drill), the guidon's foreground and background colorations are exchanged, yielding a red platoon number against a yellow/gold background.

Fleet Marine Forces units have "FMF" emblazoned above the Marine Emblem, non infantry and artillery reserve units display "USMCR," while all infantry, artillery, and active units carry a "USMC". The regimental-level numeral will be displayed in the lower left corner, unless a higher or lower command numeral provides better identification (for example, a battalion HQ company would display the battalion's numeral instead of the regiment). The company level designation letter, abbreviated title, or number will be in the lower right corner.

Charlie Company 1st Battalion 7th Marines "Suicide Charley" is one of the only units authorized a second guidon in the United States Marine Corps. Charlie Company 1/7 aka "Suicide Charley" is authorized a white guidon with a skull and crossbones. For more information visit Suicide Charley "C CO 1/7 USMC" Fox Company 2nd Battalion 5th Marines "Blackhearts" are authorized white markings on a black guidon, Crossed rifle and shattered paddle and a Ka-Bar inset behind a black heart logo; skull wearing camouflage "Boonie Cover" superimposed at center above "Blackhearts." The emblem is also seen on the Company's black T-shirts which are authorized for Company PT uniform in place of a green T-shirt. Versions of this emblem also have the words, "Special Operations Capable" across the bottom.

No additional attachments are authorized, including streamers, bands, or the like. Some units incorporate additional mascots into unofficial guidons. 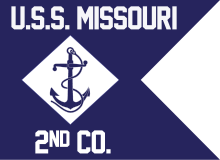 Navy ships and squadrons may display a unit guidon while parading ashore. It measures 20 1⁄8 by 27 3⁄4 inches (51 cm × 70 cm) with a 10 inches (25 cm) swallowtail, is blue with white text, and depicts a fouled anchor within a diamond (identical to the insignia of the Naval Infantry Flag).[13] Prior to World War II, a red flag was used for naval artillery units. Companies of the Brigade of Midshipmen attending the United States Naval Academy carry a gold guidon with blue numerals.[14][15] Officer Candidate School Companies carry blue guidons with white lettering and a white bulldog.[16] 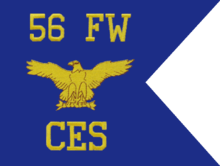 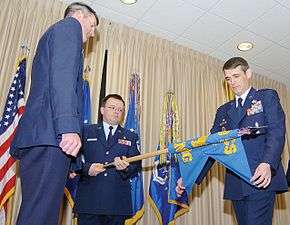 Air Force personnel case a squadron guidon as part of an inactivation ceremony.

In the Air Force, guidons are ultramarine blue wool and gold in nylon, nylon, or polyester bunting, 20 by 27 inches (51 cm × 69 cm) to end of the swallowtail, and forked 10 inches (25 cm). An Air Force yellow American Eagle design appears on the front of the guidon and on the reverse side as if printed through. Above the design is the designation of the parent unit; below it is the designation of the squadron. When the number of the squadron and the parent organization are the same, the lower line indicates only the alphabetical portion of the squadron designation. Numerals and lettering are yellow, from 1 3⁄4 by 3 1⁄2 inches (4.4 cm × 8.9 cm) tall, and in varying widths. Lettering and numerals appear on both sides of the guidon, reading from left to right on both sides.[17][18]

Campaign and service streamers earned by a unit are displayed on that unit's flag or guidon.