List of ships of the United States Air Force 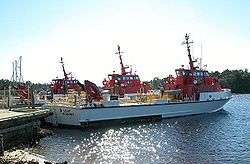 The U.S. Air Force still operates a small fleet of drone recovery vessels nicknamed the "Tyndall Navy". These ships recover pieces of wreckage from drones and aerial targets from the waters of the Gulf of Mexico. The largest of these vessels are three 120-foot ships operated by the 82nd Aerial Targets Squadron, which is based at Tyndall AFB, Florida.[3]