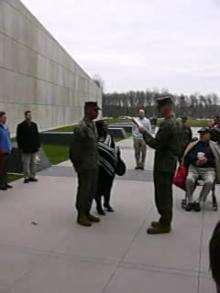 The oath of enlistment is a military oath made by members of the United States armed forces who are not commissioned officers.

Upon enlisting in the United States Armed Forces, each person enlisting in an armed force (whether a Soldier, Sailor, Coast Guardsman, Airman, or Marine) takes an oath of enlistment required by federal statute in 10 U.S.C. § 502. That section provides the text of the oath and sets out who may administer the oath:

§ 502. Enlistment oath: who may administer


(a) Enlistment Oath.— Each person enlisting in an armed force shall take the following oath:
"I, (state name of enlistee), do solemnly swear (or affirm) that I will support and defend the Constitution of the United States against all enemies, foreign and domestic; that I will bear true faith and allegiance to the same; and that I will obey the orders of the President of the United States and the orders of the officers appointed over me, according to regulations and the Uniform Code of Military Justice. So help me God."

A commissioned officer of any service will administer the Oath of Enlistment in DD Form 4 orally, in English, to each application. Make a suitable arrangement to ensure that the oath is administered in a dignified manner and in proper surroundings. display the U.S. flag prominently near the officer giving the oath. The words "So help me God" may be omitted for persons who desire to affirm rather than to swear to the oath.[1]

There is no duration defined in the Oath itself. The term of service for each enlisted person is written on the DD Form 4 series, the contract which specifies the enlistment period, which for a first-time enlistee is typically four or six years, which can be a combination of active duty and time spent in a reserve component, although enlisted reservists are subject to activation until the end of the eight-year initial military obligation.

Officers do not take the same oath as enlisted personnel, instead taking a similar United States Uniformed Services Oath of Office.