Sikhs in the United States military 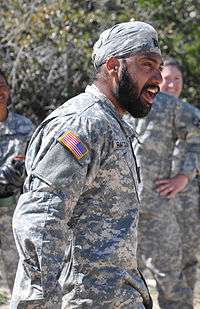 There have been Sikhs in the United States military as far back as World War I. Sikhs have served through all subsequent wars until the present day. Since the 1980s, observant Sikhs have faced difficulty in serving due to a discontinuation of exemptions to uniform standards which previously allowed Sikhs to maintain their religiously-mandated beards and turbans while in uniform. 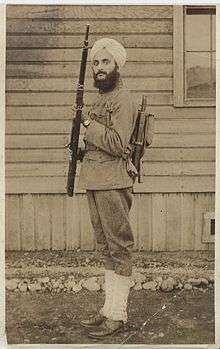 One of the earliest Sikh soldiers in the American military was one Bhagat Singh Thind, who although not a U.S. citizen joined the United States Army and served in World War I. Dr Bhagat Singh Thind was the first Sikh in US military service to be granted the right to wear a turban while on active duty in the US Army. Thind requested citizenship at the end of the war, but was refused. He was granted citizenship in 1936.[1] Sikh participation as a part of U.S. forces in World War I was limited due to their small population in the country, but 138,000 Sikhs served in other Allied forces. Large numbers of Sikhs served in U.S. forces during World War II, and all American wars following.

During World War II Sikh units of the Indian and Commonwealth forces served under Allied command alongside or in cooperation with American forces and earned a reputation for bravery, serving notably against the Germans and Italians in East Africa, North Africa, Italy, France, Western Europe and against the Japanese in the China-Burma-India Theater. Notable actions involving Sikhs fighting alongside American forces occurred at the Battle of Monte Cassino and the assault on the Gustav Line during the Italian Campaign where both American and Indian Army Sikh (as well as Australian, Canadian, New Zealand, Polish and South African) units suffered heavy casualties. Other notable battles of World War II that involved units composed of Sikhs included both the First and Second Battles of El Alamein, Kohima, Imphal, and the Burma campaign in conjunction with Merrill's Marauders.[1]

Restrictions due to uniform regulations

Prior to the 1980s — and from the time of Chief of Naval Operations Admiral Elmo Zumwalt's "Z-grams" numbers 57 and 70, in early November 1970 and late January 1971 respectively, permitting their presence on all United States Navy personnel until the timeframe of Ronald Reagan's presidency — the United States Armed Forces allowed beards while in uniform.[2] However, due to a change in regulations, the U.S. Armed Forces rescinded permission for beards in uniform, except for those who commenced their service in the military before 1986.[2] As the beard is a requirement according to the Rehat Maryada, the current regulation[3] has created a regulatory barrier that has kept observant Sikh men from serving in the United States Armed Forces in large numbers. 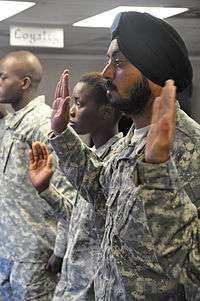 In April 2009, Sikh Army Captain Kamaljeet S. Kalsi, a doctor, with the help of the Sikh Coalition, filed an objection to the Inspector General and the Department of Defense to be allowed to continue to serve with his religious apparel intact.[4] Army Reserve Second Lieutenant Tejdeep Singh Rattan, a dentist, joined in filing the petition.[5] CPT Kalsi joined the Army via its Health Professions Scholarship Program and had been reassured by the recruiter that wearing the uniform while retaining his religiously required appearance and apparel would not be a problem.[5] CPT Kalsi had even served in uniform without any problems at West Point and Travis Air Force Base.[4] Yet, a problem arose in early 2009 when the Pentagon told CPT Kalsi and 2LT Rattan that they would be called to active duty and would need to shave their beards and stop wearing their turbans.[6]

The Sikh Coalition argued that not allowing the servicemembers to continue to maintain their appearance according to their religion violated the Religious Freedom Restoration Act of 1993.[4] The Army argued that continued wear of the turban and beard violated current regulation, that would hinder the servicemembers from meeting health, safety, and mission requirements including the use of gas masks.[4] In late October 2009, CPT Kalsi was allowed an exemption to the policy,[7] and would be able to serve while adhering to his religious beliefs.[8] The Army continues to maintain that these were specific determinations due to the individual case and that present regulations will not change,[9] however the Sikh Coalition holds out that this will be the beginning of a policy shift that will allow other Sikhs to serve their country in uniform.[9]

The case of 2LT Rattan was put on hold, pending his completion of the dental boards exam.[7] Upon graduation from basic officer training at Fort Sam Houston as Captain on March 22, 2010 Rattan was also granted an exemption.[10] A third serviceman, Specialist Lamba, who graduated from Fort Jackson in November 2010 was also granted an exemption.[11]