Single-staff renunciates are distinct in their practices from Shaiva trishuldhari or "trident-wielding renunciates" and Vaishnava traditions of Tridandi sannyāsis.[4][note 1][note 2]

In the 8th century a section of the Ēkadaṇḍisannyāsins were organized by Adi Shankara into four maṭhas. However, the association of the Dasanāmis with the Shankara maṭhas remained nominal.[web 1] Any Hindu, irrespective of class, caste, age or gender can seek sannyāsa as an Ēkadaṇḍi renunciate in the Dasanāmi tradition. 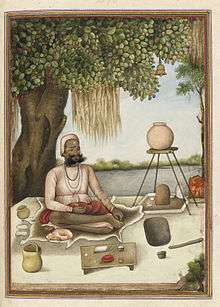 ēkadandis were already known during what is sometimes referred to as "Golden Age of Hinduism" (ca. 320-650 CE[5])

The "Golden Age of Hinduism"[5] (ca. 320-650 CE[5]) flourished during the Gupta Empire[6] (320 to 550 CE) until the fall of the Harsha[6] (606 to 647 CE). During this period, power was centralized, along with a growth of long distance trade, standardization of legal procedures, and a general spread of literacy.[6] Mahayana Buddhism flourished, but orthodox Shrauta Hinduism was rejuvenated by the patronage of the Gupta dynasty.[7] The position of the Brahmans was reinforced[6] and the first Hindu temples emerged during the late Gupta age.[6] The Mahābhārata, which probably reached its final form by the early Gupta period (c. 4th century),[8] already mentions "ēkadaṇḍi" and "tridaṇḍi".[9]

The Ēkadaṇḍis existed in the Tamil country during the south-Indian Pandyan Dynasty (3rd century BCE - 16th century CE) and the South-Indian Pallava dynasty (2nd - 9th centuries CE). Being wandering monastics, they were not settled in the brahmadeyas or settlement areas for Brahmins. There existed tax free bhiksha-bogams for feeding the Ēkadaṇḍi ascetics in the ancient Tamil country.[10]

Ēkadaṇḍis and Tridandis were also active in Eastern India, and appear to have existed there during the North-Indian Gupta Empire (320 to 550 CE ).[11]

According to R. Tirumalai, "There appears to have been no sectarian segregation of the Shaiva (Ēkadaṇḍi) and Srivaishnava (Tridandi Sannyāsins)".[12]

Establishment of the Dasanami Sampradaya 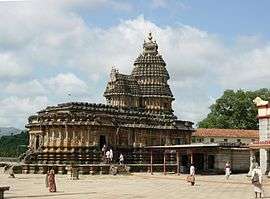 At the beginning of what is referred to as "Late classical Hinduism",[13] which lasted from 650 till 1100 CE,[13] Shankara established the Dasanami Sampradaya.

The kingdoms were ruled via a feudal system. Smaller kingdoms were dependent on the protection of the larger kingdoms. "The great king was remote, was exalted and deified",[15] as reflected in the Tantric Mandala, which could also depict the king as the centre of the mandala.[16]

The disintegration of central power also lead to regionalization of religiosity, and religious rivalry.[17][note 3] Local cults and languages were enhanced, and the influence of "Brahmanic ritualistic Hinduism"[17] was diminished.[17] Rural and devotional movements arose, along with Shaivism, Vaisnavism, Bhakti and Tantra,[17] though "sectarian groupings were only at the beginning of their development".[17] Religious movements had to compete for recognition by the local lords.[17] Buddhism lost its position, and began to disappear in India.[17] 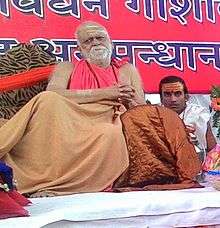 Shankara, himself considered to be an incarnation of Shiva,[web 1] established the Dashanami Sampradaya, organizing a section of the Ēkadaṇḍi monastics under an umbrella grouping of ten names.[web 1] Several other Hindu monastic and Ēkadaṇḍi traditions remained outside the organization of the Dasanāmis.[19][20][21]

Adi Shankara organized the Hindu monastics of these ten sects or names under four maṭhas or monasteries, with headquarters at Dvārakā in the west, Jagannatha Puri in the east, Sringeri in the south and Badrikashrama in the north.[web 1] Each maṭha was headed by one of his four main disciples, who each continued the Vedanta Sampradaya.

Monastics of these ten orders differ in part in their beliefs and practices, and a section of them is not considered to be restricted to specific changes made by Shankara. While the Dasanāmis associated with the Shankara maṭhas follow the procedures enumerated by Adi Śankara, some of these orders remained partly or fully independent in their belief and practices; and outside the official control of the Shankara maṭhas.

The association of the Dasanāmis with the Smartha tradition or Advaita Vedānta is not all-embracing. One example is the Kriyā Yoga tradition that considers itself eclectic (see: Eclecticism), with ancient[web 2] unchangeable beliefs, and outside the ambit of differences in the understanding of Vedanta. Other examples are the Tantric Avadhūta Sampradāyas and Ekadaṇḍi sannyāsa traditions outside the control of the Shankara maṭhas[21] The Dasanāmis or Ēkadaṇḍis also founded, and continue to found or affiliate themselves with, maṭhas, ashrams and temples outside the control of the Shankara maṭhas.[web 2][web 3]

The Advaita Sampradaya is not a Saiva sect,[web 1][22] despite the historical links with Shaivism:

Advaitins are non-sectarian, and they advocate worship of Siva and Visnu equally with that of the other deities of Hinduism, like Sakti, Ganapati and others.[web 1]

Nevertheless, contemporary Shankaracaryas have more influence among Saiva communities than among Vaisnava communities.[web 1] The greatest influence of the gurus of the Advaita tradition has been among followers of the Smartha Tradition, who integrate the domestic Vedic ritual with devotional aspects of Hinduism.[web 1]

According to Nakamura, these maṭhas contributed to the influence of Shankara, which was "due to institutional factors".[23] The maṭhas which he built exist until today, and preserve the teachings and influence of Shankara, "while the writings of other scholars before him came to be forgotten with the passage of time".[24]

The table below gives an overview of the four Amnaya maṭhas founded by Adi Shankara, and their details.[web 4]

Expansion of the Dasanami Sampradaya

According to Pandey, the ēkadaṇḍis or Dasanāmis had established monasteries in India and Nepal in the 13th and 14th century.[web 5] 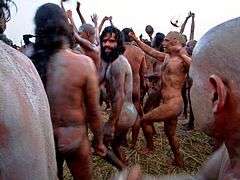 In the 16th century, Madhusudana Saraswati of Bengal organised a section of the Naga (naked) tradition of armed sannyasis in order to protect Hindus from the tyranny of the Mughal rulers. These are also called Gusain, Gussain, Gosain, Gossain, Gosine, Gosavi, Sannyāsi, Dasnāmi or Goswami in popular parlance.

Warrior-ascetics could be found in Hinduism from at least the 1500s and as late as the 1700s,[25] although tradition attributes their creation to Sankaracharya[web 6]

The naga sadhus generally remain in the ambit of non-violence presently, though some sections are also known to practice the sport of wrestling. The Dasanāmi sannyāsins practice the Vedic and yogic Yama principles of ahimsā (non-violence), satya (truth), asteya (non-stealing), aparigraha (non-covetousness) and brahmacārya (celibacy / moderation). The Dasanāmis are generally believed to be celibate, and grihastas or householder sannyāsis such as Lahiri Mahasaya and Bhupendranath Sanyal (Sanyal Mahāsaya) were a rarity.

The naga sadhus are prominent at Kumbha mela, where the order in which they enter the water is fixed by tradition. After the juna akhara, the Niranjani and Mahanirvani Akhara proceed to their bath. Ramakrishna Math Sevashram are almost the last in the procession.[26]

In the Indian religious and philosophical traditions, all knowledge is traced back to the Gods and to the Rishis who primarily envisioned the Vedas.

The current Acaryas, the heads of the maṭhas, trace their authority back to the four main disciples of Shankara,[web 9] and each of the heads of these four maṭhas takes the title of Shankaracharya ("the learned Shankara") after Adi Shankara.

The Advaita guru-paramparā (Lineage of Gurus in Non-dualism) begins with the mythological time of the Daiva-paramparā, followed by the vedic seers of the Ṛṣi-paramparā, and the Mānava-paramparā of historical times and personalities:[web 9][note 4]

Hindus who enter sannyāsa in the ēkadaṇḍi tradition take up one of the ten names associated with this sampradaya.

This section enumerates, in standardised manner, members of the Dasanāmī Order, listing each under his formal title and name, without the use of the honorifics[34] so cherished by fawning devotees and disciples. The word "swāmī" here is not an honorific. It is the title of an initiated member of the Dasanāmī Order. Entries are listed in standard form: TITLE (SWĀMĪ) + PERSONAL NAME + SUB-ORDER NAME. A few entries have the additional title (not honorific) of "Jagadguru Śankarācārya" which designates either one of the four supreme leaders of the order (somewhat similar to the position of Pope in Catholic Christianity). "Mahanta" is an administrative title designating an organizational position or office assigned to certain persons.