Bhakti yoga is a spiritual path or spiritual practice within Hinduism focused on the cultivation of love and devotion toward God. It has been defined as a practice of devotion toward God, solely motivated by the sincere, loving desire to please God, rather than the hope of divine reward or the fear of divine punishment.[1] Bhakti yoga is often considered by Hindus to be the easiest way for ordinary people to attain a spiritually liberated state, because although it is a form of yoga, its practice is not as rigorous as most other yogic schools, and it is possible to practice bhakti yoga without needing to become a full-time yogi.[1]

The origins of Bhakti can be seen in the upanishads, specifically the Shvetashvatara Upanishad.[2] The Bhagavad Gita, and the Puranas are important scriptures that expound the philosophy of bhakti yoga.[3][4] Hindu movements in which bhakti yoga is the main practice are called bhakti movements – the major schools of which are Vaishnavism, Shaivism, and Shaktism.[5]

Bhakti (Devanāgarī: भक्ति) is a Sanskrit term that signifies an attitude of devotion to a personal God which is similar to a number of interpersonal relationships between humans, such as between lovers or friends. The difference is that in bhakti, the relationship is between a soul (that of the devotee) and a "supersoul" (God).[4] Bhakti is a yogic path, in that the devotee's aim is of loving union with God. While the exact form (deity) through which God is worshiped and the exact nature of the union varies between different schools, the essence of the practice displays remarkable homogeneity.[1][3]

The Bhagavata Purana teaches nine primary forms of bhakti, as explained by Prahlada:[6]

(1) śravaṇa ("listening" to the scriptural stories of Krishna and his companions), (2) kīrtana ("praising"; this usually refers to ecstatic group singing), (3) visnoh smaraṇa ("remembering" or fixing the mind on Vishnu), (4) pāda-sevana (rendering service), (5) arcana (worshiping an image), (6) vandana (paying homage), (7) dāsya (servitude), (8) sākhya (friendship), and (9) ātma-nivedana (complete surrender of the self). (From Bhagavata Purana, 7.5.23-24.)

These nine principles of devotional service are described as helping the devotee remain constantly in touch with God. The processes of japa and internal meditation on the aspirant devotee's iṣṭa-devatā, or chosen deity, are especially popular in most bhakti yoga schools.[1]

"Out of a number of practices which lead to the ultimate goal of humanity – God-Realisation – Bhakti Yoga is one of the most important. Almost the whole of humanity is concerned with Bhakti Yoga, which, in simple words, means the art of worship. But it must be understood in all its true aspects, and not merely in a narrow and shallow sense, in which the term is commonly used and interpreted. The profound worship based on the high ideals of philosophy and spirituality, prompted by divine love, doubtless constitutes true Bhakti Yoga".[7]

“Bhakti softens the heart and removes jealousy, hatred, lust, anger, egoism, pride and arrogance. It infuses joy, divine ecstasy, bliss, peace and knowledge. All cares, worries and anxieties, fears, mental torments and tribulations entirely vanish. The devotee is freed from the Samsaric wheel of births and deaths. He attains the immortal abode of everlasting peace, bliss and knowledge”. The ultimate goal in the practice of Bhakti yoga is to reach the state of rasa (essence), a feeling of pure bliss achieved in the devotional surrender to the Divine.[8]

The Bhagavad Gita is a cornerstone of Hindu bhakti theism, especially among Vaishnavists. The Bhagavad Gita stresses that love and innocent pure intentions are the most powerful motive forces in a devotee's spiritual life.

Engage your mind always in thinking of Me, become My devotee, offer obeisances to Me and worship Me. Being completely absorbed in Me, surely you will come to Me. (B-Gita 9.34)[9]

One can understand Me as I am, as the Supreme Personality of Godhead, only by devotional service. And when one is in full consciousness of Me by such devotion, he can enter into the kingdom of God. (B-Gita 18.55) [10] 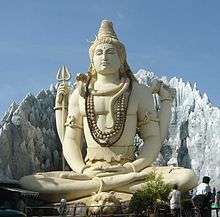 There are three main groups of bhakti yoga practitioners in Hinduism: the Shaivists who worship Shiva and his family, including Ganesh and Murugan; the Vaishnavists, who worship Vishnu and his avatars such as Krishna and Rama; and the Shaktists, who primarily worship Devis, such as Durga, Kali, Lakshmi and Parvati.[1]

All these groups have great respect for the others' primary deities, while considering their own paramount in their worship. According to some traditions, though each deity is perceived from a human perspective as having a slightly different form and somewhat different primary and secondary qualities, the most advanced practitioners in each group, as well as the scriptures of each group, believe that each deity is substantively intertwined with all the others in such a way that, essentially, they are all the same being: a single transcendent God.[3][4]

According to Vaishnava philosophy, however, all the deities are not the same and the Supreme Lord is strictly considered as Krishna. Other incarnations and expansions like Vishnu and the other deities of Shiva, Ganesh, Durga, etc.. are either plenary portions or portions of the plenary portions of the Lord, whereas Lord Krishna is the original Personality of Godhead and the only object of pure, unalloyed, unadulterated bhakti. kṛṣṇas tu bhagavān svayam (Bhagavata Purana 1.3.28).[11]