Not to be confused with Rhotacism (sound change). 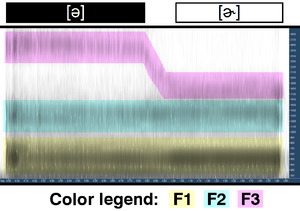 In phonetics, an r-colored or rhotic vowel (also called a retroflex vowel, vocalic r, or a rhotacized vowel) is a vowel that is modified in a way that results in a lowering in frequency of the third formant.[1] R-colored vowels can be articulated in various ways: the tip or blade of the tongue may be turned up during at least part of the articulation of the vowel (a retroflex articulation) or the back of the tongue may be bunched. In addition, the vocal tract may often be constricted in the region of the epiglottis.[1]

R-colored vowels are rare, occurring in less than one percent of the languages of the world.[1] However, they occur in two of the most widely spoken languages: North American English and Mandarin Chinese. In North American English, they are found in words such as butter, nurse and, for some speakers, start. They also occur in Quebec French, in some varieties of Brazilian Portuguese[2][3][4] and some Jutlandic dialects of Danish.

In the IPA, an r-colored vowel is indicated by a hook diacritic ( ˞) placed to the right of the regular symbol for the vowel. For example, the IPA symbol for schwa is ə, while the IPA symbol for an r-colored schwa is ə˞. This diacritic is the hook of ɚ, a symbol constructed by John Samuel Kenyon along with ᶔ by adding the retroflex hook (right hook) to ə and ɜ.[5] Both ɚ and ɝ were proposed as IPA symbols by editors of the American Speech in 1939 to distinguish it from əɹ.[6]

The IPA adopted several ways to transcribe r-colored vowels in its 1947 chart: the turned r ɹ; the superscript turned r əʴ, aʴ, eʴ, ɔʴ, etc.; the retroflex hook ᶕ, ᶏ, ᶒ, ᶗ, etc.;[7] and added ɚ as a variant of ᶕ in its 1951 chart.[8] In 1976 the retroflex hook was dropped due to insufficient usage.[9] In 1989, after the Kiel Convention, the hook of ɚ and ɝ was adopted as a diacritic placed on the right side of the vowel symbol for r-colored vowels, e.g. [ɛ˞ o˞ ɔ˞ ə˞].[10] The use of the superscript turned r (əʴ) is still commonly seen.

The r-colored vowels of General American can be written with "vowel-r" digraphs:[11]

In words such as start, many speakers have r-coloring only in the coda of the vowel, rather than as a simultaneous articulation modifying the whole duration. This can be represented in IPA by using a succession of two symbols such as [ɑɚ] or [ɑɹ], rather than the unitary symbol [ɑ˞].[11]

In European classical singing, dropping or weakening of r-colored vowels has been nearly universal and is a standard part of classical vocal training, but there have always been other singing styles, including traditional Irish singing styles and those of many performers of country music. In certain particular cases, a vowel + /r/ is pronounced instead as two syllables: a non-rhotic vowel followed by a syllabic /r/.

In Mandarin, the rhotacized ending of some words is the prime way by which to distinguish speakers of Standard Northern Mandarin (Beijing Mandarin) and Southwestern Mandarin from those of other forms of Mandarin in China. Mandarin speakers call this phenomenon erhua. In many words, the -r suffix (simplified Chinese: 儿; traditional Chinese: 兒) is added to indicate some meaning changes. If the word ends in a velar nasal (ng), the final consonant is lost and the vowel becomes nasalized. Major cities that have this form of rhotacized ending include Beijing, Tianjin, Tangshan, Shenyang, Changchun, Jilin, Harbin, and Qiqihar. This erhua has since spread to other provincial capitals not home to Standard Mandarin, such as Shijiazhuang, Jinan, Xian, Chongqing, and Chengdu.

In rhotic accents of Standard Mandarin, such as those from Beijing, Tianjin, most of the Hebei province (e.g. Tangshan, Baoding, Chengde), eastern Inner Mongolia (e.g. Chifeng, Hailar), and in the Northeast, vocalic r occurs as a diminutive marker of nouns (pinyin: ér) and the perfective aspect particle (Chinese: 了; pinyin: le). This also occurs in the middle syllables of compound words consisting of 3 or more syllables. For example, the famous restaurant Go Believe (狗不理) in Tianjin is pronounced as 'Gourbli' (Gǒu(r)bùlǐ → Gǒurblǐ). 'Do not know' (不知道 bùzhīdào) is pronounced as 'burdao' (bù(r)zhīdào → bùrdào). The street Dazhalan (大栅栏) in Beijing is pronounced as 'Da-shi-lar' (Dàshànlàn(r) → Dàshílàr).

The Algic language Yurok illustrated rhotic vowel harmony. The non-high vowels /a/, /e/, and /o/ could become /ɚ/ in a word that has /ɚ/. For example, the root /nahks-/ 'three' became /nɚhks-/ in the word /nɚhksɚʔɚjɬ/ 'three (animals or birds)'.[13]

The Caipira dialect of Brazilian Portuguese expresses some /r/ phonemes as an allophone [ɚ] in some cases where more standard dialects would use [ʁ] or [ɾ]. This appears in words like "porta" (door) and "bar" (bar).