The Senate, a continuing body, was called into special session by President Buchanan, meeting in March 4 to March 28, 1861.[12] The border states and Texas were still represented. Shortly after the Senate session adjourned, Fort Sumter was attacked. The immediate results were to draw four additional states[13] "into the confederacy with their more Southern sisters", and Lincoln called Congress into extraordinary session on July 4, 1861. The Senate confirmed calling forth troops and raising money to suppress rebellion as authorized in the Constitution.[14]

Both Houses then duly met July 4, 1861. Seven states which would send representatives held their state elections for Representative over the months of May to June 1861.[15] Members taking their seats had been elected before the secession crisis, during the formation of the Confederate government, and after Fort Sumter.[9]

Once assembled with a quorum in the House, Congress approved Lincoln's war powers innovations as necessary to preserve the Union.[16] Following the July Federal defeat at First Manassas, the Crittenden Resolution[17] asserted the reason for "the present deplorable civil war." It was meant as an address to the nation, especially to the Border States at a time of U.S. military reverses, when the war support in border state populations was virtually the only thing keeping them in the Union.[18]

Following resignations and expulsions occasioned by the outbreak of the Civil War, five states had some degree of dual representation in the U.S and the C.S. Congresses. Congress accredited Members elected running in these five as Unionist (19), Democratic (6), Constitutional Unionist (1) and Republican (1). All ten Kentucky and all seven Missouri representatives were accepted. The other three states seated four of thirteen representatives from Virginia, three of ten Tennesseans, and two of four from Louisiana.[19]

The Crittenden Resolution declared the civil war "… has been forced upon the country by the disunionists of the southern States…" and it would be carried out for the supremacy of the Constitution and the preservation of the Union, and, that accomplished, "the war ought to cease". Democrats seized on this document, especially its assurances of no conquest or overthrowing domestic institutions (emancipation of slaves).[18]

Congressional policy and military strategy were intertwined. In the first regular March session, Republicans superseded the Crittenden Resolution, removing the prohibition against emancipation of slaves.[18]

In South Carolina, Gen. David Hunter, issued a General Order in early May 1861 freeing all slaves in Florida, Georgia, and South Carolina. President Lincoln quickly rescinded the order, reserving this "supposed power" to his own discretion if it were indispensable to saving the Union.[20] Later in the same month without directly disobeying Lincoln's prohibition against emancipation, General Benjamin Butler at Fort Monroe Virginia declared slaves escaped into his lines as "contraband of war", that is, forfeit to their rebel owners.[21] On May 24, Congress followed General Butler's lead, and passed the First Confiscation Act in August, freeing slaves used for rebellion.[22]

In Missouri, John C. Frémont, the 1856 Republican nominee for President, exceeded his authority as a General, declaring that all slaves held by rebels within his military district would be freed.[22] Republican majorities in Congress responded on opening day of the December Session. Sen. Lyman Trumbull introduced a bill for confiscation of rebel property and emancipation for their slaves. "Acrimonious debate on confiscation proved a major preoccupation" of Congress.[18] On March 13, 1862, Congress directed the armies of the United States to stop enforcing the Fugitive Slave Act. The next month, the Congress abolished slavery in the District of Columbia with compensation for loyal citizens. An additional Confiscation Act in July declared free all slaves held by citizens in rebellion, but it had no practical effect without addressing where the act would take effect, or how ownership was to be proved.[23]

Lincoln's preliminary Emancipation Proclamation was issued September 22, 1862.[23] It became the principal issue before the public in the mid-term elections that year for the 38th Congress. But Republican majorities in both houses held (see 'Congress as a campaign machine' below), and the Republicans actually increased their majority in the Senate.[24]

On January 1, 1863, the war measure by executive proclamation directed the army and the navy to treat all escaped slaves as free when entering Union lines from territory still in rebellion. The measure would take effect when the escaped slave entered Union lines and loyalty of the previous owner was irrelevant.[25] Congress passed enabling legislation to carry out the Proclamation including "Freedman's Bureau" legislation.[26] The practical effect was a massive internal evacuation of Confederate slave labor, and augmenting Union Army teamsters, railroad crews and infantry for the duration of the Civil War.

Joint Committee on the Conduct of the War

Congress assumed watchdog responsibilities with this and other investigating committees.

The principle conflict between the president and congress was found in the Joint Committee on the Conduct of the War. Eight thick volumes of testimony were filled with investigations of Union defeats and contractor scandals.

They were highly charged with partisan opinions "vehemently expressed" by chair Benjamin Wade of Ohio, Representative George Washington Julian of Indiana, and Zachariah Chandler of Michigan.[27]

Sen. Chandler, who had been one of McClellan's advocates promoting his spectacular rise,[28] particularly documented criticism of McClellan's Peninsular Campaign with its circuitous maneuvering, endless entrenchment and murderous camp diseases. It led to support for his dismissal.

A congressional committee could ruin a reputation, without itself having any military expertise. It would create the modern Congressional era in which generals fought wars with Congress looking over their shoulders, "and with public opinion following closely behind."[27]

Republican majorities in both houses, apart from pro-union Democrats, and without vacant southern delegations, were able to enact their party platform. These included the Legal Tender Act, February 20, 1862, and increases in the tariff that amounted to protective tariffs. The Homestead Act, May 20, 1862, for government lands, and the Morrill Land Grant Act, July 2, 1862, for universities promoting practical arts in agriculture and mining, had no immediate war purpose. But they would have long range effects, as would the Pacific Railroad Act, July 1, 1862, for a transcontinental railroad.[29]

Treasury innovations were driven by Secretary Salmon P. Chase and necessity of war. The Income Tax of 1861, numerous taxes on consumer goods such as whiskey, and a national currency all began in Civil War Congresses.[29]

Speeches postage-free to District 1960, signature in upper right like 1863.

Member's floor speeches were not meant to be persuasive, but for publication in partisan newspapers. The real audience was the constituents back home. Congressional caucuses organized and funded political campaigns, publishing pamphlet versions of speeches and circulating them by the thousands free of postage on the member's franking privilege. Party congressional committees stayed in Washington during national campaigns, keeping an open flow of subsidized literature pouring back into the home districts.[30]

Nevertheless, like other Congresses in the 1850s and 1860s, this Congress would see less than half of its membership reelected.[31] The characteristic turmoil found in the "3rd Party Period, 1855-1896" stirred political party realignment in the North even in the midst of civil war. In this Congress, failure to gain nomination and loss at the general election together accounted for a Membership turnover of 25%.[32]

This Congress in the generations cycle 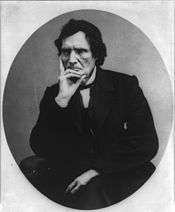 This first Civil War Congress was one of the last with a plurality of members drawn from the "Transcendental" generation born between 1792 and 1821.[33] They accounted for 87% of the national leadership, with 12% from the upcoming Gilded Age, and only 1% from the older Compromise Generation.[34] As an age cohort, they were idealistic and exalted "inner truth" on both sides of the Civil War, with neither side prepared to compromise its principles. Those few Compromisers left with a voice were pushed to the side. Representative Thaddeus Stevens was typical of his Transcendentalist generations northern expression: "Instruments of war are not selected on account of their harmlessness ... lay waste to the whole South."[35]

Congress did not accept secession. Most of the Representatives and Senators from states that attempted to secede left Congress; those who took part in the rebellion were expelled.

Although secessionist factions passed resolutions of secession in Missouri October 31, 1861,[42] and in Kentucky November 20, 1861,[43] their state delegations in the U.S. Congress remained in place, seven from Missouri and ten from Kentucky.[36] Exile state governments resided with Confederate armies out-of-state, army-elected congressional representatives served as a solid pro-Jefferson Davis administration voting bloc in the Confederate Congress.[44] 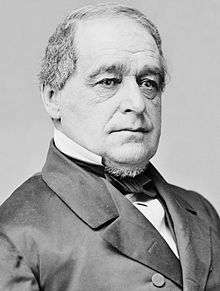 President of the Senate Hannibal Hamlin

The names of members of the House of Representatives are listed by their districts.

The count below reflects changes from the beginning of this Congress.

Members by committee assignments, Congressional Globe, as published July 8, 1861[48] Spellings conform to those found in the Congressional Biographical Dictionary.

Unless otherwise noted, all committees listed are Standing, as found at the Library of Congress[49]