Sathanur Dam is formed by Sathanur reservoir, one of the major dams in Tamilnadu. It is constructed across the . Sathanur Dam is constructed across the Thenpennai River also called as Pennaiyar River in Thandarampet taluk among Chennakesava Hills. The dam can be reached by road 30 km (19 mi) from Thiruvannamalai City. It was constructed in 1958. There is also a large crocodile farm and a fish grotto. Parks are maintained inside the dam for tourists to visit and the gardens have been used by the film industry.

The Sathanur Dam Project was proposed in the First Five Year Plans of India and started in the year 1953. The Dam works are completed in the Second Five Year Plans of India and is operational from 1958.[1] The project was inaugurated by the then Chief Minister of Tamil Nadu K. Kamaraj. This is one of the Major irrigation schemes were planned in Kamaraj’s period . The other projects are Lower Bhavani, Mani Muthuar , Cauvery Delta , Aarani River, Vaigai Dam , Amravathi , Sathanur , Pullambadi, Parambikulam and Neyaru Dams.[2]

The approved cost of the project is ₹2.02 Crores. The project was completed within ₹3.59 Crore (Actual cost). The project is covered under CADA (Command Area Development Authority) Scheme.[1] 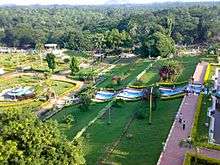 A view of the park from the bridge across the dam