Suruli falls (Tamil: சுருளி அருவி), is located 56 km (35 mi) from Theni and 10 km (6.2 mi) from Cumbum in the Theni District in Tamil Nadu, India. It is a 2 stage Cascading water fall. The Suruli River supplying the falls originates from the Meghamalai mountain range. The falls drop from a height of 150 feet (46 m) gathers into a pool, flows for a short distance and again plummets an additional 40 feet (12 m).

The beauty of this falls finds mention in the ancient Tamil epic, Silappathikaram written by the poet Ilango Adigal. Near Suruli Falls are 5 caves which represent Indian rock-cut architecture of the 11th Century.[1] On the Suruli river, The water is said to act as medicine and cure diseases. 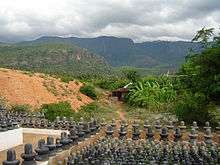 It is one of the major tourist attractions in the Theni district and draws tourists from different parts of the state, particularly during the southwest monsoon. June - October is the best season due to monsoon activity, though there is some flow year round. This falls is tourist friendly with showers and changing area near the falls. There are frequent bus services available from Cumbum and Uthamapalayam to reach this falls on the way to Periyar National Park. The Tamil Nadu Tourism Department celebrates summer festival at Suruli falls every year.[1] Construction of a bridge across the Suruli River at a cost of Rs.45 lakhs has increased tourist flow to the falls significantly.[2] 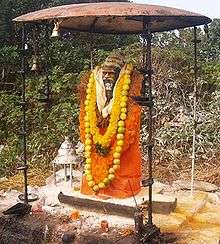 Suruli hills is the part of the Pothigai Malai. Pothigai hills is a highly divine and spiritual center. There is a story that when Shiva and Parvati entered into divine matrimony at Mount Kailash in the north, the place was unbalanced because of the large number of holy beings witnessing the wedding. Lord Shiva asked Agastya Maharishi to proceed to the South of India to balance the world. Agastya Maharishi then proceeded to Pothigai hills and balanced the world. Agastya Maharishi was able to visualise the wedding of Lord Shiva and Parvati on a Shivalingam that was at Tiru Kalyana Teertham at Pothigai hills. These hills are visited by several saints and sages from Himalayas particularly on a full moon day. The striking similarity between the profiles of Mt. Kailash and Agasthyamalai strengthen the mythological connections of these sacred peaks.

Suruli Velappar Temple in praise of Kartikeya is located near the falls. This temple is shaped like an OM Pranava. OM is the source mantra of the universal. This Mantra was generated before the Earth and all planets were created. At this cave one can hear the OM Mantra when you are in meditation frequency. This statement was told by Omgara guru Sidhar Gunaneethy, who is the founder of Rishi's Meditation.

800 m (2,600 ft) above the fall is the Kailasanathar Cave Temple. At Kailasanathar cave a lot of Sidhars meditate at a natural spring with waters having medicinal powers. Now also a lot of Meykanda Devar's souls are there. Kailasanathar cave is connected with the Sathura Giri Mahalingam Kovil Cave. The Palani temple Murugan statue was built by Bogar with Navapasana (A unique type of medicine created using nine types of poisons). The bogar installed the statue before he came to Kailasnathar temple. Here he took a lot of Herbals and constructed the Murugan's Navapasana Statue.

The Dargah at Suruli is an important worship place for some Muslims. This is named after Abubacker Masthan who lived around the 1630s in this area and is buried here.[4][5]

Instead, he suggested an alternate site near Suruli Falls. The Minister said this site did not pose the same problems that Singara posed and environmental and forest clearances should not be a serious issue. He also assured the DAE that the Ministry would facilitate necessary approvals for the alternative location. Dr. Naba K. Mondal of the Tata Institute of Fundamental Research, who is the spokesperson for the INO project said:

"But Suruliyar too is in a reserve forest area that is dense and would require cutting down of trees, something that was not required at Singara. Can the government assure us that clearance for this site will be given?" he asks. "Alternatively, we can move to the nearby Thevaram, which is about 20–30 km (12–19 mi) away from the Suruliyar falls. This forest area has only shrubs but there is no source of water here and water will have to be piped over a distance of 30 km (19 mi)," [6][7]