Ambattur aeri, or Ambattur lake, is a rain-fed reservoir which reaches top levels during the monsoon seasons. In November 2008, incessant monsoon rain filled the lake and encroachments on the north and south banks of the lake were demolished. It also caters to the drinking water needs of the Chennai city after Poondi and Chembarambakkam Lake.

Ambattur aeri is one of a chain of three water bodies, including the Korattur aeri and the Madhavaram aeri, where surplus water from one is transported to another.[1] 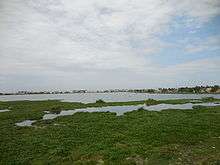 The lake as seen during a dry season

This article is issued from Wikipedia - version of the 9/4/2015. The text is available under the Creative Commons Attribution/Share Alike but additional terms may apply for the media files.