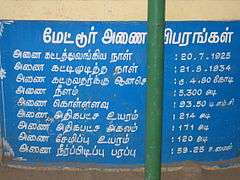 The Mettur Dam is one of the largest dams in India built in 1934.[1] It was constructed in a gorge, where the Kaveri River enters the plains. It provides irrigation facilities to parts of Salem, the length of Erode, Namakkal, Karur, Tiruchirappali and Thanjavur district for 271,000 acres (110,000 ha) of farm land.

The total length of the dam is 1,700 m (5,600 ft). The dam creates Stanley Reservoir. The Mettur Hydro Electrical power project is also quite large. The dam, the park, the major Hydro Electric power stations and hills on all sides make Mettur a tourist attraction. Upstream from the dam is Hogenakal Falls. The maximum level of the dam is 120 ft (37 m) and the maximum capacity is 93.47 tmc ft.

When the dam was planned English people gave some money and evacuated the people who lived in Nayambadi village which was in the place of present Mettur dam. When the water level of the dam recedes even now we can see age old Hindu temples and church emerge from it as a proof. Those people who migrated from Nayambadi have settled down in Martalli village and near by villages which are part of Kollegal district Karnataka state, then those villages were part of Erode district, Tamil Nadu. Those were the days Kaveri disputes were at its peak, whenever disputes broke out these villagers were the victims. People ran here and there to save their lives. Men tried to guard village with weapon, keeping their women and children locked in house.

The Mettur Dam has received attention of the public during the recent past because of the Kaveri water dispute between the States of Tamil Nadu and Karnataka.[2] Consequent to building dams, including the Kabini Dam, across the Kaveri River in Karnataka, the Mettur Dam does not receive much water during lean seasons. Thus, the Dam nearly goes dry during certain period of the year, when water is most needed by the farmers and general public of the states of Karnataka and Tamil Nadu. This has created serious dispute and tension between the neighbouring States of Karnataka and Tamil Nadu. Governments of the respective states, the Supreme Court and the Kaveri Tribunal have so far not been successful in solving the dispute. Meanwhile, Kaveri Water Tribunal has been constituted to solve the problem and the tribunal has passed it verdict of 419 tmc to Tamil Nadu, 270 tmc to Karnataka, 50 tmc to Kerala and 7 tmc to Puducherry, which has been held highly unsatisfactory by the states of Tamil Nadu and Karnataka and has challenged the verdict in the supreme court. The Central government after being condemned by the Judge of the Supreme court has finally notified the Kaveri Tribunal verdict in the Gazette. Farmers and People across the Agricultural State of Tamil Nadu burst out of Jubilation as the result of the long pending justice being established. It is however the people who are living in basin of Kaveri(Karnataka), thinks that justice is denied to them.

The capacity of the dam is 93.4 billion ft³ (2.64 km³) nearly twice that of its Karnataka counterpart of KRS, is revered as the life and life hood giving asset of Tamil Nadu. This dam was built in line with KRS Dam which was designed by Sir M Vishveswariah[3] in 1911 and completed in 1917 near Mysore.