Pykara is the name of a village and river 19 kilometres (12 mi) from Ooty in the Indian State of Tamil Nadu.[1] The Pykara River is considered very sacred by the Todas.[2] It rises at Mukurthi peak, flows northwards, and then turns to the west after reaching the edge of the plateau.[2] The river flows through Murkurti, Pykara and Glenmorgan dams, and forms part of an important hydro-electric power project.

The river flows over a series of waterfalls, the last two of 55 metres (180 ft) and 61 metres (200 ft) being known as Pykara Falls.[2] The falls are approximately 6 kilometres (4 mi) from the bridge on the main road. There is a forest rest house at Pykara. A boat house on the Pykara reservoir is an added attraction for tourists. Pykara boasts well-protected, fenced sholas, Toda settlements, large grassy meadows and good wildlife habitat. The Pykara Dam, falls and reservoir attract many tourists.[1] 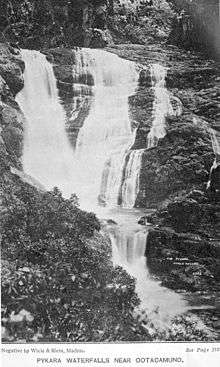 The dam is near the main Ooty–Gudalur road and includes a power station. One of the oldest power plants in south India, the Pykara station still functions, generating about 60 megawatts. The first unit of 6.65 MW was commissioned in October 1932.[3] Sir C.P. Ramaswamy Aiyar, Diwan of Travancore, worked with the British regime in 1920s and 1930s in the setting up of the Pykara project. A team of engineers led by H.G.Howard, a chief engineer in the then electricity department, was responsible for carrying out the project.[3]

The Pykara Station, declared as a heritage plant in September 1997, triggered the establishment of more hydro-electric power stations in the state. Today, the Nilgiris district alone boasts hydro-electric stations with an aggregate installed capacity of 837 MW. Five decades after establishment of the old plant, the Electricity Board (EB) authorities came up with a plan for the Pykara Ultimate Stage Hydro Electric Plant (PUSHEP), containing three units of 50 MW each. The construction of an underground powerhouse, 17 tunnels and the hydraulic head of 1,039 metres (3,409 ft) are the special features of the new plant. According to the EB, the hydraulic head is the highest in Asia. The access to the powerhouse is a tunnel 1.5 kilometres (0.9 mi) long.[3]