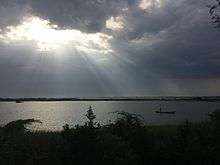 Veeranam Lake (Veeranaaraayanapuram Lake) is located 14 km (8.7 mi) SSW of Lalpet in Cuddalore district in the state of Tamil Nadu in South India. 1 km (0.62 mi) from Sethiyathope. The lake located 235 km (146 mi) from Chennai, India, is one of the water reservoirs from where water is planned to be supplied to Chennai.

The Veeranam project,[1] to supply water to Chennai, was conceived in 1967 by the then Chief Minister of Tamil Nadu, C. N. Annadurai, and executed under his successor, M. Karunanidhi. The project was subject to rampant corruption and money earmarked for the project was lost leading to stagnation of the project. The project's completion in 2004 was a major political victory for the AIADMK government of the time due to the project's long history of corruption and politicking. Ironically it was impossible to use any water from the lake since it had run dry, and the face-saving proposal adopted by the authorities was to dig 45 deep borewells around the area and pump the resulting water 235 km (146 mi) to Chennai via the pipeline.[2]

Veeranam Lake was built in the Tenth Century during the time of Greater Cholas, from 907–955 AD[3] and is an 16-kilometre (9.9 mi) long dam in northern Tamil Nadu. It was created by Rajaditya Chola. he named it after a title of his father Parantaka I Chola. This veeranam lake gets water from Kollidam via Vadavaru River. The lake remains dry for the major part of the year.

The opening chapter of the book Ponniyin Selvan is set on the banks of the Veera Narayana Lake. Kalki gives an elaborate description of the features of the lake and the way multiple rivers flow into the lake. He also makes a reference to the fact, that Ramanujacharya decided on the number of peetas based on the number of openings in the lake. This is the Veeraanam Lake formerly known as Veeranaaraayanapuram Lake.

Veeranam Lake, built by the Chola kings, is the main reservoir to meet the drinking water requirements of Chennai city. The lake draws water from the Cauvery River. The Lake is located at sethiyathope which is about 230 km south of Chennai. The lake has a capacity to store about 1,465 mcft of water.

Though the level in the Veeranam lake has dipped to 323 million cubic feet (mcft), the same amount of 180 mld (million litres a day) was being drawn for city supply.

Water released from the Mettur dam through Kollidam and Lower Anicut would also bring in sufficient inflow into the Veeranam Lake.

The lake received sufficient inflow in April enabling supply to the city for three months With heavy rain in Western Ghats, the lake almost got its storage capacity as it received inflow from the Cauvery tributaries Bhavani and Amaravathi.[4]