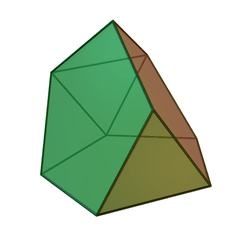 In geometry, the snub 24-cell or snub disicositetrachoron is a convex uniform 4-polytope composed of 120 regular tetrahedral and 24 icosahedral cells. Five tetrahedra and three icosahedra meet at each vertex. In total it has 480 triangular faces, 432 edges, and 96 vertices.

It is one of three semiregular 4-polytopes made of two or more cells which are Platonic solids, discovered by Thorold Gosset in his 1900 paper. He called it a tetricosahedric for being made of tetrahedron and icosahedron cells. (The other two are the rectified 5-cell and rectified 600-cell.)

The vertices of a snub 24-cell centered at the origin of 4-space, with edges of length 2, are obtained by taking even permutations of

The snub 24-cell has three vertex-transitive colorings based on a Wythoff construction on a Coxeter group from which it is alternated: F4 defines 24 interchangeable icosahedra, while the BC4 group defines two groups of icosahedra in a 8:16 counts, and finally the D4 group has 3 groups of icosahedra with 8:8:8 counts.

Conversely, the 600-cell may be constructed from the snub 24-cell by augmenting it with 24 icosahedral pyramids.

The snub 24-cell is also called a semi-snub 24-cell because it is not a true snub (alternation of an omnitruncated 24-cell). The full snub 24-cell can also be constructed although it is not uniform, being composed of irregular tetrahedra on the alternated vertices.

The snub 24-cell is a part of the F4 symmetry family of uniform 4-polytopes.

This article is issued from Wikipedia - version of the 5/17/2015. The text is available under the Creative Commons Attribution/Share Alike but additional terms may apply for the media files.