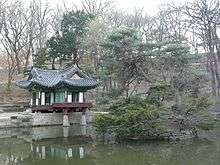 Korean gardens are natural, informal, simple and unforced, seeking to merge with the natural world.[1] Korean gardens were developed under the influences of the Chinese gardens.They have a history that goes back more than two thousand years,[2] but are little known in the west. The oldest records date to the Three Kingdoms period (57 BC- 668 AD) when architecture and palace gardens showed a development noted in the Korean History of the Three Kingdoms.

Korean garden culture can be traced back more than 2,000 years. In recent years, 300 documents have been found, written during the Koryo (918-1392) and Choson (1392-1910) dynasties, that contain detailed records about traditional Korean gardens, many of which survive and can be visited today.

In prehistoric times, Koreans worshipped nature, the sun, stars, water, rocks, stones, and trees. They especially believed that rocks had more power than water and other things in nature. Also, they have believed that rocks engendered God's good-will. Therefore, the arrangement of rocks is considered as one of the "essential" elements in designing the traditional Korean garden. Koreans have recently rediscovered their stone garden tradition in the stacked stone altars that express the ancient concept of a round heaven and square earth. Also Susok or "rock arrangement," gardens are commonly found. In recent years, in fact, there has been a revival of interest in rock arrangements in gardens. In general, Korean Susok (rock arrangement) garden culture can be described according to its stages of development. Even during the primitive agricultural period, stones were an essential element in building gardens. Then, rock arrangements for shamanic rituals were built in the shape of shrines or heavenly altars.

During the Three Kingdoms period (57 BC - 668 AD), palace gardens were erected on a grand scale with stones. And in the 4th century temple gardens were introduced along with Buddhism. Since the early Koryo dynasty, when Buddhism was established as the national religion, gardens evolved into the style of Hwagye (terraced rock garden), which represented Son (Zen) Buddhist rock arrangements. In the middle of the Koryo period, a new style of stone garden, called Imchon, which contained a pavilion and a stone pond in beautiful forest surroundings, became popular. During the Joseon dynasty, the Hwagye garden style was popular in the yards of many homes, and mansion gardens were usually built in Imchon style.

Style of a Korean garden

A Korean garden is natural, simple, and unforced. The garden involves both the people within it, and the buildings, in an unforced and at times irregular asymmetry, where the total landscape flows in a natural and progressive way without being forced, or ritualized. Western landscape designs by the likes of Capability Brown and the American Frederick Law Olmsted are comparable. 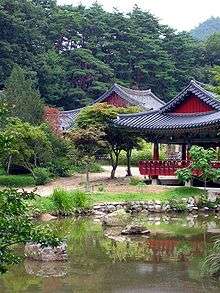 The most central and representative and relatively undisturbed classical Korean gardens are in three complexes.

National scholars in the Republic of Korea are now attempting to build a database through drawings, photographs, and surveys of the landscape of traditional gardens, and attempt recreations.

Rumoured attempts at recreating classical Korean gardens are said to be occurring on small scales in the Democratic People's Republic of Korea, but as yet there is no pictorial evidence.

Trees, plants and symbolic landscape of a Korean garden 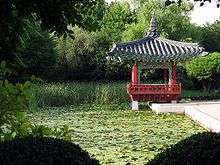 The vernacular of the Korean garden generally includes evergreen trees (various species of Korean pine) as a constant, flowering pear trees in the spring; bamboo forests alongside the secondary entrance gates of temples and palaces symbolize fidelity and honesty; and straight walks tend to be bordered by larger sized gravels of irregular shape. These features are especially noticeable in restorations.

Terrain tends to follow natural courses, and unlike the traditional Chinese garden, the use of straight paths is not proscribed, but lessened. Significant or important elements tend to face east. And Korean readings of Pungsu are regarded with great care, as geomancy was a strong influence in aligning the gardens with stelae, halls and buildings.

A Korean garden is interesting for attracting various birds. Animals were important to the natural appeal of the garden, so stone animals and animal motifs were common as well as actual fish, birds and other creatures.

A Korean garden will often have a decorative pavilion from which the surrounding garden can be enjoyed. Scholars from the yangban aristocracy sat in their pavilions constructed in either a cultivated garden or a natural area with its own view of the mountains or landscape. These served as places of relaxation and enjoyment and as a place to receive other men to be entertained or to talk about business. Playing chess, painting, resting and other leisurely activities were also pursued in these pavilions because of the exceptional view and surrounding beauty.

A Korean garden may also often have ponds because water is an important element to any garden for practical reasons such as plant watering and cooling the temperature. It was also important in old days because it prevented the wooden buildings of Korea from burning down. In the garden, a murky green color is prized unlike the Western love of blue water. Clear water is generally found in streams and natural water sources rather than ponds which are dug out on purpose in a convenient spot. Sometimes the water looks black if the inside of the pond is walled with stone blocks. Lotuses are usually the most common thing to plant in a pond, but there are many unusual options other than lotuses.

Huwon in Changduk Palace is a huge garden showing the refined style of the imperial family. It contains many trees which are hundreds of years old however and is carefully monitored and preserved from the public. The style of Huwon is very different from the gardens of the yangban classes and is much more refined. However, like all Korean gardens it has a very natural beauty in which the royal family could rest in a private place.

A traditional Korean garden is currently under construction in Nantes, France. "Suncheon Garden", a 5000 square metre site, is enclosed within Blottereau Park, and celebrates the 120th anniversary of diplomatic ties between South Korea and France. There are traditional Korean gardens in the Chapultepec Zoo in Mexico City; Gençlik Park in Ankara, Turkey; in Cairo, Egypt; le Jardin d'Acclimatation de Paris; Erholungspark Marzahn in Berlin; Grüneburgpark in Frankfurt; and at the VanDusen Botanical Garden in Vancouver. The Korean Ambassador's Residence Garden in Washington, D.C. is a typical example of a well-maintained Korean garden.