For other uses, see Brazzaville (disambiguation).

Brazzaville is the capital and largest city of the Republic of the Congo and is located on the Congo River. As of the 2007 census, it had a population of 1,373,382. The projection of the CNSEE (national statistics centre) shows an increase to 1.7 million by 2015,[1] but the projection was made before 2007 and based on a lower estimate of the population (1.26 million) than recorded in the census. The United Nations Population Division estimate for 2014 is 1.827 million. The populous city of Kinshasa (more than 10 million inhabitants in 2014),[2] capital of the Democratic Republic of the Congo, lies across the Congo River from Brazzaville. Together with Kinshasa, the combined conurbation of Kinshasa-Brazzaville has thus about 12 million inhabitants (although significant political and infrastructure challenges prevent the two cities from functioning with any meaningful connection). Over a third of the population of the Republic of Congo lives in the capital, and it is home to 40% of non-agricultural employment. It is also a financial and administrative capital. 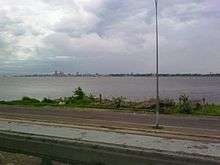 Kinshasa seen from Brazzaville. The two capitals are separated by the Congo River. 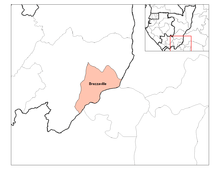 View of Brazzaville from space

In order to distinguish between the two African countries with "Congo" in their names, the Republic of the Congo is sometimes called Congo-Brazzaville, as opposed to Congo-Kinshasa (the Democratic Republic of the Congo, known from 1971 to 1997 as Zaïre, the capital of which is Kinshasa). Kinshasa lies on the southern bank of the Congo, across from Brazzaville. This is the only place in the world where two national capital cities are situated on opposite banks of a river, within sight of each other. There have been proposals to connect the two capitals by a Brazzaville–Kinshasa Bridge.

While Kinshasa lies to the south, Brazzaville lies to the north of the Congo River. The city is 506 kilometres (314 miles) inland from the Atlantic Ocean and approximately 474 kilometres (295 miles) south of the equator. The city is a commune that is separated from the other regions of the republic; it is surrounded by the Pool Region. Around the city is are large plains. The town is relatively flat, and situated at an altitude of 317 metres (1,040 feet). 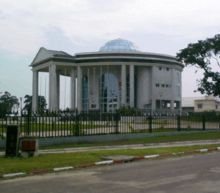 The city was founded on 10 September 1880 on the site of a Bateke village named Nkuna by an Italo-French explorer, Pierre Savorgnan de Brazza, after whom the city was named. The local leader, Makoko of the Téké, signed a treaty of protection with de Brazza which subjugated his lands to the French Empire. The city was built four years later in order to become a competitor with Léopoldville (now Kinshasa) which was built by the Belgians on the other side of the river. The site was occupied from October 1880 until May 1882 by a small squad of troops led by Senegalese Sergeant Malamine Camara, who prevented the land from falling into Belgian hands.

French control over the area was made official by the Berlin Conference of 1884. The city became the capital first of the French Congo, and then of French Equatorial Africa, a federation of states which encompassed Gabon, the Central African Republic and Chad. In 1924, the Congo-Océan railway was brought into service which linked Brazzaville with the port of Pointe-Noire. Construction of the railway resulted in the death of over 17,000 Africans which led to a revolt in 1928.[3]

During World War II Brazzaville, and the rest of French Equatorial Africa, remained beyond the control of Vichy France. In 1944, Brazzaville hosted a meeting of the Free French forces and representatives of France's African colonies. The resulting Brazzaville Declaration was intended to redefine the relationship between France and its African colonies after the war.

The city has frequently been a staging ground for wars, including conflicts between rebel and government forces and between forces of the Republic of Congo, the Democratic Republic of the Congo, and Angola. It was also the scene of bloody civil wars throughout the 1990s which resulted in thousands of civilian deaths and which forced hundreds of thousands of refugees to flee the city. 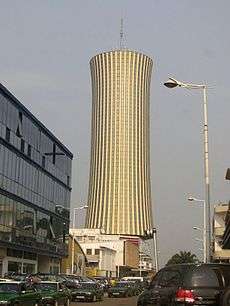 Industries present in Brazzaville include machine shops, textiles, tanning, and manufacturing. As a key port on the Congo River, the city takes deliveries of raw materials, such as rubber, wood and agricultural products. From here they are generally sent onward to Pointe-Noire for export.

As the capital city of the Republic of Congo, many companies, government organizations and NGOs have regional offices in the city. The World Health Organization has its regional office for Africa located in Brazzaville.[4]

Notable buildings in the city include St Anne's Basilica, built in 1949 by Roger Erell, and known for its green tiled roof; Erell also designed a house in the city for Charles de Gaulle. Other buildings include the Nabemba Tower and the Congressional Palace. Other features include the Marien Ngouabi Mausoleum, Brazzaville Zoo and the Poto-Poto School of Painting. The United States Embassy for the Republic of the Congo is also located in Brazzaville, as is the Dutch Honorary Consulate.

The World Health Organization Regional Office for Africa is based in Brazzaville on a vast campus at the Cité du Djoué.

Brazzaville, much like neighboring Kinshasa, features a tropical wet and dry climate. Its wet season, which runs from October–May, is longer than its dry season, which covers the remaining months. Brazzaville's driest months, July and August, see on average no significant precipitation. Since Brazzaville is south of the equator, its dry season begins at around its "winter" solstice, which is the month of June. The city experiences relatively consistent temperatures throughout the course of the year.

The city is home to Maya-Maya Airport which has regular flights to Pointe-Noire as well as international destinations in Africa, Europe and the Middle East.

The Congo-Ocean Railway has a station in the city and in 2014 was operating the La Gazelle train service every other day to Pointe-Noire and intermediate destinations.[8]

The city is also an important river port, with ferries sailing to Kinshasa and to Bangui via Impfondo. The Livingstone Falls lie on the outskirts of the city, where the Djoué River meets the Congo, rendering river transport to the coast impossible, qualifying the railway as a portage railway.

Although there is no organised public transport system privately owned buses are available in the capital.[9]

Taxis are available on every street and are easily recognized, being painted with a green body and white top, and the fare for a short trip is CF700. About twenty percent of the vehicles in Brazzaville are taxis. There are also collective taxis that drive certain routes and charge CF150.