This article is about the city Bujumbura. For provinces with this name, see Bujumbura Province.

Bujumbura (/ˌbuːdʒəmˈbʊərə/; French pronunciation: ​[buʒumbuʁa]), formerly Usumbura, is the capital, largest city, and main port of Burundi. It ships most of the country's chief export, coffee, as well as cotton and tin ore. It is on the north-eastern shore of Lake Tanganyika, the second deepest lake in the world after Lake Baikal.

The city center is a colonial town with a large market, the national stadium, a large mosque, and the cathedral for the Archdiocese of Bujumbura. Museums in the city include the Burundi Museum of Life and the Burundi Geological Museum. Other nearby attractions include the Rusizi National Park, the Livingstone-Stanley Monument at Mugere (where David Livingstone and Henry Morton Stanley visited 14 days after their first historic meeting at Ujiji in Tanzania), the presidential palace and the source of the southernmost tributary of the Nile, described locally as the source of the Nile.

Ferries sail from Bujumbura to Kigoma in Tanzania. The city is home to the Bujumbura International Airport and the University of Burundi.

Bujumbura grew from a small village after it became a military post in German East Africa in 1889. After World War I it was made the administrative center of the Belgian League of Nations mandate of Ruanda-Urundi. The name was changed from Usumbura to Bujumbura when Burundi became independent in 1962. Since independence, Bujumbura has been the scene of frequent fighting between the country's two main ethnic groups, with Hutu militias opposing the Tutsi-dominated Burundi army. Bujumbura today stands as an undeveloped city but remains to develop with its country.

According to the BBC, Bujumbura residents are known for their "tradition of Saturday morning runs started during Burundi's long years of ethnic conflict." Because the surrounding hills were home to armed militants before 2005, Bujumbura residents "would try to vent their fear and frustration and claustrophobia, by running, often in a group."[1]

In March 2014, President Pierre Nkurunziza banned jogging, due to "fears it was being used as a cover for subversion."[1] That same month, twenty-one opposition supporters were sentenced to life in prison for using "jogging" as a way to organize "an illegal demonstration that turned violent."[2] As of June 2014 in Bujumbura, "the authorities have since restricted jogging clubs to certain areas. All sports must now take place in nine parks in Bujumbura and other designated football pitches."[2]

Bujumbura is governed by a community council and community administrator. It is further divided into 13 communes, or neighborhoods, each with its own council and boss.[3]

Bujumbura features a tropical savanna climate (Köppen: Aw)[4] with distinct wet and dry seasons. Its wet season is from October through April, while the dry season covers the remaining five months. Despite being located close to the equator, Bujumbura is not nearly as warm as one might expect, due to its altitude. Average temperatures are constant throughout the course of the year with the high temperature at around 29 °C (84 °F) and the low temperature at around 19 °C (66 °F).

Bujumbura's central market is in the City Centre, along Rwagasore Avenue. During the city's heavy periods of war in 1972 and 1993, as citizens had become less likely to travel far from the City Centre, markets in neighboring communities lost their business to the central market in Bujumbura. Consequently, vendors moved their business to the central market, many settling outside the market due to lack of space. However, the central market houses the largest variety of merchandise in the city, with stores that sell everything from food and sweets, to new and used clothing, shoes and consumer goods such as soap, detergent, school supplies and household accessories.

On the dawn of January 27, 2013 a serious fire ravaged Bujumbura's central market.[7] Due to poor emergency response, the fire lasted for hours, resulting in a serious blow to local exchanges. Hundreds of vendors, local and foreign, lost their goods to the fire and the reported looting.[8] While Burundi's emergency services were unable to extinguish the blaze on their own, neighboring Rwanda sent helicopters to assist in the emergency response.[9]

Bujumbura's main attractions consist of its many beaches, parks and monuments. Some of the most popular attractions are:

This link to Lonely Planet provides some additional information, but it might be out of date: http://www.lonelyplanet.com/burundi/bujumbura

Bujumbura is the location for the city's multisport Prince Louis Rwagasore stadium. Mainly used for Football (Soccer) games, it is the country's largest stadium with 22,000 seats.

The city is also home to multiple Basketball and Tennis courts, as well as a multitude of indoor and outdoor swimming pools. 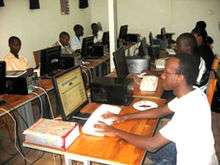 Students at the University of Burundi

The University of Burundi is in Bujumbura, as are Hope Africa University and Université du Lac Tanganyika.

The Bujumbura International Airport is situated on the outskirts of the city.

Bujumbura's taxis are abundant all over the city, and are considered the safest form of transportation. They are relatively cheap, ranging from 1500-10000 Burundian Francs (approx. $1–$6.50 USD),[10] although taxi drivers are always willing to negotiate. Even cheaper options are the city's taxi-motos (motorcycle taxis) and taxis-vélos (bicycle taxis), although they are only available in certain parts of the city.

For long distance travels, locals prefer to take the many Hiace full-size vans, which travel regularly across Burundi. Bujumbura's main bus terminal is located by the Central Market.

Bujumbura is also home to many clinics and the province's main hospitals: the Prince Regent Charles Hospital, the Roi Khaled Hospital, and the Military Hospital.

Bujumbura was also home of the independent weekly radio program Imagine Burundi, the country's first locally produced English-language program that focused on stories about life in the region. Segments included restaurant reviews and clips with job advice for students and young professionals. The show ran from September 2010 to August 2013 on 99.3 CCIB in Bujumbura, and recordings are archived on the show's website at imagineburundi.com.[11]