It was originally developed as a port for the slave trade, an important part of many European Empires at the time including the Portuguese Empire.

Porto-Novo is a port on an inlet of the Gulf of Guinea, in the southeastern portion of the country. It is Benin's second-largest city, and although Porto-Novo is the official capital, where the national legislature sits, the larger city of Cotonou is the seat of government, where most of the government buildings are situated and government departments operate. The region around Porto-Novo produces palm oil, cotton and kapok. Petroleum was discovered off the coast of the city in the 1990s, and has since then become an important export.

Porto Novo comprises two ethnic communities, the Yoruba and the Gun. Although historically the aboriginals of the area were Yoruba speaking, there seem to have been a wave of migration from the region of Allada further west, which brought Te-Agbanlin and his group to the region of Ajashe. This newcomer group brought with them their own language, and settled among the original inhabitants, their Yoruba hosts. It would appear that each ethnic group has since maintained their ethnic nationalities without one group being linguistically assimilated into the other. Towards the end of the 19th century, the city came under French imperialistic ambitions and sphere of influence. Consequently, a community that had previously exhibited endoglossic bilingualism now began to exhibit exoglossic bilingualism, with the addition of French to the language repertoire of the city's inhabitants. Unlike the city's earlier Gun migrants however the French sought to impose their language in all spheres of life and completely stamp out the use and proliferation of indigenous languages.

Under French colonial rule, flight across the border to British ruled Nigeria in order to avoid harsh taxation, military service and forced labor was perennial. Of note is the fact that the Nigeria-Benin southern border area arbitrarily cuts through contiguous areas of Yoruba and Egun speaking people. A combination of all the afore mentioned facts of history, coupled with the fact that the city itself lies within the sphere of Nigerian socio-economic influence have made Porto Novians develop an attitude and characteristics suggesting a preference for some measure of Bi-Nationality or dual citizenship, with the necessary linguistic consequences, for example, Nigerian home video films in Yoruba, with English subtitles have become extremely popular in Porto Novo and its suburbs.

Porto-Novo was once a tributary of the Yoruba kingdom of Oyo,[4][5] which had offered it protection from the neighbouring Fon, who were on the business of expanding their influence and power in the region, and the Yoruba community in Porto Novo today continue to remain one of the two ethnicities aboriginal to the city. The city was originally called Ajashe by the Yorubas, and Hogbonu by the Guns. It was renamed by the Portuguese in the 16th century[4] to Porto Novo (of Portuguese origin), meaning "New Port." It was originally developed as a port for the slave trade.[6] In 1861, the British, who were active in nearby Nigeria, bombarded the city, which persuaded the Kingdom of Porto-Novo to accept French protection in 1863.[7] The neighbouring Kingdom of Dahomey objected to French involvement in the region and war broke out between the two states. In 1883, Porto-Novo was incorporated into the French "colony of Dahomey and its dependencies." In 1900, it became Dahomey's capital city.

The kings of Porto-Novo continued to rule in the city, both officially and unofficially, until the death of the last king, Alohinto Gbeffa, in 1976. From 1908, the king held the title of Chef supérieur.

Many Afro-Brazilians settled in Porto-Novo following their return to Africa after emancipation in Brazil. Brazilian architecture and foods are important to the city's cultural life.

Parliament building of Benin in Porto-Novo

Benin's parliament (Assemblée nationale) is located in Porto-Novo and the city is the official capital but Cotonou is the seat of government where most of the governmental ministries are located.

Porto-Novo has a cement factory. The city is home to a branch of the Banque Internationale du Bénin, a major bank in Benin, and the Ouando Market.

In 2016, Porto-Novo is to be served by an extension of the Bénirail train system. Privately owned motorcycle taxis known as zemijan are used throughout the city.[8] The city is located about 40 kilometres (25 miles) away from Cotonou Airport which has flights to major cities in West Africa and Europe.

Porto Novo had an estimated population of 234,168 in 2005. The residents are mostly Yoruba and Ogu people (also Egun), as well as from other parts of the country, and from neighboring Nigeria. 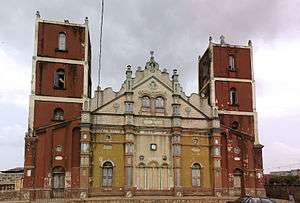 The Grande Mosque in Porto-Novo

Other sites of interest include a Brazilian-style mosque, and the Institute of Higher Studies of Benin. The Stade Municipale and the Stade Charles de Gaulle are the largest football stadiums in the city.

Adjogan music is endemic to Porto-Novo.[11] The style of music is played on an alounloun, a stick with metallic rings attached which jingle in time with the beating of the stick. The alounloun is said to descend from the staff of office of King Te-Agdanlin. The music is played to honor the King and his ministers. The music is also played in the city's Roman Catholic churches, but the royal bird crest has been replaced with a cross.