Mbabane (/(əm)bɑˈbɑn(i)/, Swazi: ÉMbábáne) is the capital and largest city in Swaziland. With an estimated population of 94,874 (2010), it is located on the Mbabane River and its tributary the Polinjane River in the Mdzimba Mountains. It is located in the Hhohho Region, of which it is also the capital. The average elevation of the city is 1243 meters. The population (estimated) in 1987 was 30,000.[1] It lies on the MR3 road.

The town grew after the nation's administrative centre moved from Bremersdorp (now called Manzini) in 1902. It derives its name from a Chief, Mbabane Kunene, who lived in the area when British settlers arrived.

Mbabane's closest border crossing to South Africa is Ngwenya-Oshoek, and though Swazi is the primary language, English is widespread. Mbabane, and Swaziland itself, depend on tourism and sugar exports. It is also a commercial hub for the surrounding region, while tin and iron were mined nearby. The city has two sites for light industries.

Mbabane is the home of the Waterford-Kamhlaba United World College of Southern Africa, as well as one of the three campuses of the University of Swaziland. Limkowking University of Creative Technology is a private international university that lies by the South African-Swaziland border with several university candidates from Swaziland. Indingilizi Gallery is an art gallery in Mbabane, established in 1982 and showcases a range of Swazi art, including sculptures, paintings, batiks, mohair, ethnic jewellery and pottery.[2]

Mbabane is located in the district of Hhohho, of which it is also the capital, and lies on the Mbabane River and its tributary the Polinjane River in the Mdimba Mountains. The average elevation of the city is 1243 meters. Neighbourhoods and suburbs include Mbangweni, Sidwashini, Kent Rock, Sandla, Westridge Park, Malunge, New Checkers, Msunduza and Vukutentele.

Due to its altitude, Mbabane features a moderate subtropical highland climate (Cwb). The city has a mild climate and snow is a rare event, which has occurred only 3 times since 1900. The city averages only four days of frost a year. The average temperature is 11 °C (52 °F) in July and 22 °C (72 °F) in January.[3] 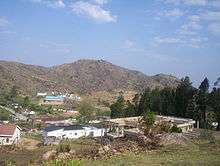 Mbabane is twinned with: