Windhuk ; Khoekhoe: ǀAiǁgams; Otjiherero: Otjomuise) is the capital and largest city of the Republic of Namibia. It is located in central Namibia in the Khomas Highland plateau area, at around 1,700 metres (5,600 ft) above sea level, almost exactly at the country's geographical centre. The population of Windhoek in 2011 was 325,858, growing continually due to an influx from all over Namibia.

The town developed at the site of a permanent spring known to the indigenous pastoral communities. It developed rapidly after Jonker Afrikaner, Captain of the Orlam, settled here in 1840 and built a stone church for his community. In the decades following, multiple wars and armed hostilities resulted in the neglect and destruction of the new settlement. Windhoek was founded a second time in 1890 by Imperial German Army Major Curt von François, when the territory became colonised by Germany.

Windhoek is the social, economic, political, and cultural centre of the country. Nearly every Namibian national enterprise, governmental body, educational and cultural institution is headquartered here.

The city of Windhoek is traditionally known by two names: ǀAiǁGams, (Khoekhoe: hot springs) and Otjomuise[3] (Otjiherero: place of steam). Both traditional indigenous names refer to the hot springs near today's city centre.

Theories vary on how the place got its modern name of Windhoek. Most believe it is derived from the Afrikaans word wind-hoek (wind corner). Another theory suggests that Captain Jonker Afrikaner named Windhoek after the Winterhoek Mountains at Tulbagh in South Africa, where his ancestors had lived. The first known mention of the name Windhoek was in a letter from Jonker Afrikaner to Joseph Tindall, dated 12 August 1844.[4]

In 1840 Jonker Afrikaner established an Orlam settlement at Windhoek.[5] He and his followers stayed near one of the main hot springs, located in the present-day Klein Windhoek suburb.[6] He built a stone church that held 500 people; it was also used as a school. Two Rhenish missionaries, Carl Hugo Hahn and Franz Heinrich Kleinschmidt, started working there in late 1842. Two years later they were driven out by two Methodist Wesleyans, Richard Haddy and Joseph Tindall.[7][8] Gardens were laid out and for a while Windhoek prospered. Wars between the Nama and Herero peoples eventually destroyed the settlement. After a long absence, Hahn visited Windhoek again in 1873 and was dismayed to see that nothing remained of the town's former prosperity. In June 1885, a Swiss botanist found only jackals and starving guinea fowl amongst neglected fruit trees.[9]

Windhoek at the end of the 19th century

Sanderburg, one of the three castles of Windhoek

In 1878, Britain annexed Walvis Bay and incorporated it into the Cape of Good Hope colony in 1884, but Britain did not extend its influence into the interior. A request by merchants from Lüderitzbucht resulted in the declaration of a German protectorate over what was called German South-West Africa in 1884. The borders of the German colony were determined in 1890 and Germany sent a protective corps, the Schutztruppe under Major Curt von François, to maintain order. Von François stationed his garrison at Windhoek, which was strategically situated as a buffer between the Nama and Herero peoples. The twelve strong springs provided water for the cultivation of produce and grains.

Colonial Windhoek was founded on 18 October 1890, when von François fixed the foundation stone of the fort, which is now known as the Alte Feste (Old Fortress).[10] After 1907, development accelerated as indigenous people migrated from the countryside to the growing town to seek work. More European settlers arrived from Germany and South Africa. Businesses were erected on Kaiser Street (presently Independence Avenue), and along the dominant mountain ridge over the city. At this time, Windhoek's three castles, Heinitzburg, Sanderburg, and Schwerinsburg, were built.

The German colonial era came to an end during World War I when South African troops occupied Windhoek in May 1915 on behalf of the British Empire. For the next five years, a South African military government administered South West Africa. It was assigned to the United Kingdom as a mandate territory by the newly formed League of Nations, and South Africa administered it. Development of the city of Windhoek and the nation later to be known as Namibia came to a virtual standstill. After World War II, Windhoek's development gradually gained momentum, as more capital became available to improve the area's economy.

After 1955, large public projects were undertaken, such as the building of new schools and hospitals, tarring of the city's roads (a project begun in 1928 with Kaiser Street), and the building of dams and pipelines to stabilise the water supply.[9] The city introduced the world's first potable re-use plant in 1958, treating recycled sewage and sending it directly into the town's water supply.[11]

Windhoek pro forma received its town privileges on 18 October 1965 on the occasion of the 75th anniversary of the second foundation of the town by von François.[12]

Since independence in 1990, Windhoek has remained the national capital, as well as the provincial capital of the central Khomas Region. Since independence and the end of warfare, the city has had accelerated growth and development.

Expanding the town area has – apart from financial restrictions – proven to be challenging due to its geographical location. In southern, eastern and western directions, Windhoek is surrounded by rocky, mountainous areas, which make land development costly. The southern side is not suitable for industrial development because of the presence of underground aquifers. This leaves the vast Brakwater area north of town the only feasible place for Windhoek's expansion.[13]

Windhoek's City Council has plans to dramatically expand the city's boundaries such that the town area will cover 5,133.4 square kilometres (1,982.0 sq mi). Windhoek would become the third-largest city in the world by area, after Tianjin and Istanbul, although its population density is only 63 inhabitants per square kilometre.[14]

Windhoek is divided into different suburbs:[15]

Windhoek experienced climate transition between hot semi-arid to cold semi-arid climate (BSh/BSk) according to Köppen climate classification as the annual temperature is slightly above 18 °C (64 °F). The temperature throughout the year seems to be temperate due to altitude influence. The annual average high and low temperature range is 13.6 °C (24.5 °F). The coldest month is July with average temperature 13.1 °C (55.6 °F), while the hottest month is December with average temperature 23.5 °C (74.3 °F). Precipitation is abundance during summer season and minimum during winter season. Precipitation total is 367.4 millimetres (14.46 in). Thanks to its location near Kalahari Desert, the city receives 3605 hours of sunshine.

Windhoek is the only self-governed settlement in Khomas Region. It is governed by a multi-party municipal council that currently has fifteen seats.[18] Council is highest decision making body of the Windhoek municipality. The Council meets once a month (each last Wednesday of the month) to consider items recommended to it by the Management Committee. In making decision, Council may endorse or change any recommendation. As a democratic principle, Council decisions are taken collectively and councillors are bound by such decisions. As individuals, council members have no administrative authority. They cannot give orders or otherwise supervise City employees unless specifically directed to do so by the Council. The Council, however, has complete authority over all administrative affairs in the city. Council members devote their official time to problems of basic policy and act as liaisons between the City and the general public. Council members are concerned, not only with the conduct of daily affairs, but also with the future development of the city.

The city is the administrative, commercial, and industrial center of Namibia. A 1992/93 study estimated that Windhoek provides over half of Namibia's non-agricultural employment, with its national share of employment in utilities being 96%, in transport and communication 94%, finance and business services 82%.[20] Due to its relative size[21] Windhoek is, even more than many other national capital cities, the social, economic, and cultural centre of the country. Nearly every national enterprise is headquartered here. The University of Namibia is, too, as are the country's only theatre, all ministry head offices, and all major media and financial entities.[22] The governmental budget of the city of Windhoek nearly equals those of all other Namibian local authorities combined.[23] Several shopping malls were built in the post-independence era, including Maerua Mall, Wernhil Park Mall and The Grove Mall.[24]

Due to Windhoek's proximity to Hosea Kutako International Airport, Windhoek serves an important role in Namibia's tourism. The report on Namibia Tourism Exit Survey 2012 - 2013, produced by the Millennium Challenge Corporation for the Namibian Directorate of Tourism, indicates that 56% of all tourists visiting Namibia during that time period, visited Windhoek.[25] In addition hereto, many of Namibia's tourism related parastatals and governing bodies such as Namibia Wildlife Resorts, Air Namibia and the Namibia Tourism Board as well as Namibia's tourism related associations such as the Hospitality Association of Namibia[26] are headquartered in Windhoek. Windhoek is also home to a number of notable hotels such as Windhoek Country Club Resort and Arebbusch Travel Lodge, and some international hotel chains such as Avani Hotels and Resorts and Hilton Hotels and Resorts, that also operate in Windhoek.

In public life Afrikaans and to a lesser extent German are still used as the lingua franca even though the government only uses the English language.[27] 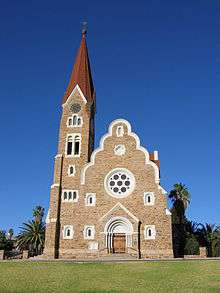 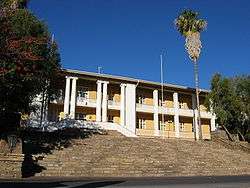 Windhoek is connected by rail to: 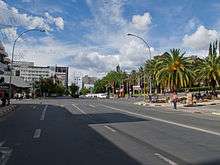 Windhoek's three main access roads from Rehoboth, Gobabis, and Okahandja are paved, and are designed to be able to withstand the largest possible flood to be expected in fifty years. Sealed roads can carry traffic moving at 120 kilometres per hour (75 mph) and should last for 20 years.

As everywhere in Namibia, public transport is scarce and transportation across town is largely done by taxi; there were 6,492 registered taxis in 2013.[37]

Windhoek is served by two airports. The closest one is Eros 7 kilometres (4.3 mi) south of the city center for smaller craft, and Hosea Kutako International Airport 42 kilometres (26 mi) east of the city. A number of foreign airlines operate to and from Windhoek. Air charters and helicopter and fixed-wing aircraft rentals are also available.

Hosea Kutako International Airport, situated 42 kilometres outside Windhoek, handles over 800,000 passengers a year. It has one runway without capacity limitations. The other international airport is located in Walvis Bay, with domestic airports at Luderitz, Oranjemund and Ondangwa. Air Namibia connects daily to Johannesburg, Cape Town and Frankfurt, with four times weekly connections to Durban via Gaborone. Air Namibia also services Harare, Lusaka and Victoria Falls. South African Airways, TAAG-Angola Airlines, and Air Namibia all have daily flights to Windhoek-Hosea Kutako International Airport, whilst Condor Flugdienst has bi-weekly turnarounds to Frankfurt and Munich (seasonal). KLM from Amsterdam connects Windhoek 3 times weekly via Luanda. Ethiopian Airlines from Addis Ababa has 3 weekly flights via Gaborone, Botswana. Qatar Airways introduced four times weekly flights between Doha and Windhoek on September 28, 2016. It was the first major carrier to introduce the Boeing 787-800 Dreamliner to Namibian aviation.

Eros Airport is the busiest airport in Namibia in terms of take offs and landings, and a domestic hub for Air Namibia.[38] This city airport handles around 12,000 individual flights a year, the majority of which are light aircraft. Primarily, limitations such as runway length, noise, and air space congestion have kept Eros from developing into a larger airport. Most of Namibia's charter operators have Eros as their base.

Many boxers such as Paulus Moses, Paulus Ambunda and Abmerk Shindjuu are from the city.

The Namibia national cricket team, the Eagles, plays the majority of its home games at the Wanderers Cricket Ground.[39] It has also played at other grounds in the city, including the United Ground and the Trans Namib Ground.[40][41] The team took part in the 2003 Cricket World Cup in South Africa, though they lost all their games. They have played in each edition of the ICC Intercontinental Cup.

The 'Tony Rust Raceway' is located west of Windhoek on the Daan Viljoen road, and reopened in 2007.[42]

The general institutions of higher education in Windhoek are:

Windhoek has 29 secondary schools and 58 primary schools.[43] Some of the notable schools are:

Windhoek has co-operation agreements and partnerships with the following towns:[48]