Victoria is the capital city of Seychelles and is situated on the north-eastern side of Mahé island, the archipelago's main island. The city was first established as the seat of the British colonial government. In 2010, the population of Greater Victoria (including the suburbs) was 26,450 out of the country's total population of 90,945.[2]

The principal exports of Victoria are vanilla, coconuts, coconut oil, fish and guano.[3] 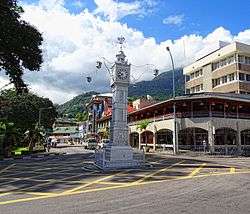 Attractions in the city include a clocktower modelled on that of Vauxhall Clock Tower in London, England,[3][4] the Courthouse, the Victoria Botanical Gardens, the Victoria National Museum of History, the Victoria Natural History Museum and the Sir Selwyn Selwyn-Clarke Market.[3] Victoria Market is the local hotspot for the Seychellois people and the brightly coloured fish and fruit markets are not to be missed. Also nearby is the gallery of the renowned local artist Georges Camille.

The city is home to the national stadium, the International School Seychelles and a polytechnic.

Victoria is served by Seychelles International Airport, completed in 1971.[3] The inner harbour lies immediately east of the town, where tuna fishing and canning forms a major local industry.[3] One of the largest bridges in Victoria was destroyed by tsunami waves from the 2004 Indian Ocean earthquake.[4]

The area that would become Victoria was originally settled in 1778 by French colonists after they claimed the island in 1756, but it was not until after the Treaty of Paris of 1814 was signed that the British formally established Victoria and gave it its modern name.[5][6]

Victoria proper is composed of parts of three Districts of Seychelles:

Greater Victoria encompasses these three, and five more of the 25 Districts of Seychelles as follows:

Victoria is twinned with:

Victoria features a tropical rainforest climate (Köppen climate classification Af) with high temperatures throughout the course of the year. The capital does have noticeably wetter and drier periods during the year, with June and July being its driest months and December through February being the city's wettest months. However, since in no month does the average monthly precipitation falls below 60 mm in Victoria, the city does not have a true dry season month. This lack of a true dry season month is a primary reason why the climate falls under the tropical rainforest climate category. The capital averages about 2,000 mm of precipitation annually. Although being very rainy, skies are usually clear to partly clear and completely cloudy days remain scarce throughout the year even during the rainiest months.