São Tomé is the capital city of São Tomé and Príncipe and is by far the nation's largest town. Its name is Portuguese for "Saint Thomas". The population of its agglomeration is 56,945 (2008 est.).[1]

São Tomé was founded by Alvaro Caminha in 1493. The Portuguese came to São Tomé in search of land to grow sugar. The island was uninhabited before the arrival of the Portuguese sometime around 1470. São Tomé was right on the equator and wet enough to grow sugar in wild abundance. Its proximity to the African Kingdom of Kongo provided an eventual source of slave labourers to work the sugar plantations. São Tomé is centred on a sixteenth-century cathedral. Another early building is Fort São Sebastião, built in 1575 and now the São Tomé National Museum. In 1599, the city as well as the islands were taken by the Dutch for two days and again in 1641 for a year. It was the capital of the Portuguese colony of São Tomé and Príncipe and, since São Tomé and Príncipe's independence in 1975, capital of the sovereign nation.

Important as a port, São Tomé is located on Ana Chaves Bay in the northeast of São Tomé Island, and Ilhéu das Cabras lies nearby offshore. São Tomé is located northeast of Trindade, southeast of Guadalupe and northwest of Santana. It is linked to these towns by various roadways, but especially by the highway encircling the entire island of São Tomé. It is linked to Cape Verde by a weekly ferry.

Features of the town include the Presidential Palace, the cathedral, and a cinema. The city is also home to schools, middle schools, high schools, one polytechnic, two markets, three radio stations, the public television station TVSP, several clinics and hospitals, the country's main airport - São Tomé International Airport (with direct regular scheduled flights to Angola, Gabon and Portugal as well as occasional domestic flights to Príncipe), and many squares (praças). São Tomé also serves as the centre of the island's road and bus networks. The town is well known for the tchiloli playing. 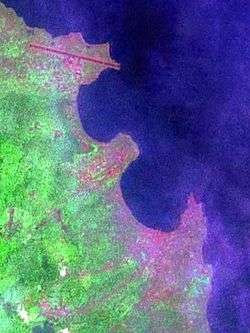 São Tomé features a tropical wet and dry climate with a relatively lengthy wet season and a short dry season. The wet season runs from October through May while the dry season covers the remaining four months. São Tomé sees on average just under 1,000 mm (39 in) of precipitation per year. Temperatures in the city are relatively constant, with average high temperatures usually around 30 °C (86 °F) and average low temperatures around 22 °C (72 °F).

The following Portuguese international schools are in the city:[3]

São Tomé is twinned with: