Not to be confused with Backcrossing, Dedomestication, or De-extinction. 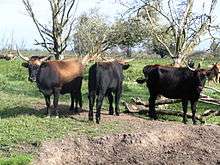 Heck cattle have been bred to resemble the aurochs in the 1920s. Since they are regarded as not meeting the criteria for "new aurochs", recent efforts such as the TaurOs Project and Uruz Project attempt to get considerably closer to the wild aurochs. 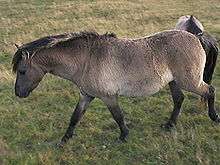 Breeding back is a form of artificial selection by the deliberate selective breeding of domestic animals, in an attempt to achieve an animal breed with a phenotype that resembles a wildtype ancestor, usually one that is extinct. Breeding back is not to be confused with dedomestication.

It must be kept in mind that a breeding-back breed may be very similar to the extinct wild type in phenotype, ecological niche, and to some extent genetics, but the initial gene pool of that wild type is lost forever with its extinction. It is not truly possible for a breeding back attempt to actually recreate an extinct wild type that is the breeding target, as an extinct wild type cannot be resurrected via selective breeding alone. Furthermore, even the outward authenticity of a bred-back type depends on the quality of the stock used as the foundation of the project. As a result, some breeds, like Heck cattle, are at best a vague look-alike of the extinct wildtype aurochs, according to the literature.[1] 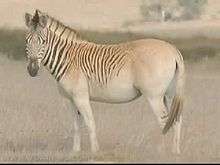 VOA report about the Quagga Project

In many cases, the extinct wild type ancestors of a given species are known only through skeletons and, in some cases, historical descriptions, so their phenotype is not directly accessible. Therefore, there is no certainty of success with a breeding back attempt and the results must be reviewed with caution. In order to test genetic closeness, both mitochondrial DNA and nuclear DNA have to be accessible. However, success is possible: humans selected only for superficial characters and as a rule did not change inner mechanisms such as digestion.[1] Further, since many domestic animals show a behaviour that is derived from their wild ancestors (such as the herding instinct of cattle or the social instincts of dogs), and are fit to survive under natural circumstances, as evidenced by the many feral populations of many domestic animals, it can be presumed that back-bred animals will function like their wild ancestors.[1] For example, food choice should be the same in domestic and wild types. Natural selection could serve as an additional tool in creating authentic robustness, behaviour and maybe also phenotype. For large herbivores, a sufficient predator population would also be necessary to support such a process, but this predator population is largely not present in today's Europe, where many breeding back projects are conducted.

There is a difference between creating a look-alike breed from domestic animals and creating a look-alike via artificial selection of individuals of a different species or subspecies that may resemble the animal that is targeted. For example, the Quagga was an independent subspecies of the plains zebra, and has no descendants which preserved its features. Thus, the Quagga Project tries to breed a look-alike out of living plains zebras which have fewer stripes than average, selecting for reduced striping. The resulting animal will bear only a superficial resemblance to the extinct Quagga.

Bred-back breeds are interesting for conservation biology since they may fill an ecological gap that has been left due to the extinction of the wildtypes due to hunting by humans. As long as food choice, behaviour, robustness, defence against predators, hunting or foraging instincts and phenotype are the same as in the wild type, it will function like it in the wilderness. Releasing such animals into the wild would fill the previously empty niche and allows a natural dynamic between the species of the ecosystem to re-evolve. However, breeding-back attempts do not always result in an animal that is closer to the wild type than other domestic breeds. For example, Heck cattle bear less resemblance to the aurochs than many Iberian fighting cattle do.[1]

Ideas for creating an aurochs-like animal from domestic cattle have been around since 1835. In the 1920s, Heinz and Lutz Heck tried to breed a look-alike using central European dairy breeds and southern European cattle. The result, Heck cattle, are hardy, but differ from the aurochs in many respects, although a resemblance in colour and sometimes also horns has been achieved.[1] From 1996 onwards, Heck cattle have been crossed with primitive Iberian breeds like Sayaguesa Cattle and Fighting cattle, and the very large Italian breed Chianina in a number of German reserves in order to enhance the resemblance to the aurochs. The results are called Taurus cattle, which are larger and more long-legged than Heck cattle and have a more aurochs-like horn shape. Another project to achieve a type of cattle that resembles the aurochs is TaurOs Project, using primitive and hardy southern European breeds and also Scottish Highland cattle. These Tauros cattle are planned to be established in various European natural reserves.

The Polish Konik horse is often erroneously considered the result of a breeding-back experiment to "recreate" the phenotype of the Tarpan, the European wild horse. The Konik is actually a hardy landrace breed originating in Poland which was called Panje horse before agriculturist Tadeusz Vetulani coined the name "Konik" in the 1920s. Vetulani did start an experiment trying to reconstruct the Tarpan using Koniks, but his stock only had a minor contribution to the modern Konik population.[2]

However, during World War II, the Heck brothers crossed Koniks with Przewalski's horses and also other ponies like Icelandic horses and Gotland ponies; the result is now called the Heck Horse. During the last decades, Heck horses have continuously been crossed with Koniks, so that their phenotype now is nearly indistinguishable, except that the Heck horse has a slenderer build on average.[3]

Besides the Konik-type horses, the Exmoor Pony that still lives in a semi-feral state in some parts of Southern England has also been claimed to be closer to the European wild horse as it carries pangare coloration and has a resemblance to the horses in Lascaux cave paintings.[4]

A Tamaskan Dog, bred to visually resemble a wolf.

Although the wolf, the wild ancestor of domestic dogs, is not extinct, its phenotype is the target of several developmental breeds including the Northern Inuit Dog and the Tamaskan Dog. They are all crossbreeds of German Shepherd Dogs and huskies, selected for phenotypic wolf characteristics. Therefore, these breeds are breeding-back attempts as well.[5]