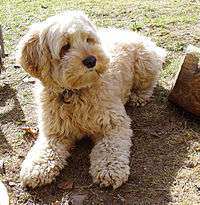 A cockapoo is a Poodle/Cocker Spaniel cross 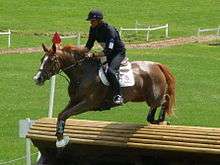 A designer crossbreed or designer breed is a crossbred animal that has purebred parents, usually registered with a breed registry, but from two different breeds. These animals are the result of a deliberate decision to create a specific crossbred animal.[1] Less often, the animal may have more than two pure breeds in its ancestry, but unlike a mutt or a mongrel, its entire pedigree is known to descend from specific known animals. While the term is best-known when applied to certain dog crossbreeds, other animals such as cattle, horses, birds and cats may also be bred in this fashion. Some crossbred breeders start a freestanding breed registry to record designer crossbreds, other crossbreds may be included in an "appendix" to an existing purebred registry. either form of registration may be the first step in recording and tracking pedigrees in order to develop a new breed.

The purpose of creating designer crossbreds is usually one or more of the following reasons:

Breeders of designer crossbreds borrow the technical language from hybrid plant breeding: A first generation, 50-50 crossbred is an F1 cross.[1] Subsequent generations may see a purebred animal crossed back on a crossbred, creating a 75/25 cross,[1] or a BC1 or F1b "backcross."[3] The breeding of two crossbreds of the same combination of breeds, creating a F2 cross, an animal that is still a 50-50 cross, but it is the second filial generation of the combination.[4] A F2 cross bred to an F2 cross creates a F3 cross. Similarly, a F2 animal bred to an F1 animal creates a F2b backcross. F3 crosses and greater are called "multi-generational" crosses.[3] In dog breeding, three generations of reliable documented breeding can be considered a "breed" rather than a crossbreed.[5]

There are disadvantages to creating designer crossbreds, notably the potential that the cross will be of inferior quality or that it will not produce as consistent a result as would breeding purebred animals. For example, the poodle is a frequent breed used in creation of designer crossbreds, due to its nonshedding coat, but that trait does not always breed true when it is part of a designer cross.[1] Also, because breeders of crossbred animals may be less careful about genetic testing and weeding out undesirable traits,[5] certain deleterious dominant genes may still be passed on to a crossbred offspring. In an F2 cross, recessive genetic traits may also return if the parent animals were both carriers of an undesired trait.