Burlington is a town in Middlesex County, Massachusetts, United States. The population was 24,498 at the 2010 census.[2] 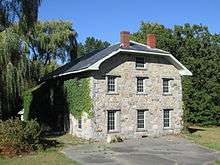 It is believed that Burlington takes its name from the English town of Bridlington, Yorkshire but this has never been confirmed[n 1] . It was first settled in 1641 and was officially incorporated on February 28, 1799; several of the early homesteads are still standing, such as the Francis Wyman House, dating from 1666. The town is sited on the watersheds of the Ipswich, Mystic, and Shawsheen rivers. In colonial times up through the late 19th century, there was industry in the mills along Vine Brook, which runs from Lexington to Bedford and then empties into the Shawsheen River.

Burlington is now a suburban industrial town at the junction of the Boston-Merrimack corridor, but for most of its history it was almost entirely agricultural, selling hops and rye to Boston and supplementing that income with small shoe-making shops. Early railroad expansion passed the town by (although the town was serviced by the Middlesex Turnpike), limiting its early development, and Burlington continued to cure hams for the Boston market and produce milk, fruit, and vegetables.

This picture changed drastically, however, as soon as Route 128 was built. The highway kicked off an enormous expansion, and between 1955 and 1965 Burlington was the fastest growing town in the state. In one five-year period, its population tripled as residential and commercial retail development exploded creating the town's present character.

Burlington has graduated many prominent athletes, including four Olympians, and others who have gone to have successful careers in the NHL, NFL, and Major League Baseball.

Located in the Greater Boston Area of eastern Massachusetts, Burlington is bordered by Bedford on the west, Billerica on the north, Wilmington on the northeast, Woburn on the southeast, and Lexington on the south. Burlington is 12 miles (19 km) south of Lowell, 12 miles (19 km) northwest of Boston, 36 miles (58 km) southeast of Fitchburg, and 224 miles (360 km) from New York City. and Its highest point is Greenleaf Mountain (290 feet (88 m) above sea level), the lowest point is the Great Meadow 150 feet (46 m) above sea level. The elevation at Town Hall is 220 feet (67 m) above sea level. The largest body of water is the 500-million-US-gallon (1,900,000 m3) Mill Pond Reservoir in the eastern part of the town.

There were 8,289 households out of which 32.6% had children under the age of 18 living with them, 65.2% were married couples living together, 9.1% had a female householder with no husband present, and 23.1% were non-families. 19.1% of all households were made up of individuals and 7.7% had someone living alone who was 65 years of age or older. The average household size was 2.76 and the average family size was 3.18.

Burlington is governed by a 126-member representative Town Meeting (18 representatives elected per precinct) and a five-member executive Board of Selectmen. The members of the Board as of early 2012 and the first election dates and terms ends are:[24]

The Burlington Recreation department offers a variety of programs for adults and children. Program brochures are mailed to residents four times a year. The recreation department distributes free passes for the town's resident only wading pool located at Simonds Park.

Route 128/ I-95 and Route 3 traverse through Burlington and motor vehicle laws are enforced primarily by the Massachusetts State Police on these roadways.

Burlington has six public schools (four elementary schools, one middle school, and one high school) which comprise the Burlington Public School District. The elementary schools are Fox Hill, Francis Wyman, Memorial, and Pine Glen. The middle school is Marshall Simonds, and one of the town parks is named after Marshall Simonds. The high school is Burlington High School. Burlington is also served by the Shawsheen Valley Technical High School. In addition it is home to several private schools.[30]

The town operates a Before and After School Program[31] and offers an integrated preschool program.[32]

Burlington is also the home to a campus of Northeastern University and one of the three campuses of Bay Path College.

Routes 128 (I-95), 3, 3A and 62 pass through Burlington. MBTA Bus routes 350, 351, 352 and 354 operated by the MBTA run through the town, as do Lowell Regional Transit Authority, Lexpress (Lexington), and B-Line (Burlington) buses. The closest MBTA 'T' subway stations are Alewife, Cambridge, 9 miles (14 km) to the south-east (the station has a large parking garage) and Wellington Station, Medford, on the Orange Line, roughly 10 miles (16 km) to the east (also has large parking garage). MBTA Commuter Rail and Logan Express services are available at the Anderson Regional Transportation Center in neighboring Woburn, about 3 miles (4.8 km) to the east.[33]

Over the last 15 years, Burlington has experienced a boom in commercial growth with the continuous expansion of the Burlington Mall and the construction of the Wayside Commons, which includes an L.L. Bean and a Capital Grille. Rounder Records now calls Burlington home. Many new buildings have been built along the town's main road, Cambridge St. (Rt. 3A), which have ushered in new technology companies. It is a relatively well-positioned town in the state — located at the intersection of Interstate 95 and US 3, Burlington is 5 minutes from I-93 and 20 minutes from I-90 as well as just 20 minutes from Boston, half an hour from New Hampshire, and an hour from Rhode Island.

Burlington is home to the Lahey Clinic Hospital and Medical Center.

Rt. 128 / I95, a circumferential highway around Boston, is considered the technology center of the East Coast. Burlington's stretch of 128, between Route 3 and Winn Street is home to numerous sizable buildings housing major companies, such as Demandware, Oracle Corporation and SAP AG and TD Bank. The major global financial software giant SunGard has an office on Van de Graff drive in Burlington. The Boston Burlington Marriott located on the corners of Mall road and Cambridge street (Route 3A) serves as a base for all traveling business workers and seasonal tourists as well as guests visiting the Lahey Clinic.

Under development or proposed

Update: In October, 2008, the Burlington Town Meeting in sum denied the sale of the land to Patriot Partners. Learn more at their website: http://landlockedforest.com/history.shtml

Patriot Partners LLC, a Framingham-based developer, is proposing to build a 250-acre (1 km2) biotech complex, the largest in the region, close to routes 3 and 128. The complex would include labs, offices, retail shops and housing units.[37] Since this new development is proposed on the site of the largest remaining area of open space, commonly called the "Burlington Landlocked Forest" (see below), there is significant resistance from the town meeting, the Conservation Commission,[38] and the general population.[39]