Daniel Joseph "Dan" Benishek (born April 20, 1952) is an American physician and politician who has been the U.S. Representative for Michigan's 1st congressional district since January 2011.[2] He is a member of the Republican Party.

Benishek was born in Iron River, Michigan in 1952,[1] the son of Helen (née Kovaleski) and Joseph Benishek. Three of his paternal great-grandparents were Bohemian (Czech) immigrants, while his maternal grandparents were Polish immigrants.[3] His father was killed in local iron mines in 1957, so Benishek was raised by his widowed mother and extended family. He worked in the family business, the Iron River Hotel, until he went to college. He graduated from the University of Michigan in 1974 with a Bachelor of Science in Zoology.[4] From there, he graduated from Wayne State University School of Medicine in 1978. Prior to his election to Congress, he was a general surgeon in the Dickinson County Healthcare System.[5] 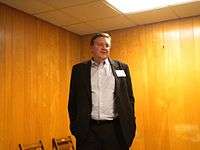 Benishek speaks at a reception at the Republican Party headquarters in Bay County.

Benishek formally announced his candidacy for Congress on March 16, 2010, running against incumbent Democrat Bart Stupak.[5] Stupak's vote in support of the Patient Protection and Affordable Care Act fueled an outpouring of support for Benishek, who had no Internet presence aside from a basic website on the day the bill was passed. He received more than $50,000 in unsolicited donations in the first 48 hours after Stupak's vote for the bill on March 21, 2010.[6][7] "It's amazing, I just can't believe it," he said regarding the support he has gotten. "I need to use this momentum to repeal this health care bill and I'm going to do it. We're going to take over, the Republicans are going to regain the House of Representatives and we're going to repeal this health care bill."[8] The American Spectator called him "The Most Popular Republican in America" on March 21, in the wake of Stupak's yea vote.[9] Stupak announced his retirement on April 9, 2010.[10][11] Benishek won the Republican primary against State Senator Jason Allen by 15 votes.[12]

Benishek faced re-election against McDowell in the 2012 election cycle. A September 20, 2012 Public Policy Polling poll showed the race as a statistical dead heat, with McDowell leading Benishek 44% to 42%.[14] Benishek was re-elected by a margin of 2,297 votes, less than 1% of the total votes cast.[15] Benishek endorsed Herman Cain in the 2012 Republican presidential primary.[16]

Benishek's opponent for the 2014 midterm elections was Democratic nominee Jerry Cannon.[17] In October 2014, the Rothenberg Political Report moved the district from one that "tilts Republican" to one that is now "Republican favored."[18] Benishek won re-election with 52% of the vote.

After temporarily considering running for a fourth term, Benishek decided not to seek re-election in 2016; he endorsed Republican State Sen. Tom Casperson as his successor.[19]

On January 4, 2013, Benishek introduced H.R. 163, a bill identical to the Sleeping Bear Dunes National Lakeshore Conservation and Recreation Act (S. 23; 113th Congress), which was introduced into the U.S. Senate by Carl Levin.[20] The bill would designate as wilderness about 32,500 acres of the Sleeping Bear Dunes National Lakeshore in the state of Michigan. The newly designated lands and inland waterways would comprise the Sleeping Bear Dunes Wilderness, a new component of the National Wilderness Preservation System.[21] Benishek expressed his pleasure that the bill "was developed locally," describing it as "the ideal way federal land management should occur, with input from the local communities."[22] The Senate version, S. 23, passed the Senate and was signed into law by President Obama on March 13, 2014.

On May 21, 2013, Benishek introduced the Demanding Accountability for Veterans Act of 2013 (H.R. 2072; 113th Congress), a bill that would require the Inspector General (IG) of the United States Department of Veterans Affairs (VA) to take additional action if the VA has not appropriately responded to an IG report that recommends actions to be taken by the Secretary of Veterans Affairs to address a VA public health or safety issue.[23] The Secretary would be required to act swiftly on such IG reports, with the bill specifying actions to take.[23] The Secretary would also be forbidden from giving any bonuses to managers with unresolved issues.[23][24] Benishek said that the bill targets "bureaucrats in Washington who drag their feet and don't do their jobs."[24]

Benishek favors reduced government spending and a smaller government, and is pro-life and pro-gun rights.[25] In 2014, he received an A+ grade from the National Rifle Association Political Victory Fund.[26] He supports term limits and said before he was elected in 2010, "I am happy to tell voters I strongly favor term limits. Three terms and you’re retired seems about right to me." He was also a signatory to a pledge by U.S. Term Limits that would impose a three-term limit on Congressmen.[27] However, in March 2015, Benishek announced he would break that pledge and run for a 4th term.[28] In September 2015, he reverted course, announcing that he would in fact retire at the end of his current term rather than seeing re-election in 2016.[29] In healthcare reform, he supports tort reform and allowing insurance companies to compete across state lines without federal regulation.[30] He opposes federal funding for elective abortions.[31] He supports lower taxes and increased border security.[32] Benishek dismisses the scientific consensus on climate change.[33][34][35]

Benishek lives with his wife Judy in Iron County. They have five children. They also have four grandchildren.[37]