This article is about the district. For its eponymous headquarters, see Dharmapuri, Tamil Nadu.

The earliest known chieftain who ruled Tagadur (present Dharmapuri) during the Sangam era, is Adiyaman Naduman Anji, whose patronage sustained the famous Tamil poet Avvaiyar. The region is believed to have been controlled by the Pallava regime in the 8th century.

During 18th century present day dharmapuri district was under Mysore kingdom and it was called as Baramahal, As per treaty of Seringapatam (signed on 18 March 1792) after Third Anglo-Mysore War, tipu sultan agreed to give part of his territories including the present dharmapuri district to The British East India Company which was then merged into madras presidency

The Dharmapuri district was bifurcated into present-day Dharmapuri and Krishnagiri districts in 2004.[2] Many historical rock sculptures are found in this district. Modhur,a village near dharmapuri has remains that dates back to neolithic age.A government museum in dharmapuri town displays some of these significant sculptures for people's view.

The district is located between latitudes N 11 47’ and 12 33’ and longitudes E 77 02’ and 78 40’. Occupies an area of 4497.77 km² (i.e. 3.46% of Tamil Nadu) and has a population of 2,856,300 (as of 2001). It is bounded on the north by Krishnagiri District, on the east by Tiruvannamalai District and Viluppuram District districts, on the south by Salem District, and on the west by Karnataka's Chamarajanagar District. The Whole district is surrounded by hills and forests.The terrain of dharmapuri is of rolling plains type. Dharmapuri is located on the geographically important area in south India.

The climate of the Dharmapuri District is generally warm. The hottest period of the year is generally from the months of March to May, the highest temperature going up to 38 C in April. The Climate becomes cool in December and continuous so up to February, touching a minimum of 12 C in January. On an average the District receives an annual rainfall of 895.56 mm.

The whole district is predominantly covered with forests.Spider valley located near hogenakkal is home for many wild animals. The district falls in the migratory path of elephants.Man and elephant conflicts are most common in these parts.Many tribal communities depend on these forests.Vathalmalai,a mountain hamlet on top of shervarayan hill chain has suitable conditions to cultivate coffee and jack fruit. Wild boars and spotted deers are commonly seen in morappur and harur forest region. Gaurs sometimes stroll near villages near bommidi region.Thoppur ghat section has one of the scenic highways surround by mountains and forests. This district lies in a geography where both Western and Eastern ghats make their presence.

Dharmapuri is the district headquarters. The district has been divided into two revenue divisions namely Dharmapuri and Harur consisting 5 taluks. 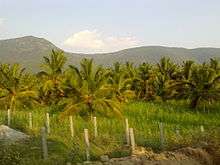 The district economy is mainly agrarian in nature. Nearly 70% of the workforce is dependent on agriculture and allied activities. The district is one among most backward and drought prone area in the state.

Dharmapuri district also forms a major horticultural belt in the state. As the area is drought – prone it has become essential to switch over to cultivation of drought tolerant perennial fruit crops in this district. Mango is the main horticulture crop of this District. It has the highest area under the fruit crops .Dharmapuri and krishnagiri districts accounts for more than 60 -70 % total mango production in TamilNadu [7] The district accounts for nearly one-third area under mango and nearly one-half of the mango yield in the state. Palacode is the main area where tomato is cultivated. Chilli is cultivated mainly at Pennagaram. It is the major producer of Ragi and saamai crops in the state.

Exotic crops like dates are also being cultivated by some farmers in the areas around ariyakulam.

Recognizing the vast scope for development of Horticulture in the state, tamilnadu government had initiated a new Department of Horticulture and Plantation Crops was created on September 26, 1979 with headquarters at Dharmapuri and was headed by a senior officer of the department. The Directorate was shifted to Chennai, LLA Building on Anna Salai in 1992.[8]

Dharmapuri being an inland district, fishing is restricted to inland only here. Main varieties of fish available are katla, rogu, mirgal, common and corp. Fishing is also being practised in cauvery river banks.

Dharmapuri district is endowed with sizeable reserves of granite. High quality black granite is available in Pennagaram, Harur and Palacode blocks. Quartz is available at Kendiganapalli Village of Pennagaram Taluk, A.Velampatti of Harur taluk and Pethathampatti of Pappireddipatti Taluk. Another High value mineral available here is Molibdinum, which is identified as a good conductor. It is available in Harur.

Almost 40% Peoples of the district move to near metro cities like chennai,bengaluru for job, by buses,trains, where the district has no industries or enough water facilites for farming even though the river kaveri flows on the west.

Establishing of Industrial centres such as SIPCOT,SIDCO.And connecting of KRP dam to Thumbhalahalli dam Via :Enkolpudur will increase the economy of the district.

Tourism in Dharmapuri district is a fast expanding industry. The Kaveri river flows into the state through the district, and Hogenakkal, a town situated 46 km from Dharmapuri is the site where the river drops into as a scenic waterfall.

Another important tourist destination in the state is the hill-temple at Theerthamalai in Harur taluk which is a sacred religious place for the Hindus, and which had been existent right from the times of the Chola and the Vijayanagara empires.[9]

Vathalmalai or Vytla Hills (Tamil: வத்தல்மலை) is a Village in Dharmapuri taluk and Dharmapuri district in Tamil Nadu having an area measuring nearly 225 km². Most of the native flora and fauna of Vytla have disappeared due to severe habitat fragmentation resultant from the creation of the plantations. However, some species continue to survive and thrive in several protected areas nearby, include Sheverayan Hills (Yercaud). These protected areas are especially known for several threatened and endemic species including Nilgiri Thar, the Grizzled Giant Squirrel, the Nilgiri Wood-pigeon, the Gaur, wild pig, the Nilgiri langur, the Sambar, and the Neelakurinji (that blossoms only once in twelve years). It is a small village situated at 3600 ft height (MSL). It is 25 km away from Dharmapuri Town (17 km to reach bottom of the hill and 8 km to hill top).

'Hogenakkal Falls or Hogenakal Falls' is a waterfall in South India on the river Kaveri. It is located in the Dharmapuri district of the southern Indian state of Tamil Nadu,[1][2][3][4][5][6] about 180 km (110 mi) from Bangalore and 46 km (29 mi) from Dharmapuri town.[7] It is sometimes referred to as the "Niagara of India". With its fame for medicinal baths and hide boat rides, it is a major tourist attraction. Carbonatite rocks in this site are considered to be the oldest of its kind in South Asia and one of the oldest in the world.[8] This is also the site of a proposed project to generate drinking water. Boating in Hogenakkal is allowed during the dry-season as the water falls are not strong enough to disrupt the passage of the boats. This is the main source of income for these boat operators. The coracles are about 2.24 m (7 ft 4 in) in diameter, but still can take a load of eight persons at a time.[12] These coracles are made of bamboo, and with all materials available takes about a day to build. The bottom of the boats are made waterproof by the use of hides, but sometimes with sheets of plastic.[13] Use of plastics in the Hogenakkal vicinity, not just for boats, has been criticised due to problems with pollution.[14] These boats are steered and propelled using a single paddle, making them unique. The coracles are locally called parisal in Tamil and either teppa[15] or harigolu in Kannada.

Freshly caught fish are sold by the gorge and also various vendors selling water and snacks up and down the gorge rowing their coracles is not uncommon. The fish caught include katla, robu, kendai, keluthi, valai, mirgal, aranjan and jilaby. After leaving the gorge, on the left shore one can find improvised stalls set up on the sand. There, one can let the fresh fishes be prepared in one of the many kitchens. Also, many people can be found swimming or bathing around there.